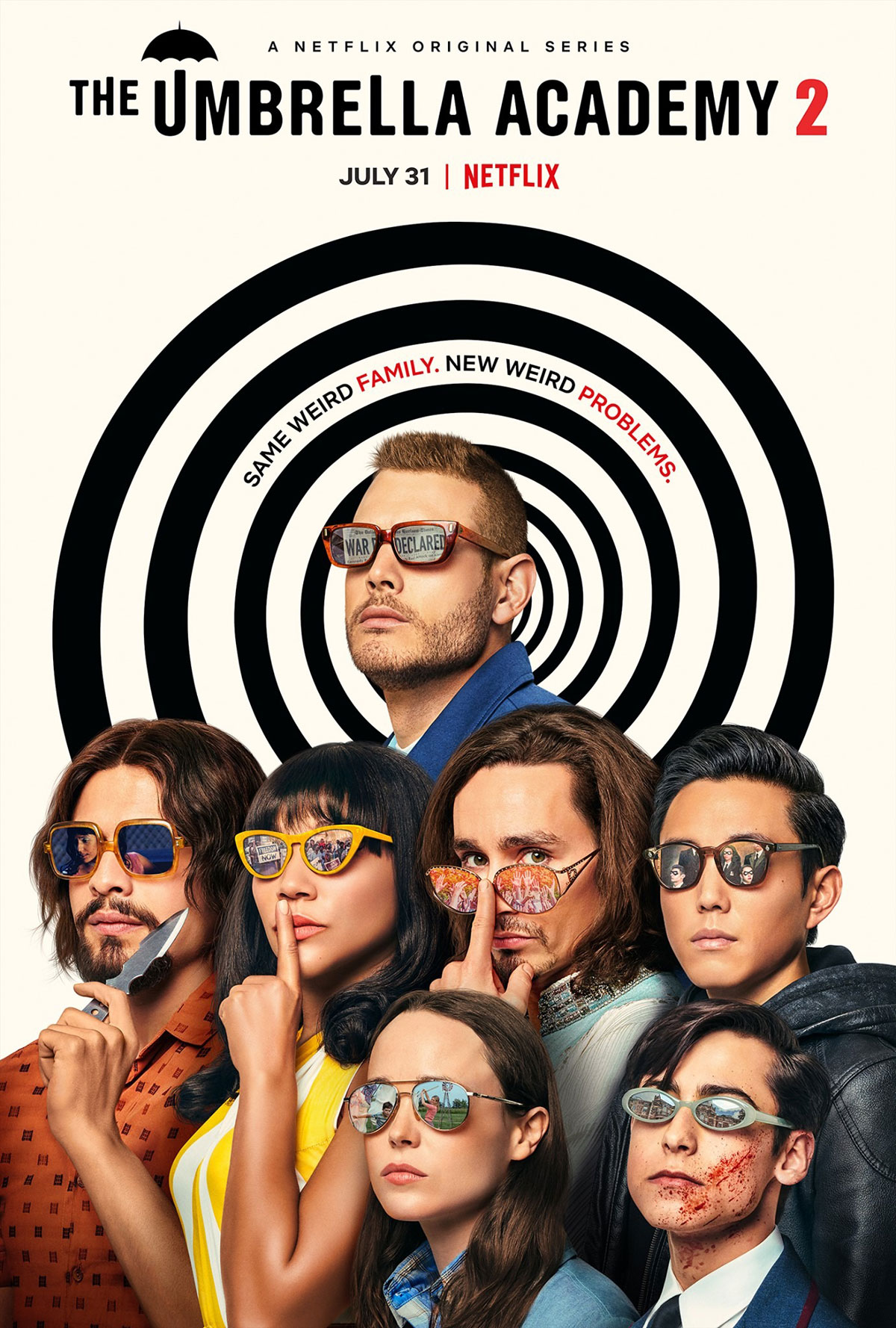 Admittedly The Umbrella Academy was a series I initially decided to watch to find something to bond over with Hipster Jr. Jr. She’s generally a fan of superhero type stuff (Marvel only, though, as she just kind of rolls her eyes at DC stuff) and this seemed to kind of cleave close to that genre. Plus, she played a School of Rock show that featured a My Chemical Romance song (bassist Gerard Way wrote the comic book series on which the show is based), so she at least had a passing awareness of their music. Turns out I’m a pretty horrendous parent and often times found myself wishing that my ten-year-old daughter wasn’t peeping the kind of bloody violence happening on screen in season one. Whoops.

The funny thing is, I ended up watching season two without her. I think I just kind of forgot she existed. Or at least the fact that she’d seen season one with me. Or I with her. Whatever the case, I’m reasonably sure she’d like this second season less. I liked it less. And that’s only because the backstory of this family of misfits made for the most interesting material. And I know that the backstory is the cliche of all superhero type stuff, but in this case it works. Because they didn’t just kind of show us that backstory and move on,. They wove it in to every characters’ development. And it’s this development, and not so much their powers, that makes for fun TV.

So now, in season two, we kind of know who these characters are. The mystery behind this group of disparate people who were all collected as children by what amounts to a mad scientist and raised as a twisted family unit is laid bare. That means that they need to now take all that and give them their first adventure. Not that there wasn’t adventure in the first season, as they tries to stave off the apocalypse while investigating their father’s murder, but this one has to be something a little different.

Turns out their idea of adventure involves time travel and the Kennedy assassination. I will admit that I was a Kennedy assassination conspiracy theorist as a kid. My dad had books around the house that I picked up and read. I thought Gerald Posner’s Case Closed was a total crock. And I ate up Oliver Stone’s JFK and Don Delillo’s Libra. That said, this topic has been pretty worn out by 2020. Shit, I just watched Stephen King’s 11.22.63 earlier this year (after reading the novel back in 2013.) There’s just not much more story to ring out of that sponge. Also — and I can’t believe I’m saying this — I’ve almost had enough time travel stuff at this point. I know, it’s shocking. I love time travel stuff. But after watching season three of Dark and the third season of Legion over the summer, I’m just not sure how much more of it my brain can take.

What typically happens in time travel movies or shows is that the narrative becomes more about the time travel than anything else. There are all these rules and the characters are always admonishing each other about not doing anything to change the future. The butterfly effect, as it is. Or you can just take the whole “the future won’t let you change it” tack. Which I suppose frees up some of the rules. Whatever the case, The Umbrella Academy kind of took a hodge-podge (which is where most end up) and instead focused on some elements of life in 1963. Namely the civil rights movement, the cult-y beginnings of the hippie revolution, gay rights and some others. It made the whole season feel a little disjointed in that way, as the splinter stories were either interesting or they weren’t. Ellen Page’s character, for instance, is involved in this whole forbidden lesbian love storyline, which would be lovely in another show, but just came across as a little too sincere and serious for a series that is ostensibly a comedy of sorts. Or it  least interjects a lot of humor in most of its storylines. They also steal their “Swedes” pretty directly from The Big Lebowski, which I totally get.

Now if one was able to kind of excise those narratives that were less in line with the rest of the program, you’d have yourself a pretty entertaining piece of pop culture. I didn’t love the idea of the whole season essentially having the same plot as the first — attempting to stop the Apocalypse, but in the 1960s — but the frantic attitude, sometimes-stunning visuals and general why-the-fuck-not take on things is certainly worth the ten-episode investment. I wouldn’t say it tries to be high art, but definitely creates a world that is wild and wacky enough to put a smile on the face of kids of all ages.