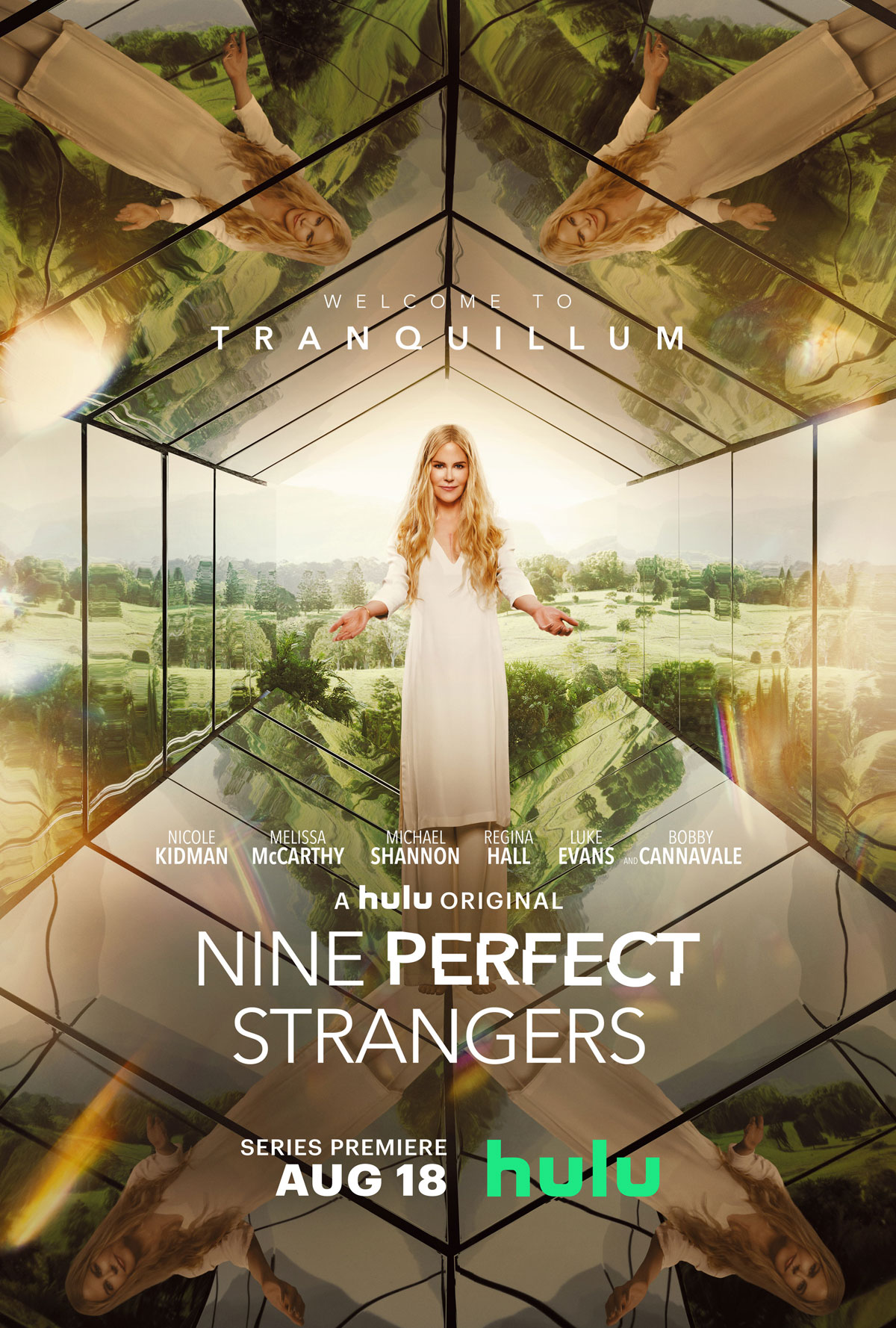 It’s been a mere two weeks since this series ended, and I feel like it never happened. I wouldn’t say it was a like a bad trip, but it was certainly a fleeting experience. Like nitrous, I suppose. Yes, Nine Perfect Strangers is the nitrous oxide of drug trips. Because, ultimately, this show kind of devolves into an oddball commentary on micro and macrodosing. I think? Frankly, that was my problem with the show. I watched, expecting it to reveal itself to be something more than what it was. Or expose a unique POV or deeper mystery in its disjointed storytelling. And it just didn’t.

Starting with the plot, we’re already thrown into this “just go with it” mindset. I mean, I have a hundred questions just based on the core narrative of nine people being invited to this very expensive retreat, Tranquillum House, in California run by a weird Russian lady named Masha (Nicole Kidman). Apparently none of these people bothered to Google the place, look on Yelp or Tripadvisor or do any sort of research of any sort before paying what we gather is an exorbitant amount to go to this place. Some of the folks go on their own, some are maybe court ordered and the one family is sponsored in some way. Again, not real clear why this place — which has had some seriously questionable problems in its past — was prescribed, ordered or agreed to in the first place. But, hey, why bother with explanations when you can just get into the drug stuff? Because it turns out that Masha’s whole approach to whatever it is she’s trying to do with people is putting drugs in their smoothies. No magic, no strategy. Just microdoses of drugs. Weird.

So why bring together this particular group of people? It’s hard not to spoil things by pointing out how bad Masha fucks up by bringing these particular folks in. Literally, of the 7.75 billion people on Earth, she invites at least two of the worst people she could have invited. It makes no sense. And runs this retreat with what seems like only three staff. A retreat that, once again, is supposed to be in California, but is so clearly in Australia it’s almost laughable. I mean the foliage looks prehistoric; like stuff out of Jurassic Park. Mind you, it’s cool looking, but most definitely not the CA, let alone anywhere in the US. I think we’re supposed to follow the unfolding of the narrative, wondering why these seeming strangers were all brought together — which would make a lot of sense — but that is never paid off. Not at all. That, honestly, is what really killed the show for me. We’re used to these tightly crafted plots, where there’s a central mystery that is gradually revealed to us and then — bam! — we’re hit with the truth behind everything at the crescendo and our investment is paid off. I think they thought they did a little bit of that here, but the “reveal” that they focus on was pretty obvious from the first or second episode.

And then there’s Kidman’s accent. Oy. Have we not realized, after such monumental failures by actors like John Malkovich in Rounders and, the worst of all time, Dennis Hopper on 24, that doing Russian accents well is really hard? Kidman is a wonderful actress, but her Russian accent is somehow more distracting than her new-ish face. And, look, I know Nine Perfect Strangers was a novel before it was this show, and presumably the character is Russian in the book, but why not make her British or even Australian in the series? Or keep her Russian and let Kidman use a vaguely British accent (which, as an Aussie she can probably do) like they do to represent “foreign” accents all the time. It’s just bad enough that it takes you out of a show that already has some issues keeping your attention.

Anyway, I do want to point out that the acting is spot-on for the most part. The fact that Kidman is kind of the worst part about it is interesting only in the fact that she has become more of that kind of actor. The kind that can’t just “act.” Where you have the completely weird, but wonderful performance of Michael Shannon, and a writer finally finding a role for Bobby Cannavale that isn’t completely overwrought or stupidly serious or strange. In fact, the best scenes in the show are those between Cannavale’s ex-football-star pill addict, Tony, and Melissa McCarthy’s pop novelist, Frances. Their 1940’s hate spats, followed by a warming and eventual will-they-or-won’t-they scenes of comic relief and genuine feeling are by far the most compelling and entertaining of any the show’s relationships. I’d watch a show called Tony and Frances Visit an Ashram any time. But unfortunately we have these other people hanging around. The young couple, Jessica (Samara Weaving) and Ben (Melvin Gregg), seem to serve no other purpose than to put a couple beautiful people on screen. Their story feels tacked on — and it’s completely unclear why they’re there. And the confusing Luke Evans role, which is endlessly silly. He’s an undercover reporter, maybe, but also somehow had the money to come to this place? And he’s going to expose her drug treatments or maybe a past death or something? Or maybe he’s just there because he is hesitant to have a child with his boyfriend? I don’t know, man, it’s nonsense.

The only people who seem to be there for a reason is Shannon and his family, wife Heather (Asher Keddie) and daughter Zoe (Grace Van Patten). And their dead son, Zach, who is played by a very odd-looking actor that Ms. Hipster and I originally thought was a specific choice, but figured out later was just how the actor always looks. Being a supposed twin of Zoe’s, you’d figure that even as fraternal twins, they might pick someone who looked even in the universe of Van Patten. But I thought Van Patten was Shailene Woodley when the show started anyway, so I clearly don’t understand genetics. Apparently David E. Kelly has a look that he likes in his younger actresses. But it’s clear from moment one why this family is there, invited by Masha gratis and then plied with psychedelics like the rest of the folks. I mean, maybe the other six people at the retreat aren’t there for a reason. Well, other than to act as a smokescreen to cover the fact Masha only really cares about these three people in the Marconi family. Making Shannon’s character’s name Napoleon Marconi. Ridiculous.

I went in engaged. I thought the show was going to be another mystery box thing where we’d be exposed to Masha’s past and what her plan is with this group of disparate people. Is she an ancient vampire (her accent says yes) or a conniving international business woman looking to do some advanced analytics on Americans? Nope. It turns out it’s yet another show about trauma and loss. That’s about it. But not done as well as the other one million premier shows out there that mine the same landscape. The magic isn’t magic. The mystery isn’t so much of a mystery. It’s drugs and human interactions and luck. And the saggy middle of the series, where characters are just walking around fields stoned just doesn’t do it for me. And the twist that they throw in with one of the characters and the mysterious threatening calls Masha keeps getting is so kind of thrown in there that it barely makes a whisper of a difference. That all said, they will most likely turn this thing into an anthology series and have another group of nine come to the retreat. But they really need to fix the underpinnings of this plotting to make the nine actually mean something. Because now it’s very loose and not at all a cohesive piece of art I have any interest in revisiting.