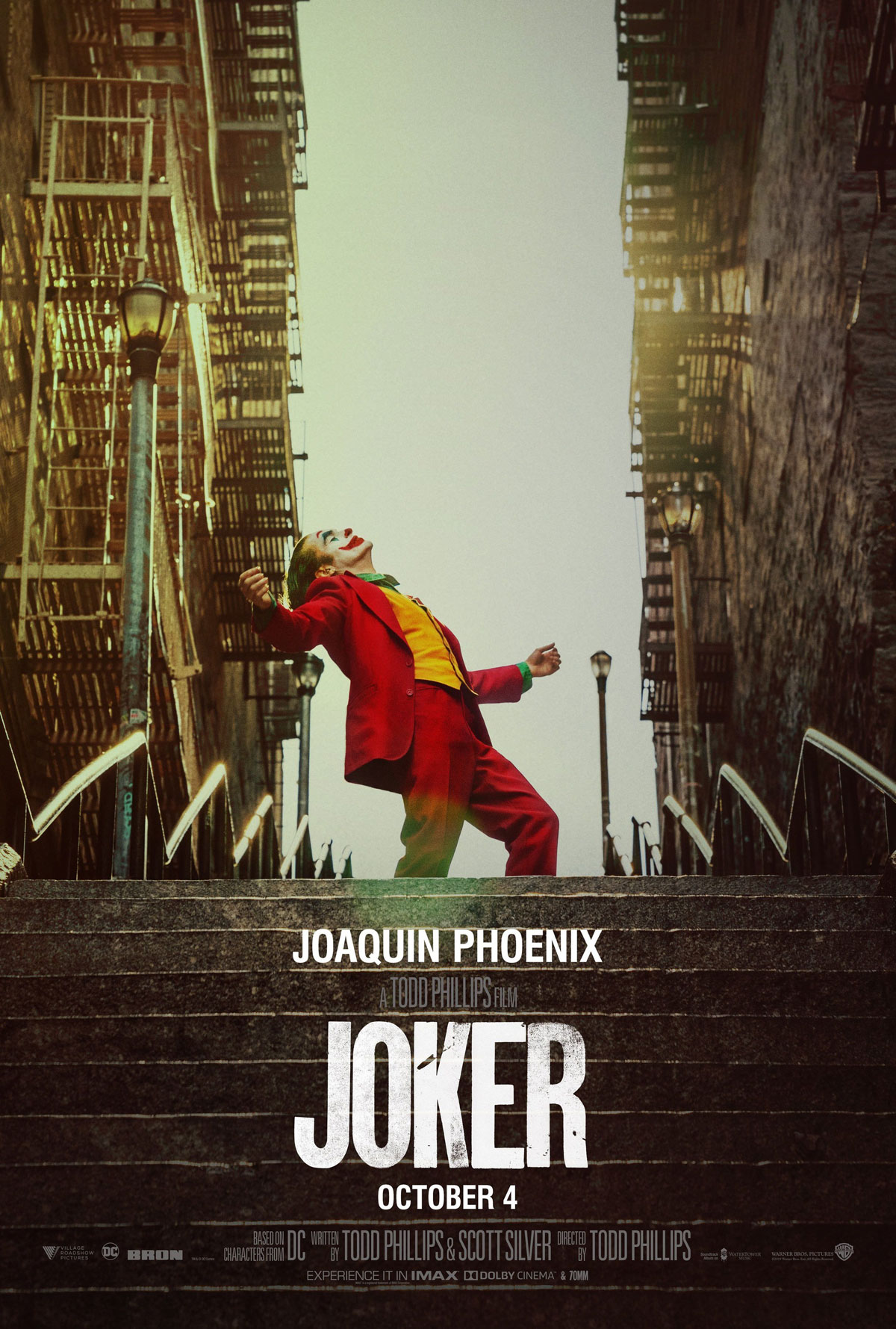 Look, man. I’ve seen Taxi Driver. I’ve seen King of Comedy. I’ve seen a bunch of films about sad, lonely loners in the big city whose mental stability is clearly in question. Those first two were both directed by Scorsese and starred Robert De Niro, of course, but if you squint not real hard you can see that Joker is certainly an inbred offspring of those two films. It goes as far as to actually cast De Niro in a role in the film. Which feels pretty ballsy all things considered. He’s not playing the Rupert Pupkin or Travis Bickle part this time, though. That one goes to Joaquin Phoenix as Arthur Flek, the stand-in for the troubled, stunted white guy who’s been bullied by society.

I know this is like sacrilege, but Phoenix is a better actor than De Niro. Or, he’s a more specific actor. He plays damaged well. He has a vulnerability, an injury that feels authentic. His acting style is a constant form of groveling. He’s not going to play the president or a senator. De Niro has a machismo, a lack of lunacy that plays more like Henry Rollins than Brian Wilson. Awkward analogies aside, Phoenix made for the perfect cipher for this brain damaged, regressive character who, through some Being There type coincidences and Mr. Robot-like societal decay, accidentally becomes the symbol for the forgotten, little guy fighting back against the man.

Speaking of “the man,” there is no Batman in this Joker movie. Nope, it’s a pure origin story. I suppose he’s very peripherally involved, but only in the sense that Bruce Wayne and his family represent the aforementioned “man.” Instead this is a very insular tale of a party clown and part-time sign spinner, aspiring stand-up comic and mental patient turned flawed icon. I can understand, after watching it, where people might have an issue with the portrayal. Angry, disenfranchised white guy frustrated by women and society turned vigilante becomes the unintended leader of a movement of other disenfranchised white guys. Sounds a little incel-y. So, depending on your perspective, this is either a cautionary tale about how these things rise. Or it’s a weirdly triumphant one where this weird, little man can grow to lead some sort of revolution.

Also, mental illness. In past portrayals, the Joker was always kind of crazy. But he was a maniacal bad guy. An unambiguous evil dude who reveled in anarchy and crime. This Joker, however, is merely a person with mental problems most likely brought on by abuse as a child. So what is Todd Phillips saying about victims of abuse? About people with mental problems? That they will inevitably escalate violence? That bullying and society will drive them from violence ostensibly in self defense to pro-active murder? Again, I don’t think this is outside of the norm in terms of movie tropes, but in this day and age I imagine there is generally more consideration before putting messages like that out into the public.

It is interesting that the the writer/director of movies like Old School and The Hangover decided to take on such a dark film. His last film, War Dogs, was a little less goofy than those others, but certainly felt of a piece with his oeuvre. So maybe this is his new thing. But is it really his thing? Because, as I mentioned above, it seemed to borrow way too much from existing popular art. If I were Scorsese, or even Sam Esmail, I might have a chat with Phillips to understand his motivation and see if he might have had my stuff on repeat in the background when writing this script. The material feels just a little too borrowed to be coincidence. Then I might even send the script over to the folks who made The Assassination of Richard Nixon to see if they recognize anything familiar. It’s not to say that Phoenix’s performance isn’t impressive — including the bizarro weight loss he clearly put himself through — and that the film isn’t entertaining in places, but to call it a truly original idea is us being disingenuous in our interpretation of art. It looked decent and Phoenix definitely chews up scenery, but the escalation of violence and transformation of the Arthur/Joker character felt a little unearned when looking back at it.