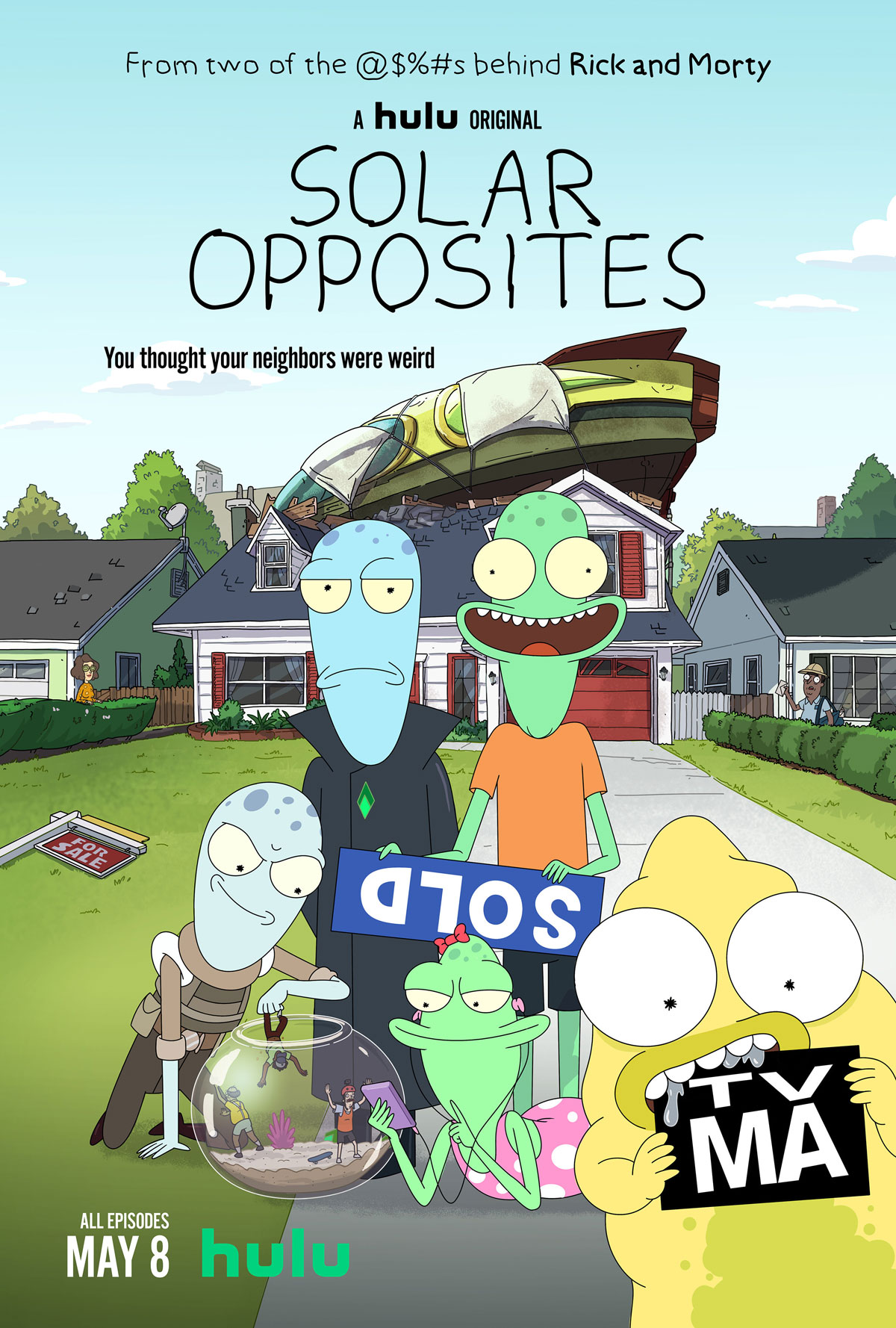 Look, I’ve never done cocaine. I know, I know. Lame! But from what little I do know about the drug (mostly from crime films and Harry Ellis in Die Hard), it seems to me that this show is the animated embodiment of that drug. In fact, there is a scene in which the younger animated aliens literally spoon coke into their faces from a giant baggy. Such is the aggressively aggressive nature of  the narrative, which seems more interested in saying “fuck” than being funny.

As nihilistic and kind of mean-spirited as Rick and Morty is, the creators of that series have somehow upped the ante with Solar Opposites. Whereas Rick and Morty is at least clever and the plots sometimes intricate, this one just goes for profanity-laced nonsense and total disregard for any kind of learning experience in all instances. Odd for a sitcom. And, honestly, even when there are despicable characters on shows, the writers redeem them in some way if not in every episode, at least every once in a while. Peter Griffin from Family Guy, for instance, is an idiot and a fool and does and says all sorts of unforgivable shit. But we know that he loves his wife and on occasion even shows some growth. Not so much with this family of seemingly horrible aliens.

And I suppose I shouldn’t apply human characteristics on four animated aliens. And, honestly, it shouldn’t matter that one of them just shrinks down any humans who piss him off and keeps them in what amounts to an aquarium in his room. And that they all just seem actively shitty to each other and everyone else. Morals and all I suppose need not apply. But this gives the writers the freedom to just kind of keep all of these episodes open-ended. To just take act three and stick a bunch of cusses in and call it a day.

And maybe I’m finding it so off-putting because the show just isn’t funny. I’m not certain if it’s supposed to be, but I think that’s the goal. Instead it’s just raunchy. The punchlines are either scatalogical, or just a string of shits and fucks. It’s like they watched the last season of Veep and decided that was the direction to go. It was not. Because constant insults, strings of profanity, weird sex stuff and general awfulness isn’t funny. At least to me.

Especially when it’s being delivered by cartoon characters who just feel like rehashes from other shows. The straight-man paternal figure who is just there to carry through on their mission and hate on the Earth on which they’ve crash landed. His dimwitted sidekick guy who digs the Earth because the people on it are dumb, lazy and driven by consumerism like he is. And the kind of weird children characters, one of whom is essentially the type to put a dog’s head on a stake and the other who just wants her classmates to be cool with her. It’s literally a straight rip of Third Rock from the Sun, but shown through an R-rated, funhouse mirror.

The other strange thing is the kind of show within the show. The aforementioned child alien who puts shrunken humans in his aquarium wall, has, in effect, created a Snowpiercer or Escape from New York-type world within the wall. We occasionally zoom into that world as the humans create hierarchies and governments and whatnot. An entire episode of the eight-episode season takes place inside the wall. While we watch the alien children talking to each other in their room. It’s weirdly mesmerizing, honestly, and just so damn weird. And violent. All I’ll say is rat milk. So gross.

I’m just a little unclear why we need this and Rick and Morty in the same universe. There is certainly some crossover, as the lead alien uses technology to do time-bending stuff and has all sorts of ray guns and stuff that do Rick-like things. It would be like Parks and Rec and Brooklyn Nine-Nine running at the same time. Two shows that are essentially the same-ish show made by the same person. And, yes, I know there was some overlap there, but I staggered my watching and would have probably been annoyed watching them live and seeing some of the same jokes across both. This show just didn’t seem necessary.

That all said, I will watch season two when it comes out. I’m hoping they have figured out what makes the show tick and maybe think about writing more comedic and less caustic content. And I know some love that hectic, chaotic, seemingly coke-fueled bang-bang stuff, but I don’t think it would take away from the feel of the show if they just took a breath every once in a while to let something land. Rather than just pursuing whatever it is they’re pursuing at breakneck speed, just plowing over and through their own creative work. And maybe one more likable human. And one less ass-eating scene.