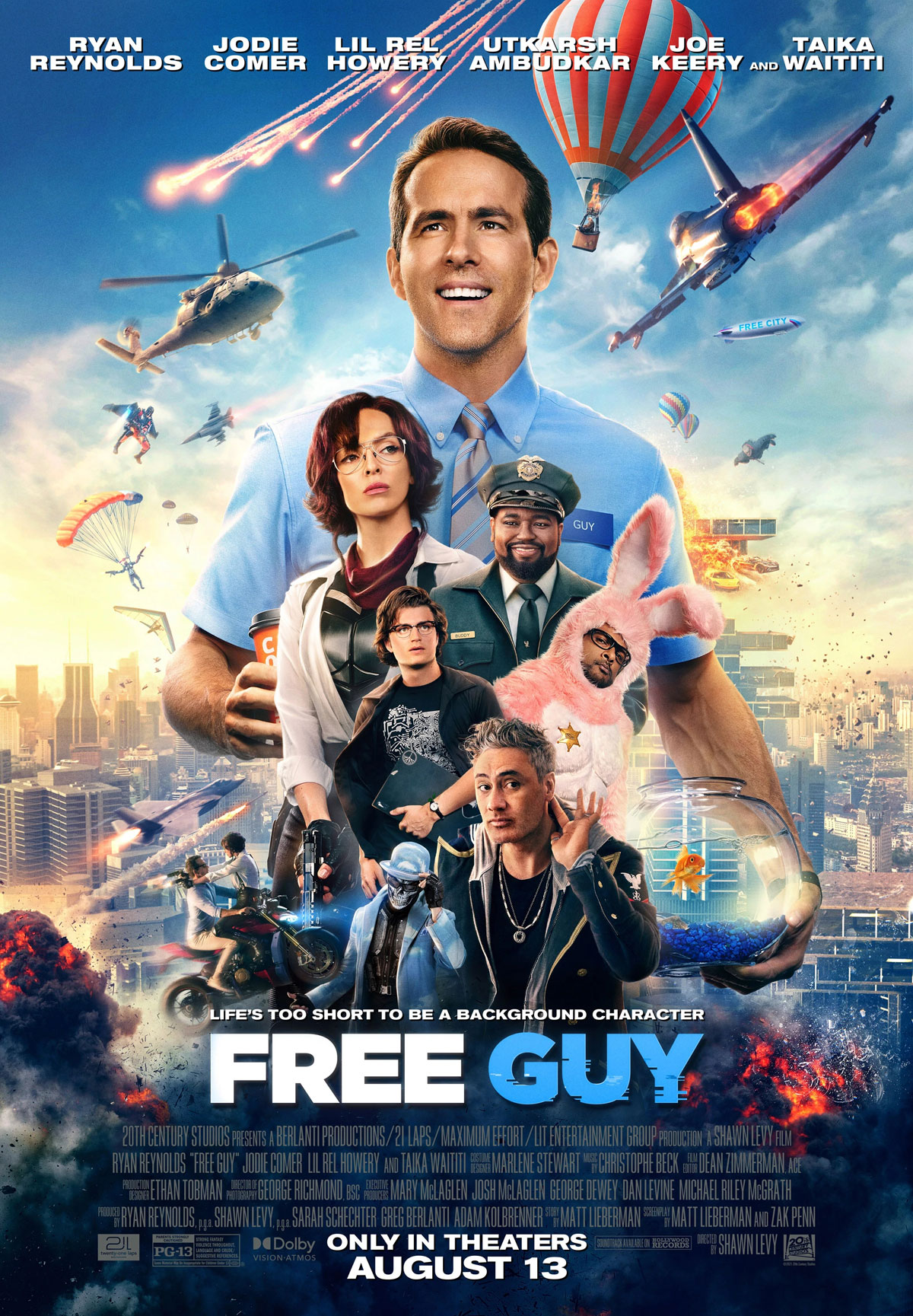 I’ll admit, I didn’t take my viewing of Free Guy seriously. I was in the mood to have something on in the background and didn’t care much what it was. I just knew it couldn’t be something to which I’d have to pay much attention. No mysteries. No talky-talky or auteur, fancy-pants films. So, something in the action-adventure comedy, mindless arena. Something that you’d expect The Rock to star in. But not. So who better than Deadpool himself, Ryan Reynolds? He’s become like the skinnier, way-more-Canadian version of Dwayne Johnson, I suppose. Quip. Punch. Get punched. Quip. Punch. It’s a formula that works pretty well.

That all said, I could have picked a movie that wasn’t quite so high concept. I mean, it’s not an overly complicated concept, but coming in with some very high-level knowledge of video games is probably helpful. After all, Reynolds’ character, Guy, is an NPC in a Grand Theft Auto-like video game called Free City. An NPC is a non-player-character, which is essentially just an AI-driven character programmed by the game’s developers to do certain things and react in a various number of ways to real-life players. They have no “free will.” Everything they do is in their programming. Guy is programmed to be this sunny, smiley dude who just goes through his day with his best friend and co-worker at the bank, Buddy (Lil Rel Howery), and just kind of gets the shit kicked out of him by the games’ actual players.

Now… this concept only goes so far before it sort of breaks and we just have to go with it. Because obviously Guy and Buddy have way more personality and whatnot than your typical automaton background video game program. I’m sure the hardcore gamers out there would eye-roll like mad. Especially given the fact Buddy is a security guard at a bank that never actually tries to guard the bank — which the real-life players are trying to rob. Not exactly a challenging challenge to rob a bank whose guard just drops his gun and lays on the floor every time. That’s some poor programming right there. But the two dudes’ relationship is very adorable, and the world is bright and cartoonish enough to keep it going.

The cracks start to show, however, when we zoom out to the real world. While Free City is basically Roger Rabbit’s Toontown, the real world is a really, really lame, comedic version of The Social Network. I’m sure there’s a better comparison, but the movie’s tension is built around an intellectual property fight. Which I guess makes the bad guy video game mogul, Antwan (Taika Waititi), the Mark Zuckerberg in this story. And the two visionaries, Millie (Jodie Comer) and Keys (Joe Keery), trying to prove Antwan stole and then bastardized their vision are the Winklevoss twins? I don’t know. Anyhow, this whole IP fight also becomes a story about social viralism, commercialism and a pretty unrealistic idea that people really want to see altruism and heroics in their video game personas. This all becomes evident when Buddy (branded “Blue Shirt Guy” by the public) becomes sentient in the game and starts essentially doing good deeds (in the game) rather than just being a passive NPC. The fact this would make global news, or in any way be cheered on, is kind of a silly concept. But, whatever. It happens.

And, again, all of this is fine for the most part. But the Antwan character, and Waititi’s portrayal, are all very confusing. He’s this loud, brash bro-douche who is just after profits on his game. It’s unclear how he came to own the game — or steal the game — from our two protagonists. It’s unclear if he’s smart. It’s unclear if Waititi was given any direction how to play this character. All of these things lead to lots of overacting, some terrible dialogue and just an overall mess of a character and a breakdown of what the writers were clearly going for. On the flip side, Comer, and especially Keery, are great. There’s a pretty obvious thing going on between the two of them that I would hardly spoil if I were to type it here, but it — and not this IP nonsense with Antwan — should have been the focus. And I know we always need the cad or the heavy or whatever in these films, but that Antwan “big boss” energy is pretty terrible.

That all said, the movie is fun and breezy and if you ignore the unreality of some of it, and even some of the preachiness at times, it’s a fun ride. Reynolds is almost always terrific in these types of roles. He plays dumb and innocent very well, and his comic timing is terrific. He can pull off the physical stuff as well. He’s not 5’6″ Tom Cruise kicking the shit out of people, after all. Lil Rel Howery is funny as hell. That dude has serious twitchy Kevin Hart energy, but puts out these amazing positive vibes and the camera just loves the dude’s face. He pops. Jodie Comer has clearly been typecast as a kick-ass physical actress during her Killing Eve run. She kind of keeps that tough-guy thing going for the majority of the movie, but her switch to a more relatable human stance at least shows us her range. Now, Keery. Despite his incredible head of hair, he has really kind of cemented himself as a really decent everyman comedic romantic lead type. He’s not primetime Tom Hanks, as he doesn’t have that spazzy edge or the darkness that Hanks can do. And he’s not Ashton Kutcher, because he has a much more sober, nerdy thing about him (despite also being classically handsome). I suppose he’s somewhere in between. And while this movie isn’t going to win him awards or anything, I think it will definitely be a decent calling card for future romcoms and whatnot beyond Stranger Things. The dude just has something.

Anyhow, the movie is what I needed. Relatively mindless entertainment with some nice looking CGI, some explosions and a brisk, comedic pace. The performances — with one large exception — are decent and the message of originality over franchise profits is good one. Albeit they step on that message in a big way with a surprise little scene that I won’t spoil. Until, of course, Free Guy 2 inevitably undermines it completely.