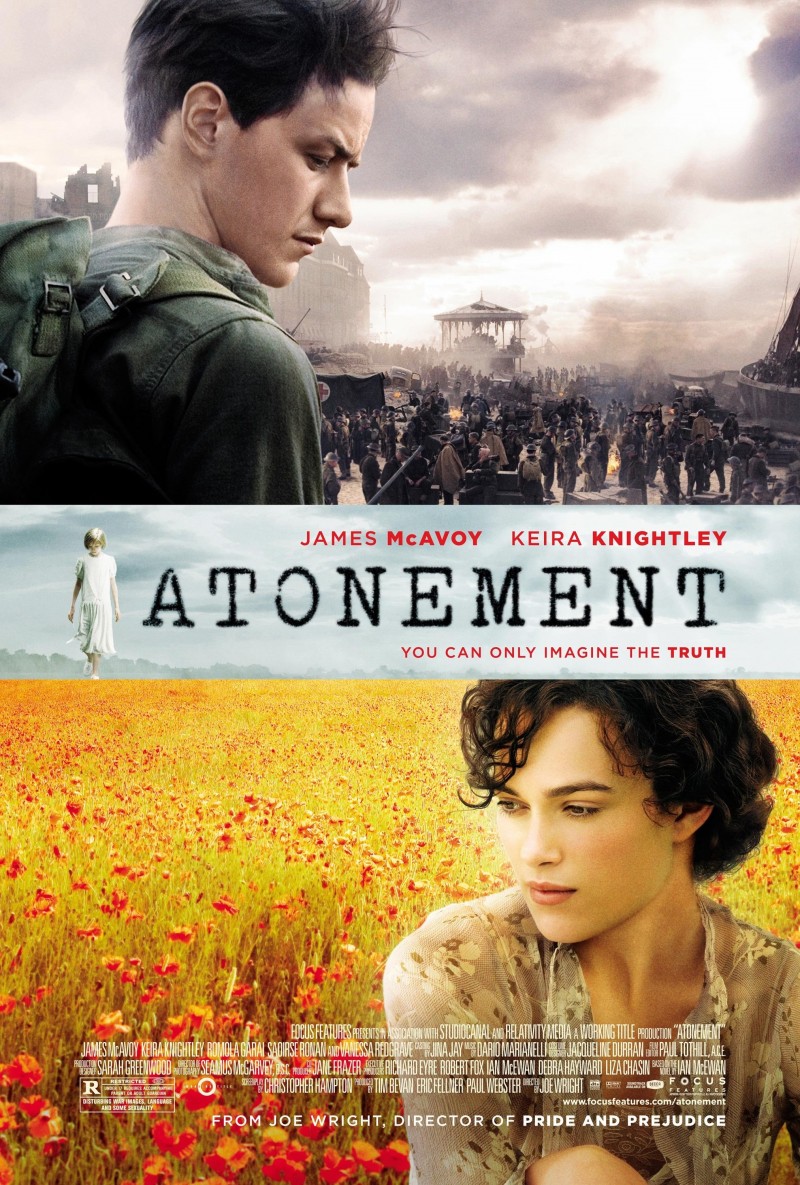 I read this book a bunch of years ago, and seem to recall a real Wuthering Heights thing going on. Of course I’m like the nine-millionth person to make that comparison (proving how completely unoriginal my thinking is), but what’s true is true. Of course Ian McEwan is a really good writer, and I think a certain literary aspect of his writing certainly came through in the film. It didn’t, however, have that weird British standoffishness of a Merchant Ivory film, but perhaps it’s because the characters weren’t in bodices and feathered hats, but rather the clothing of the late thirties. Oh, and at one point we can see a character’s pubic patch through her wet dress. I don’t remember that happening in A Room with a View.

This is a slightly more modern tale, as Britain teeters on the edge of World War II and the impending chaos that is the London bombings and the battles in France. Winona 2.0, Keira Knightly, plays Cecilia, a girl of privilege living out in her giant manor house somewhere in the English countryside. James McAvoy (who I thought stole the show in The Last King of Scotland) plays Robbie, the son of Keira Knightley’s family’s head housekeeper. The two have grown up together in this house, gone to school together, but obviously only one of them really belongs to this society, and the other was merely a boarder. That aside, they grew up friends, but Cecilia apparently dumped the close friendship when she went away to college in order to mix with her own kind. Also in the picture is Cecilia’s little sister, Briony. More about her later. It turns out that Robbie is and has been in love with Cecilia his entire life, and it seems he is reasonably sure that under all of her resistance to the fact that she too loves him. It turns out that there is a bit of a love triangle there–one that nobody is aware of–but the third wheel in the parallelogram, Briony, the sister.

The action in the beginning of the film revolves around the return of the family’s oldest son to the homestead for the holidays. It turns out that everyone loves the guy. He really seemed to play a larger roll in the book, but no matter. He brings home with him the son of a chocolate magnate. The guy is a scumbag. You can tell by his mustache. Anyhow, things go a little haywire, the young sister thinks Robbie is a sex fiend (but does she really?) and ends up accusing him of something that lands him in jail for a long time.

Flash forward and Robbie has been conscripted into the army. Everyone’s life has changed. The couple who seemed destined to be together have been torn apart by war, and a lie perpetrated by a jealous child.

The movie goes on showing the lives they lead during the war, always trying to work their way back to each other. Cecilia has disowned her family and has volunteered as a nurse, while her man fights the Germans. Meanwhile the little sister is also trying to make up for her life-altering decision, also leaving her cushy life to volunteer as a nurse. Despite her best efforts to repent, she is shut out by both, who are still bitter and angry over her betrayal.

The movie bogs down for a bit as we experience Robbie’s time stuck in France, as well as some oddly paced and sequenced scenes that are either in flashback, or current, or somewhere in between. Honestly, the thing kind of falls apart a bit as the director tries to piece together scenes that we eventually learn are mostly fiction anyway. Oddly enough, though, it somehow works almost better in movie form than it did in the book. I guess this is a bit of spoiler, so stop reading now if you care, but the ending is not completely dissimilar from The Usual Suspects in that the narrator of the film is also a character in the film, and is controlling the entire plot. So we have to rely on her to give us the straight dope on what is actually happening. If she decides to change facts, we have no choice but to believe her take on the events. Anyway, the twist in the end is not completely surprising based on some build up at the beginning of the film (when you think about it afterwards), but in the book, it actually comes kind of out of left field. Anyhow, the acting is good, the movie looks really nice, but it could have been done better with some editing and perhaps another pass or two on the screenplay to tighten it up in parts.