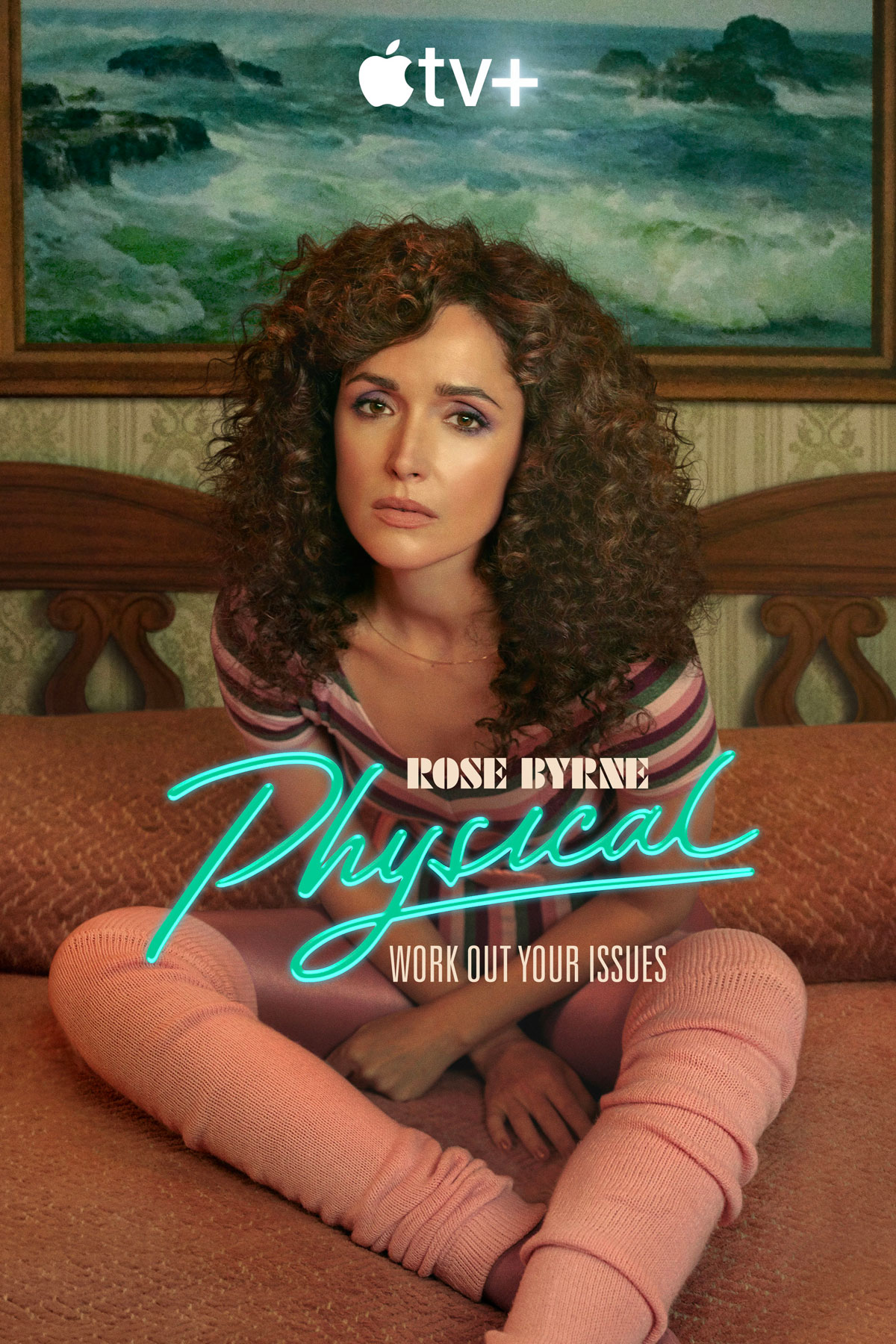 Sometimes there are shows that seemingly have no clear audience. Was anyone out there clamoring for a pretty dark show about an anorexic/bulimic woman who almost accidentally drove the rise of aerobics in the 1980s? A show where star, Rose Byrne, constantly calls herself a piece of shit and worse in frantic voiceover? An internal dialogue that is punishing and horribly depressing for a network like Apple TV+, which has up until this point not gone that bleak. Despite its lead show, The Morning Show, essentially being about a rapey dude who loses his job. I suppose. But Physical goes there. It’s ostensibly a comedy-drama or a dark comedy, but when you really think about what happens in this show, it feels amazingly hopeless at times.

I do wish they’d let Rose Byrne use her natural Australian accent more. That’s just something I’d like for her. But it wasn’t appropriate for this role, as her character, Sheila, is particularly American. As is the story. In it she plays your typical suburban 1980s mom. Living in the San Diego area, she has seemingly given up on any of her younger aspirations to be a mother and wife. Her husband, Danny Rubin (Rory Scovel), once a dynamic political activist and charismatic radical-type, has settled into this lifestyle and has lost any of that fire that once attracted Shelia to him. They’ve become complacent and fat and lazy compared to their younger selves. The pressure of keeping up this life, while at the same time being wildly underwhelmed by what they’ve become, drives Sheila’s horrible cycle of control. Manifesting itself in denying herself any type of sustenance. Or joy. Until, of course, she boils over and binges and purges in really, really unhealthy ways.

Early on Danny loses his college professor job — because we’re led to believe he’s either too difficult, or just kind of an idiot — and at Shiela’s urging decides that he’s going to run for office. State assembly, whatever that is. But he’s going to get the Berkley radical gang back together for his campaign, so to speak. Meanwhile, we go on a journey with Sheila as she surreptitiously takes ballet lessons to keep herself thin, discovers this amazing underground aerobics thing in a mall and does some absolutely disgusting things with a sack of burgers. All the while we get to hear her judge everyone around her, while saving the worst, most vicious attacks for herself. It’s unclear if her internal thoughts about Danny — most of which are incredibly disparaging — are just a manifestation of her negativity toward everything, or just her overarching dissatisfaction with where she and he have ended up in life. Though, honestly, their house is pretty dope and San Diego looks pretty damned nice. So I’m not totally clear what the issue is. Well, except for the fact that she’s secretly drained their bank account because of her, uh, issues. Stupid burgers.

Let’s get this out of the way first. Byrne is amazing. She is really, really great as Sheila. She is high-strung and sad and frantic and really embodies the role. Her physicality is an important piece of this as well, and just the way she goes for it in every scene is terrific. By that measure, the rest of the cast has no chance. They’re all good as well (especially Dierdre Friel as fellow mother and issue-having woman), but this is Byrne’s show to drive. And despite being a sometimes repugnant character, she is hard to look away from. Even with the insane curly hair and those disturbing leotard things they wore in the 80s.

The story itself is a little uneven depending on which of the A, B or C plots you’re focusing on. The A plot, which is Sheila’s awakening of sorts, is the most compelling. To watch her tenuously move from an always-apologizing, self-destructive second-fiddle to a mildly more self-confident, take-control-of-her-life business woman is pretty fascinating. The writers and Byrne herself do well to not make that a sudden transition, either. Too many times in shows, there’s some catalyst or inciting event where the bookworm turns into the butterfly, or good girl to badass from one scene to the next. Shedding all signs of their former self. But this is a super-gradual and subtle move, which still feels super-shaky even after we think she’s almost-sort-of arrived. The B plot with Danny’s campaign is interesting, and then not. It’s super-repetitive and underdeveloped. His character is a bit of a whiner and is somehow less sympathetic than some others, even if his motivations are probably the most altruistic of anybody’s. We’re set up in the beginning to dislike the guy, but I’m not certain that was intentional. And then it never wears off and he always comes off as a schnook no matter what he’s doing or saying. Perhaps it’s the dumb hair and glasses. Perhaps not.

There’s a C and D plot with the couple who originally turned Sheila on to aerobics and are ostensibly her partners in the burgeoning business, which acts as a bit of the comic-ish relief. But those characters feel like bolt-ons to the main A plot. It’s not that they’re not fine, but they can’t seem to script their trials and travails in the same path as Shelia’s, so it feels a bit apart. And then there’s yet another plot line (which finally converges disturbingly in the last scene of season one) with this Mormon land developer, John Breem (Paul Sparks), who is the foil to both Danny’s campaign and Sheila’s aerobics business at the mall, which he owns. I think. It’s a very weird storyline and not completely clear what’s up until that last scene. And is hurting my brain as I type this.

And still… I’m not sure who this show is for. I suppose women around my age might find the whole industrialization of exercise from their childhood to be interesting? Or, more so, the burgeoning self realization and journey of a woman in a man’s world. Reagan’s America, so to speak. But of that audience, I imagine only a few would want to take on the triggering events of this series after such a shitty couple of years in the real world. I would imagine. It’s much easier — especially during a global pandemic — to watch something more fantastical. Something less “real.” Because despite this being posed as a comedy, there’s not a whole lot funny about it. It feels desperate, even in its lightest moments. The humor is mostly ironic in nature. Or thrown on the shoulders of the stoner surfer character, Tyler (Lou Taylor Pucci), because everyone loves Spicoli types. Even though his character is probably the third-saddest character in the show. Mostly all of the characters are struggling. With money. With identity. With professional and personal pursuits. And most of this manifests itself in self-destructive behavior, which is sooo hard to watch on screen.

I understand Apple has renewed this series for a second season. They did leave it on a bit of a [creepy] cliffhanger, but I’m also not sure if I care enough about that hanger to tune back in. It’s a lot. I think just Byrne alone is enough of a reason to tune in, but just. It’s a tough hang, and a pretty depressing one at that. I’m not trying to bury my head in the sand, but I don’t always need to be reminded that most people are fucked up. Whether it’s an eating disorder, a weird kink, depression/suicidal ideation, drug addiction, self-harm and on and on, this series has it all. It’s not done in a way that feels like a gritty docuseries or anything, but it’s all still there. And we get to watch it unfold in horrifying slow motion. And maybe I’m just sensitive to the frailties of human nature after being locked away from them for a couple years, but I’m also not sure I want to be reminded constantly in my entertainments.