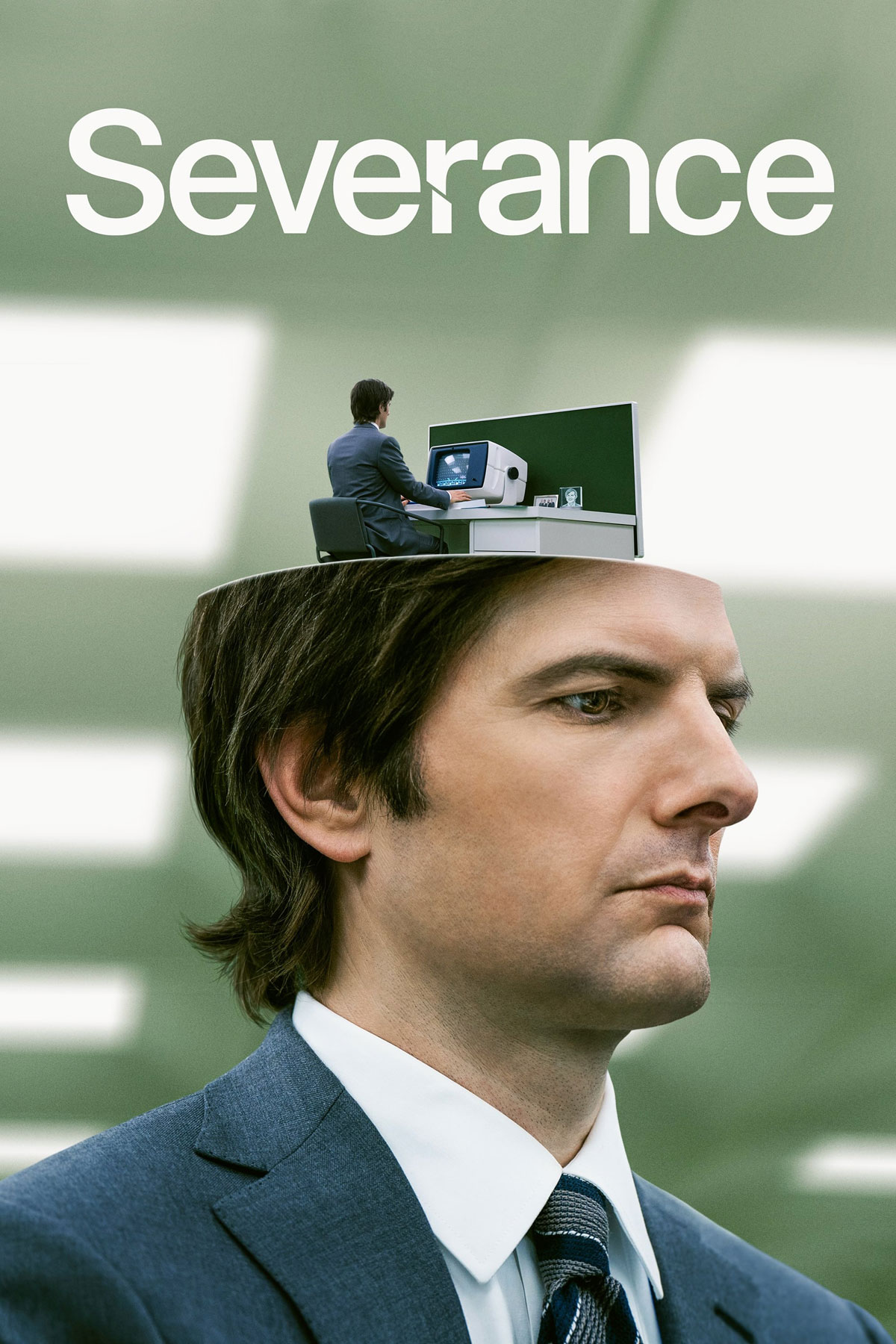 Shoot Severance directly into my veins. I’ve found my genre. I’ve found my type of show. Stylish. Mysterious. Smart. Weird and low-key funny. It’s not so much to ask, is it? I knew from moment one when I saw the oddball retro futurism of Lumon Industries that I was in. I’m a sucker for these vaguely sci-fi, psychological mystery box shows. But where high-profile shows like Devs — and even Westworld — really hit on the stylish and the mysterious, and even the smart, they are missing that special sauce. That sly undergirding of humor. Not like ha-ha sitcom humor, but ironic humor, or just characters that aren’t all wrapped up in the horror of their present situation. Because in life not everything is emo. We laugh to keep from crying. Anger can come out in funny ways. Things can be situationally hysterical when viewed through the right lens. After all, this is a Ben Stiller show. And while he has obviously become a masterful filmmaker and can bring the emotion, he also gets that uneasy laughter can help make narratives and characters richer.

Look, I’m not saying Severance is a comedy in any way. It’s not meant to be. But, like life, there are moments — even moments in the midst of horror — that reactions can be construed as comical or bizarre in a funny way. In any case, let’s set Severance squarely in that psychological sci-fi realm, but with a tinge of workplace dramedy mixed in. But that drama, and even the humor, comes about because of the conceit of the show. It’s a pretty simple one, but one that feels wholly original and thoughtful. What if you could literally sever your brain so that you had one consciousness at home and another at work? Meaning that the moment you leave work, you take absolutely none of it home with you. No worries. No stress. But also no clue what you do all day. And at work — as soon as you descend in that elevator — you have absolutely no knowledge about what’s happening in the outside world. Not only what is going on in the news or the planet as a whole, but no memories of your current or past life. Do you have a wife? Children? Is life good or bad? Am I a psychotic murderer when I’m not at work? No idea.

The advantage, of course, is the aforementioned ability to leave work at work. You can give your 100% attention to whomever you have at home. No emails. No calls. No lingering doubt about your job or anything. And when at work, you get to forget about whatever is going on at home and focus on your important work. No distractions. No responsibilities or interruptions. This, of course, means that each person is pretty much only half a human. Especially when at the office. Our little quad of workers are almost childish in their interactions. Working hard for prizes that you could win with 15 skee-ball tickets. Sitting all day at these computers moving floaty numbers on a screen into little digital chests. They are infantilized in a way because of the tabula rasa nature of their severance. No idea of who or what their “outie” is. No clue what the world is about. No idea what makes for a good reward and what is literally a toy meant for a small child. It’s absurd. But also kinda deep.

In this little pod — sitting in the middle of a giant, empty room huddled around four computers —  are Mark (Adam Scott), Dylan (Zach Cherry), Irving (John Turturro) and Helly (Britt Lower). They have all, for different and mysterious reasons, signed up to be severed. They do this weird number moving job, having no idea what exactly the point is. In this odd room in an underground maze of hallways and seemingly locked and/or empty rooms. Sequestered from whomever else works in the building and the other severed workers who presumably work on their severed floor. Yet the giant floor seems pretty empty. Mark is the new head of the department after the old head — and his closest work friend — goes missing. He’s the protagonist of the show as well. As we get to follow him home. What didn’t dawn on me until the characters started really bringing it into perspective is that each person’s “innie” and “outie” are two different people. And that the innies think of their outties as a separate entity from themselves. And as their mysterious and seemingly less-than-ideal situation in the Lumin basement starts to go south, they must rely on their outie (who, again, they view as almost a separate person) to save them. Because as soon as they’re deposited in the office by their outie (thus becoming the innie), they are trapped and have no way to escape as themselves. Because as soon as they rise in the elevator to the surface, their consciousness changes to the other. The outie. It’s mind-bending.

I’m not sure how exactly to talk about the show without spoiling anything. It’s best to go in cold and just enjoy it. But there is obviously — or maybe not so obviously — something shady going on at this Lumin company. The actual “work” we see people doing in that severed floor is both bizarre and seemingly useless. But the people doing the work have no idea that’s the case. It’s akin to the hatch in Lost. Just keeping typing in the numbers, despite the fact you have no clue if it’s doing anything. Hey, at least they’re getting paid. There is all sorts of stuff that is just so strange and delightful. It all feels original and creative and actually a deep rumination on office work and how we can be two different people in our work and our personal lives. Each of our office workers is so well drawn. Of course, we have no idea if this is who or how they actually are in their “real” lives. In fact, they have no idea if this is how they are in their real lives. They don’t know those people. Even though those people are them. The show creators don’t rush things, and I really appreciate that. They give us time and space to get to know these people. Enough so to make us wonder what the hell happened in their outie lives to make them make this decision. We get a sense — because we get to see outie Mark interact with this sister and brother in law outside the office — why he decided to sever. But the others remain a mystery until the season finale. And let me tell you, it’s one of the best season finales I’ve ever seen. It’s phenomenal. Point is, it’s a slow burn to some extent, but the pacing and monotony and grey Upstate New York environs are worth it because we grow to care about these weirdos. Enough to root for them against the mysterious Lumen, their creepy boss, Miss Cobel (Patricia Arquette), and the really, really awesome security dude, Milchick (Tramell Tillman). And it just looks amazing. Everything has that mid-century retro Scandinavian vibe, which is just visually so cool.

I know TV is really into the mystery box these days. And I know some people are sick of it. I’m not sick of it. It tests the brain and makes for fun conversation afterwards. That, I think, is the point of television, no? Whatever the case, this is a masterful bit of television. From character development, to writing, to visual style and amazing direction. It’s just immaculate. So lovingly created and executed. There were a few weeks where Ms. Hipster wasn’t available to watch the night it came out and it took everything I had not to sneak-watch it. I looked forward to it so much each Thursday. I’m very confident that Stiller and his peeps know where this thing is going. It feels planned out and tight. I’m really hoping they get to see their vision out. As the finale got closer and closer to the end of its running time I became more and more anxious that we weren’t going to make it and that they’d leave us on an utter and complete cliffhanger. Turns out they gave us just enough that we felt exhilarated, but not pissed that they cut it off right before we had to go into Severance hibernation for the next however long before we get season two. I’ve even thought of getting severed myself so that my other self could enjoy Severance and Adam Scott’s giant head for the first time all over again. Also, it’s so nice to see John Turturro being awesome again. Especially because scenes with him and Christopher Walken are some of the things I’ve seen in years. Huzzah.