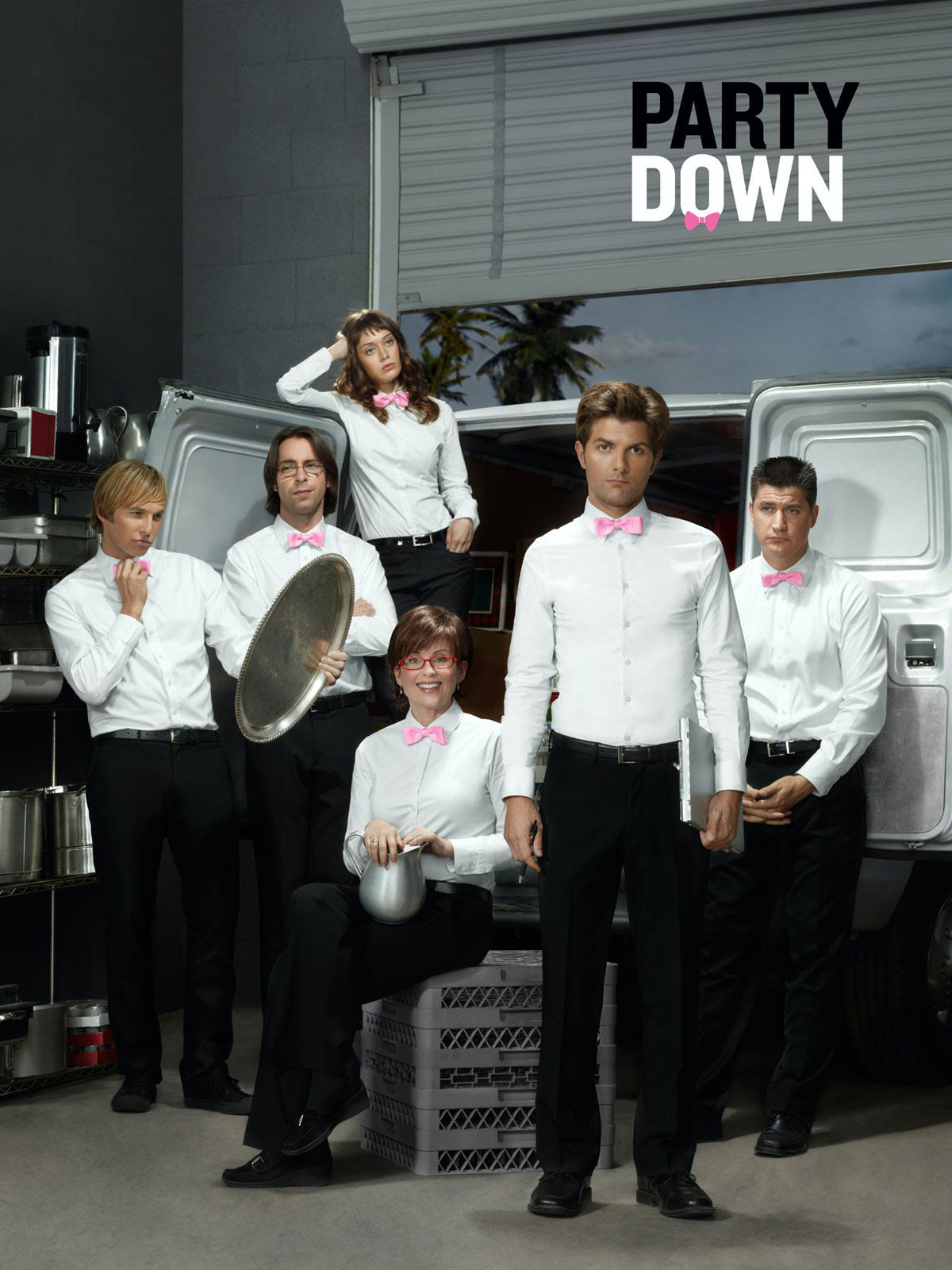 The pitch for Party Down must have been super-simple. It is the most quintessential workplace sitcom one could possibly imagine. It makes The Office seem like a mystery box show. You see, there’s this catering company in LA. And each week they cater a new and different party in and around Los Angeles. The entirety of the episode takes place at that party from setup to clean up. That’s it. Literally, that’s the pitch. I mean, it just doesn’t get any simpler, or more self-contained than that.

What this does for the audience — and presumably for the producers at STARZ who aren’t working with a big budget — is put the whole cast and all the surrounding actors and actresses in one location for each episode. There are almost no secondary locations ever. They don’t, for instance, show Henry Pollard (Adam Scott) getting ready in the morning, or dealing with his landlord or getting a coffee at Starbucks. Any talk of a life outside of the party at which the episode is set is done through dialogue. It’s a pretty neat trick, and one that makes the show incredibly digestible and easy to follow and hang with.

The fact that the show is from 2009 / 2010 also helps focus it. If it were a “modern” series, there would be all sorts of need to involve social media and phone apps and whatnot. And, sure, there is some cell phone usage, but the show still feels very analog in the best sense. Mostly because the parties still feel like how parties used to be. People aren’t staring at their screens, or off in a corner texting or Instagramming or whatever. They’re interacting in awkward and unique ways, like humans are supposed to.

Our main character is the aforementioned Henry. He’s a washed-up commercial actor who became well known for a beer commercial in which he delivered the zinger line: “Are we having fun yet?” Now, coming back to his former catering/bartending job at catering company, Party Down, he is often recognized by guests and asked to say his iconic phrase for them. Scott plays the role in his usual droll manner, obviously pissed that he has to put on a pink bowtie, and is constantly asked why he, the beer line dude, is working a catering gig. And then, just as quickly, asked to perform like a trained monkey and say his catchphrase. He drinks too much and is generally kind of a pathetic, but knowingly pathetic, character. And, as usual, he’s terrific.

As with Henry, the others on the crew are all doing the job because they either can’t make ends meet as actors, comedians or writers. Casey Klein (Lizzy Caplan) is a struggling stand-up comedian who is obviously posed as Henry’s will-they-or-won’t-they. I’m not sure if Casey is actually supposed to be funny, but from the small sample we see, it’s pretty obvious why she’s struggling. Kyle Bradway (Ryan Hansen) is the stereotypical pretty-boy actor with a high ego quotient, not much between the ears, but charismatic enough to keep himself afloat in fourth rate, bit parts between catering gigs. Roman DeBeers (Martin Starr) is the overly educated writer who insists that he only writes “hard sci-fi” and looks down upon his fellow co-workers because he clearly feels he’s above it. He’s constantly eating the catering food, making snide remarks and generally being a dork about things. Ron Donald (Ken Marino) is the team captain of the crew, a former friend of Henry’s, a recovering alcoholic and an earnest dude who just wants to save enough to open his own Soup ‘R’ Crackers franchise. The first season, Jane Lynch is part of the crew, playing a former B-movie actress who seemingly did a lot of partying and nude scenes (sometimes on camera, sometimes off). In the second season, she’s replaced with Megan Mullally, who is just a somewhat dingy middle-aged woman in the midst of a divorce and looking for a distraction.

The reason for the cast breakdown above is because that is really all there is. If you like these actors, you’re going to love the show. A show that almost feels like a bunch of actor friends getting together and putting on a weekly extended skit. The one outlier is Lizzy Caplan, who almost feels like she’s outside the sphere of the rest of them. But it totally works. She’s this cute alien who they’ve dropped in this almost broey pit of desperation, who almost becomes acclimated over time, but still feels apart from the rest. But intentionally so. She’s like the guest star on SNL, I guess. She and her Nermal eyes bring a frantic energy to the proceedings that amps up the entire crew (besides Marino, who needs no amping up). Like they want to kind of hang and joke around and ad lib or whatever, but she’s there to always poke them with her spazziness. I do feel like the move from Lynch to Mullally was a little bit of a come down, but they bridged the cross-over with a couple episodes of Jennifer Coolidge, which is always a delight. And putting Scott in the middle as the Gen X, sarcastic straight man amongst these other weirdos is a perfect pairing. Especially when he struggles with his desire to be the actor he thinks he can be, only to constantly be reminded of his reality.

The only sucky part is that they only got two seasons out of this show. Like I said, the concept is so simple and so extendable that it could have gone on for years. They could have easily rotated in crew and continued to bring in ringers for an episode or two like Ken Jeong, Kristen Bell, J.K. Simmons, Ed Begley Jr. and on and on. But, dammit, they all had to go off and do other shows that presumably paid better. Party Down was co-created by Rob Thomas, who is apparently not the lead singer of Matchbox Twenty, but the dude behind Veronica Mars. A show I now understand that many of these actors appeared on. Paul Rudd also had a hand in the creation of this show, and apparently was slated to play the Henry role, but didn’t end up doing it for some reason. That would have been pretty incredible, too. Of course it seems that a good number of these actors (including Rudd) ended up on Parks and Rec at some juncture, either in leading or guest roles. And, come to think of it, The Good Place as well.

Anyhow, I found the series — short as it was — entirely enjoyable. The casting was immaculate, the acting fun and entertaining. And the concept just straight easy. And, look, I appreciate the crazy, intricate stuff. But I will give a large swath of room these days for a breezy sitcom that has all the elements this one does. It’s almost a perfect binging show if you’re looking for something that feels like old TV, but in the best possible way.