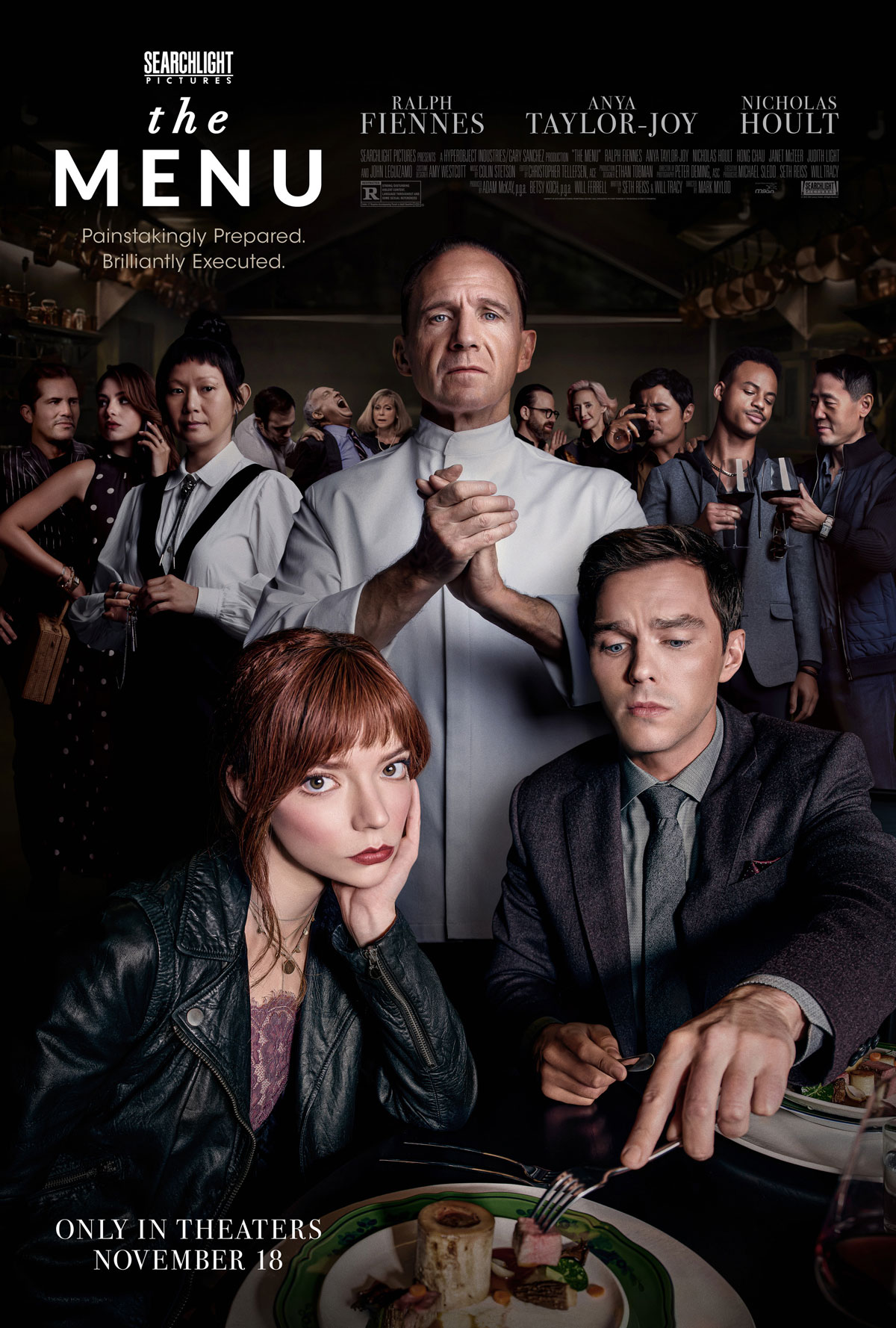 It seems my focus of late — if of late is like the past two decades — has turned from movies to television. There is a reason. First, television has become so much better than it used to be. Second, most movies include capes and tights. Third, the television medium is just better at telling a deeper, more detailed story because it can expand a world to eight or ten hours. So I’ve just kind of lost the narrative when it comes to storytelling in a nice, compact 90 – 120 minutes. But, luckily, there are still films like The Menu to remind me that films can still give me joy in great, bite-sized end-to-end narratives that are still satisfying. Just in a different way.

Sometimes we need a ton of character development. We want backstories and lots of emoting to get to the bottom of a person’s psyche. We need to understand motivation and all the Freudian and Oedipal reasons why a character would want to murder his mother or screw someone over on a business deal. It’s just what we’ve come to expect in the expanded universe of series and limited series and whatever other frameworks there are. Even psychologically devastating (De Niro) movies like Taxi Driver, King of Comedy and Raging Bull that focus solely on the unraveling of singular character managed to do this without getting into every single detail of their childhood and home life. There has to be an economy in the way you present things in films. There are any number of ways to say “this dude is this type of dude” or “this woman is this type of woman,” but with only an hour forty-five to tell us who these people are and why we should care, care has to be taken to make it so. It’s tricky.

This is a big wind-up all to say that The Menu does a terrific job of showing us who this small group of diners are who come to this island to eat a $1,200 meal with renowned Chef Slowik (Ralph Fiennes). Of course, with the limited time and the dark comedy/social commentary nature of the movie, they rely on some stereotypes that we can recognize quickly and easily. And not mind when these people end up in dire straights. Because everyone hates dickhead finance bros who think they’re important by dint of working for someone rich and important. And, hey, if they get fucked up… Anyhow, they do a good job of quickly introducing us to the different characters, giving us a sense of why they’re here, how they can afford an expensive meal like this and generally how they’re going to react to what befalls them. All the people, that is, save Margot (Anya Taylor-Joy). She is the date of the ultimate Slowik fanboy, Tyler (Nicholas Hoult). But, as it turns out, she’s a sub. Tyler’s original date — his girlfriend — broke up with him and didn’t make the trip. So Margot is a last-minute replacement. One that Slowik didn’t plan for. And, as we see, every meal is specifically constructed for the exact audience in attendance. And this switch has thrown the chef for a loop. The mystery of Margot has put whatever he had planned for this special night in peril. Because this isn’t going to be just any menu. Not tonight.

I can’t go too much into it so as to not spoil the plot, but suffice it to say that what is supposed to be an amazing night of food and experience turns real dark, violent and horrific. The film does a terrific job of showing the tension and pressure there is in the creation of new cuisine and the perfection and discipline expected out of the chefs. At heart of all of this is the creation of a monster like Slowik, as the “love” is gradually drained from his cooking. The striving for perfection and innovation robs the food of its soul, and with every service drives everyone involved to the edge. Because perfection is never achievable. Do they love some of the nonsensical food just because the chef is who he is and they’ll kvell over anything he puts on the plate? Like his number-one fan, Tyler? Or just show up all the time, like the older couple, because they have a ton of money and it’s just something to do? Or call bullshit on everything like Margot? Because she’s the only one there who recognizes the fraud Chef Slowik has become. A man who once cooked because he loved to cook, but is now a wholly-owned entity who is constantly asked to put out weirder and weirder stuff in order to be cutting edge just to be cutting edge and keep his reservations exclusive and revelatory.

There are a lot of issues at hand here, but the key battle comes down to Fiennes versus Taylor-Joy. And I’m always down for it. That said, Nicholas Hoult is really great. His character is pathetic in just the right way, and his tall-ass frame and watery eyes are just a really good compliment to his performance as the guy you kind of want to root for, but just can’t because you need him put out of his misery. Fiennes, with his indeterminant accent, is terrific as the pent-up chef. He has a commanding presence without having to yell and laugh maniacally and resort to your typical psychopath tropes. But Taylor-Joy, with her absolutely fascinating face, holds it all together. She presents an understated strength that sets her apart from a room full of rather sad, panicky folks. She uses her physicality and her otherness to command the space, which mostly takes place in a smallish dining room. She’s just a very dynamic performer, and she is truly the one person you can root for in this pack of doomed diners. Her secret is eventually unraveled and exposed, but she owns it in a way that is impressive.

There are definitely elements of things like Black Mirror, The Hunt and various other horror and social satire shows and films in The Menu. So it shouldn’t feel unfamiliar or new, really. But its visual storytelling, top performances and timely subject matter (cuisine!) made for a fun watch. I highly doubt it’s going to win awards of any kind, but it really is a solid piece of filmmaking and I enjoyed finally getting to see a movie that didn’t feel like it would have been better as an eight-episode season of television. It gave us just enough and not too much to make it a good end-to-end tale. And maybe that’s because it’s an all-in-one-day narrative, taking place almost in real time. Which, in our expanded storytelling universe, may be the best route for films to take if they want to keep dummies like me engaged.