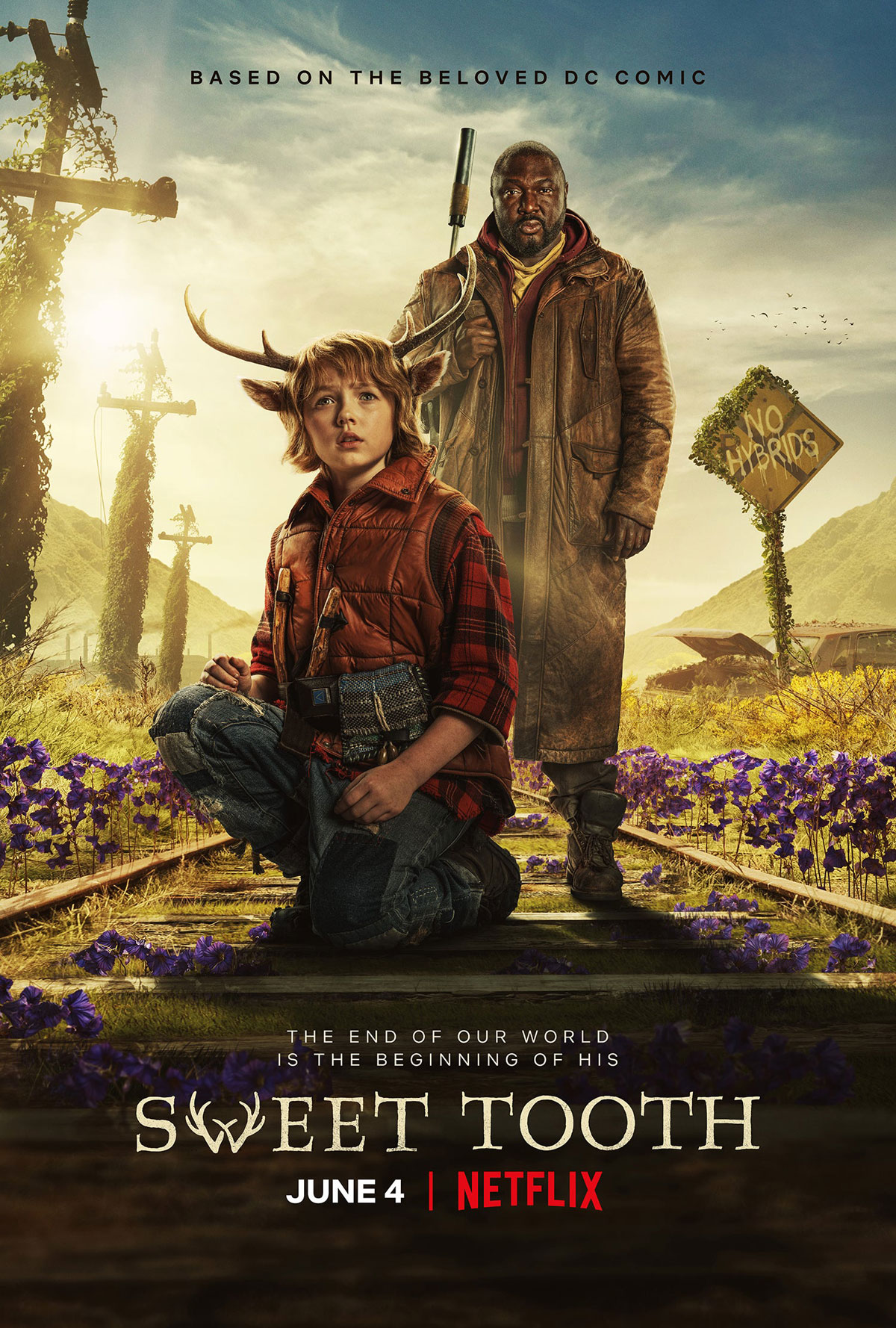 Shows about global pandemics are probably not the most popular genre right now. It just hits too close to home. I’m not certain when production started on Sweet Tooth, but I imagine the creators of this series had no idea what was to come when they began concepting the DC comic book for television. Otherwise they probably would have passed on a show that has several scenes of face-masked people combatting an airborne illness, “The Sick,” that has killed millions.

Of course this pandemic has an unforeseen side effect. Some children are born as animal-human hybrids. This phenomenon coincides with the start of The Sick, so it is generally assumed that these hybrids are somehow causing the plague. But, scientifically, that doesn’t make a whole lot of sense. It’s more likely an evolution, as these hybrids are immune to the virus and are more suited to a planet where being able to cope in the wild is more in demand. Because people think the hybrids are the cause of their woes, hybrids are shunned, hunted and generally reviled and/or killed. Part of the human justification for murdering what amounts to peoples’ children is that the hybrids are generally more animal than human when it comes to being able to talk, act human, etc.

Enter Gus/Sweet Tooth (Christian Convery). Seemingly one of the first hybrids born, he is whisked away by his father, Pubba (Will Forte), to live in the Yellowstone woods away from civilization. Pubba raises Gus alone, home-schooling him by creating classic books for him from memory and teaching him all the basics. But mostly warning him against ever talking to another human or venturing beyond the fence that encircles their encampment. But Gus, like any child, is curious about that which he is told is dangerous. And he wanders. And eventually the real world comes to them and Gus is left alone. Unlike his fellow hybrids, Gus is able to talk. And, save his antlers and deer-like sense of smell and hearing and his insatiable love of sugar, he is your typical ten year old. Granted, one who has never met another human other than Pubba and has no idea how the world works or what’s happening outside a couple acres.

A while into his total isolation a nomadic badass named Tommy Jepperd (Nonso Anozie) comes upon him. Shit goes down and now Jepperd and Sweet Tooth (a nickname Jepperd has given him due to his maple syrup chugging habit) are on an adventure to Colorado to track down the woman who Gus thinks is his mother. This is based on a photo of a woman that he found in his father’s belongings with the word Colorado written on it. Jepperd is, in typical fashion, a gruff loner who has no time for a ten-year-old tag-along, but their partnership soon becomes weirdly symbiotic in a way. The wide-eyed, fish-out-of-water Sweet Tooth and the violent, world-weary wanderer going out into the world. Jepperd constantly trying to lose Sweet Tooth. Sweet Tooth getting more and more attached to his ward. It’s one of those relationships we’ve seen a lot over the years where neither cares what the other is and doesn’t judge them for it, which eventually leads to a deep and abiding attachment.

The movie itself becomes a bit of a fantasy adventure. A road movie, really. As Jepperd and Sweet Tooth hike and train their way from Yellowstone to Colorado in search of this mystery woman who Gus thinks is his mother. Along the way we get an understanding of the state of the world. Which is mostly a disaster. There’s a national militia of some sort called the Last Men out there that keeps the peace, mostly by roughing people up, murdering and rounding up hybrids. Our two travelers are constantly trying to avoid them, although a small boy with antlers accompanied by a seemingly relatively well-known large former NFL player doesn’t really scream under-the-radar. They come across vigilantes out to bring in hybrids for cash, a large group of techno-teens who live to protect hybrids and various other dangers and obstacles.

There are a couple parallel stories involving a doctor and his wife who are at the crux of investigating the genesis and cure for the virus, and another around a woman who holes up in a city zoo and creates an underground railroad of sorts for hybrids. This is all set against flashbacks of times before “The Crumble” and an unwinding narrative of Sweet Tooth’s true origin. Along with Jepperd’s backstory and what led him to be the mysterious loner that he is now. Thing is — and this seems to be a common pitfall when telling a large story like this — the show is way better when we’re hanging out with Gus and Jepperd. The interaction between the two is very well done. Their adventure is kept brisk, and we’re invested in both their backstories and their evolving relationship. So when we duck away to the doctor, and especially the woman in the zoo, things tend to drag a little bit. It’s not boring or anything, but there is always a feeling of relief when we jump back into the main storyline. It’s pretty typical, this dynamic, but worth mentioning.

Overall, the series is an engaging watch. The locations are supposed to be in the US, but they’re almost distinctly not American looking. Which I suppose adds to the whole feeling of alienation that our characters experience in a world that doesn’t welcome them. Not that New Zealand (which is where I believe they filmed) isn’t beautiful in its own right, but it definitely isn’t the Western US. Maybe the Western US after people die and nature kind of takes over, but even the light doesn’t look like what I imagine light looks like in Wyoming. Nitpicks aside, I did enjoy the tone of the show. It struck a good balance between the innocence of Sweet Tooth, the brutality of a post-apocalyptic world and the hope in even the most hardened people. The “bad” guys are a little generic, but ultimately it’s the fear that breaks people, makes neighbors turn on neighbors and everyone turn on children unfortunate enough to be born different.