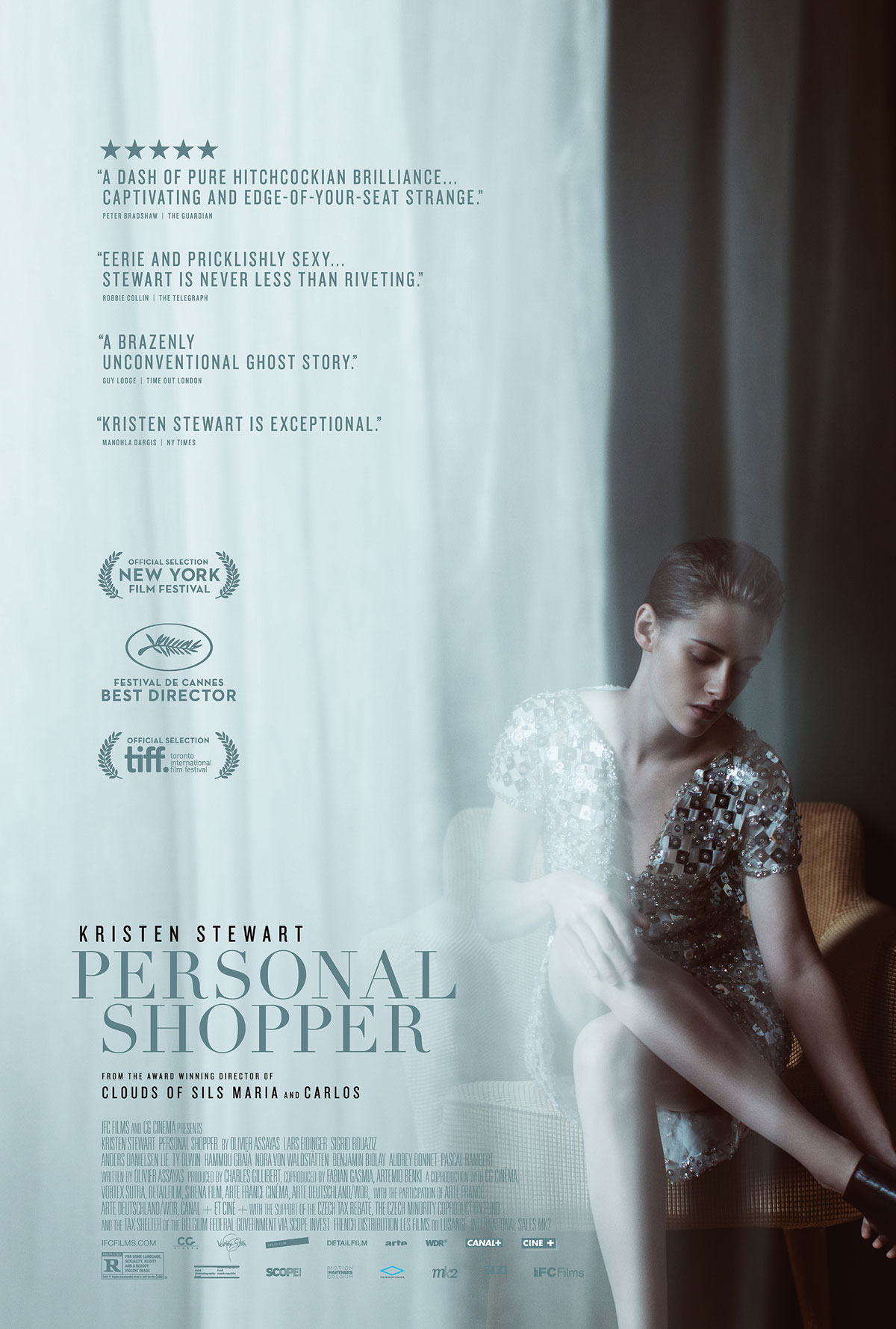 If you like Kristen Stewart, you’re gonna love Personal Shopper. Personally, the only thing I’ve seen her in is Panic Room, a movie in which she was twelve. She was twenty-six in this movie, and I totally see the draw. Her face (and other parts of her, I suppose) graces the screen almost the entirety of the time, the camera lingering on her, caressing her face and otherwise watching her very controlled performance as she subtly shakes, sometimes leaks tears, but mostly puts on and takes off a motorcycle helmet, parks a scooter and reads her iPhone. But, somehow, we’re still enthralled?

There’s no fooling anyone into thinking this is an American movie. Not that they’re trying for that, of course, but the pacing, the fades between scenes and most obviously the fact that it’s shot in Paris makes for a uniquely non-American feel. This all despite the fact that its lead actress is distinctly American and in her almost masculine gate kind of grinds against both the femininity of her job and the distinctly female city in which she lives. And it’s this, uh, Frenchiness that in my mind allows this film to get away with some of the intentional (or we have to assume it’s intentional) ambiguity that the writer/director, Olivier Assayas, builds into the plot. It’s like one of those narratives that launches a million Reddit threads, and none of them can agree on what the hell was going on. I think us Americans just like our stories wrapped up with a bow and for our theories to be validated. I don’t think Assayas wanted anything to be clear. And I suppose we’ll have to be okay with that.

So what does happen? Well, Stewart’s character, Maureen, is an American in Paris who works as a personal shopper (duh) for a rich Parisian socialite. She drives around on her scooter picking up dresses, shoes, purses and jewelry from different boutiques for her boss to wear and be photographed in at soirees and on the pages of magazines. It’s frivolous and whatever, but Maureen is hanging around Paris waiting for her recently deceased twin brother to give her a sign that he’s okay in the afterlife. After all, they made a promise to each other that whomever died first (both having a congenital heart defect that makes them susceptible to heart attacks) would give the other a sign that they were cool. This is probably where I should mention that they’re both mediums. Not the t-shirt size, but like people who can commune with the dead. Convenient, to be sure.

To go through this thing without spoilers is almost impossible. Maureen sees ghosts. Or does she? Who are these ghosts and what are they trying to tell her? Is she a psychic or just a victim of psychic trauma? Again, the ambiguity is thick.

So, okay, here be some spoilers. There are a bunch of theories that align this movie with The Sixth Sense. That one of the characters is actually dead and doesn’t realize it, but somehow interacts with a bunch of people anyway. And they interact with this person. This, of course, is not what happens in The Sixth Sense. In that film, the person who is dead, Mr. Bruce Willis, is present in a bunch of scenes in which he thinks he’s interacting with people, but he only realizes later that none of them interact with him. In this film it’s clear everyone can see this character and that this person has to be alive (unless, again, Assayas just doesn’t care about logic). Others liken it to The Babadook. That’s the psychic trauma thing where pain and sadness manifests itself in real life ghosts and ghouls. That feels more inline with what is going on in this movie. But, like I said, this movie is French, so there is just a bunch of shit that could be just about anything. Whatever the case, I actually enjoyed the wishy-washiness of it, head fakes and all.

This movie is kind of half ghost story and half psychological thriller. Of course “thriller” is one of those words that is usually a little over the top for what’s going on. It feels like one third the movie involves Maureen reading increasingly creepy texts coming in on her iPhone. It’s a particularly modern film that way, leaning heavily on technology and the kind of secondary commentary on the ills of online social celebrity. I’d say the iPhone is actually the second lead in the film. The thing that is really interesting about it is that Assayas, in his ambiguity, manages to make a film that is almost a choose your own adventure in a way. You can kind of follow the straight thriller plot and assume that our protagonist is being stalked by a real person on her real phone, setup for a murder and catches the real killer through the normal means of trickery with the police. Or you can take a more spiritual track and assume her brother is, in fact, looking over her and helping to guide her through her travails. You can go full Babadook and assume everything that happens in the movie is a manifestation of her psychological trauma. Or you can go all American with it and assume some Sixth Sense stuff that the evidence just doesn’t bear out. Whatever line you take, it’s one that will stick with you.