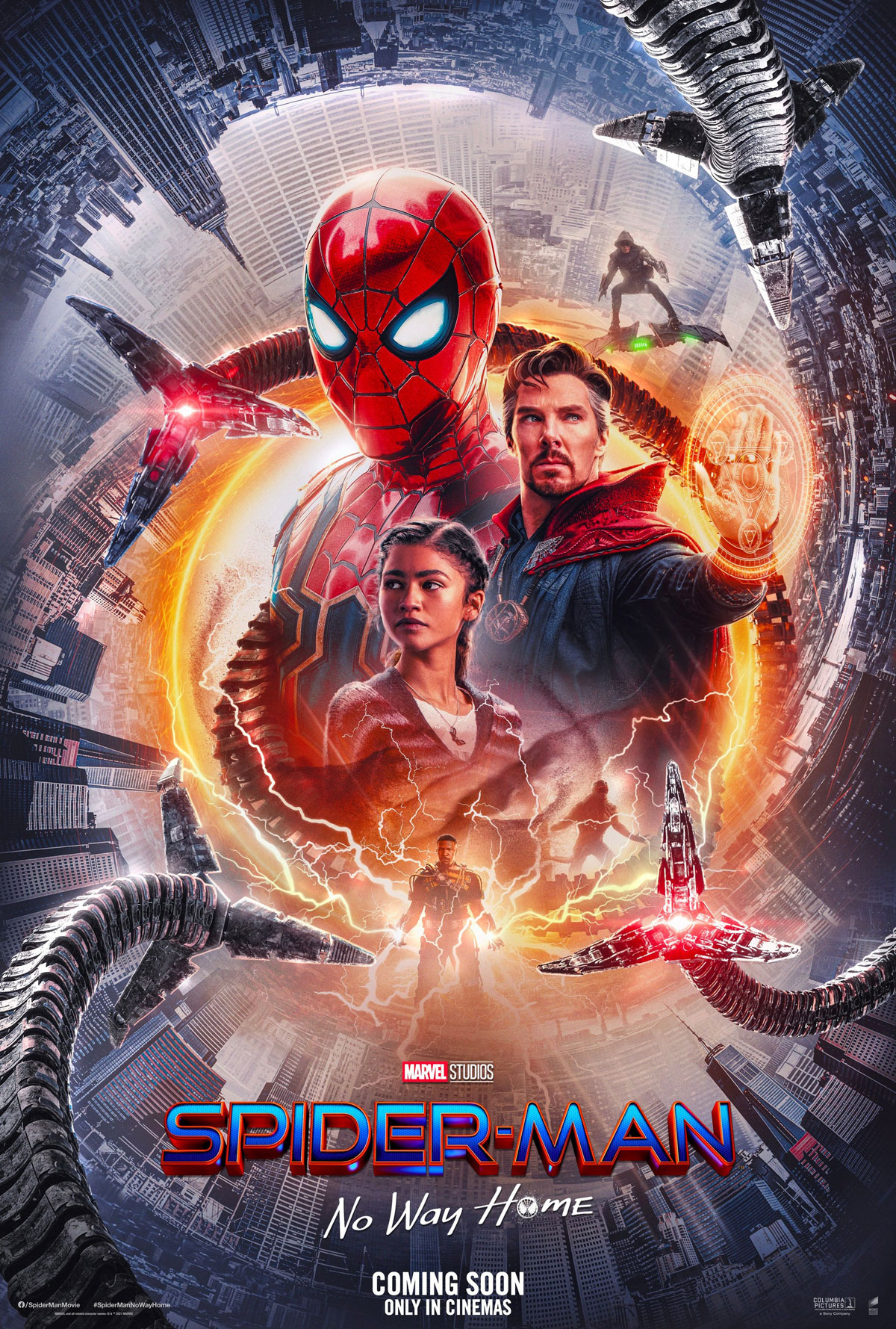 I’m honestly not certain anyone needs to read a review of yet another Spider-Man movie. Especially one written by a dude roughly three times the age of the target audience for these superhero movies. I have no inside info, and absolutely no knowledge about the Marvel universe beyond the films I’ve seen over the past decade or so. I was never a comic book guy and had little to no interest in general about dudes in tights. Or capes. Not that I didn’t watch both Spider-Man and His Amazing Friends and Super Friends back in the day, but I was a child and had terrible taste and there were only like five channels and kid’s television was basically garbage. So, in comparison, this movie and its ilk are amazeballs!

The thing here is that I’m so clueless about the genesis of this universe and all that that I’m not sure what’s a spoiler and what isn’t about this film. Um, Tom Holland is in this one. As is Zendaya. But I think I’m not allowed to say who else is in it? But if I don’t do that, how am I supposed to summarize the thing? The two dudes next to me in the theater grabbed each other and squealed when a certain actor showed up. And then another. It was not a surprise to me because I know enough about the multiverse and had listened to enough podcasts to know what was going to happen. And I went to it relatively late, so the fact this couple was surprised was surprising to me. But the point is that the plot was kind of superfluous, so recapping it is pointless. But I suppose I’ll give a little detail.

When we left Spider-Man last film, his identity had been exposed and every thought he killed this other superhero dude that nobody really knew or cared about. So it’s weird that the whole thing blows up the way it does. But, whatever. So Peter Parker goes to Doctor Stranger (Benedict Cumberbatch) and has him do some sort of incantation to erase peoples’ memories so they don’t remember he’s Spider-Man. I think. All of this makes absolutely no sense to me. This magician dude essentially casts a spell that is suppose to erase a few memories — but just erases their memories of Peter Parker specifically? Which then opens a hole in the universe and lets in a bunch of dudes you’ve seen in past Spider-Man movies? Whoops, I ruined it. Point is, he does all this and nobody remembers Peter Parker. But I think the point was to make them not remember he was Spider-Man, not forget him all together. I think? So, it made me wonder who people like, say, his girlfriend and best friend thought this dude was who they had tons of photos of on their phones? And presumably in their yearbooks (also presumably with the name Peter Parker below his photo)? He may have erased their memories, but there was no mention that this spell wiped all news archives, YouTube videos revealing his identity, personal media of friends and all trace of him in physical print, etc. Did his aunt look at the photos of him in the apartment, the forms with his name on them that she inevitably had to fill out for school and the doctor and whatever else, and the room with all his stuff in it in their apartment and wonder, “Hey, I wonder who lived here?” Seems like a major plot hole, unless I’m misunderstanding vague magic.

Putting that aside, I felt like there was a kernel of fun here. But they did the thing where they have too many bad guys in one movie. Which is a problem almost each and every time they try to have more than one. You need one bad dude to focus on, but here there are like entirely too many. Which just means you get to know none of them — even if you’ve met them before. It’s stupid. And because you have all these dudes, you end up having this monumental battle scene that I’m sure someone somewhere thinks is cool, but is the trap that so many of these Marvel movies fall into. GCI fights just aren’t fun. Or cool. They’re generally too frantic and too dark to be of any interest. And this one is no exception. Just lots of swinging and falling and flipping and stuff. It would have been way more interesting if they just would have stuck with Peter Parker’s relationship with his friends and what the hell he was going to do when Doctor Strange broke the universe. Instead, we have to have him pall around with doppelgängers and beat some old baddies decades past their prime. They did the fan service thing instead of doing the smart or interesting thing. Also, I don’t get the Doctor Strange character. At first he’s all whimsical and funny and weird. And then he’s just kind of a buzzkill hard-ass. Is he supposed to be schitzo, or is was that just inconsistent, poor writing?

Overall the movie was just okay. I know it wasn’t for me, and I’m probably alone in that feeling. I liked when Peter and his friends hang out. I like the light, fun stuff. I like the awkward stuff. But the digital fighting and the mess of a plot around this multiverse — stuff that you’d think they’d have down — is just kind of a drag. Also, Doc Ock and the other bad guys who he fights in this are kind of lame. Look, I have mechanical legs attached to my back! Look, I’m made of sand! Look, I’m a half-lizard dude! And a guy who works at the power company, or something! I dunno, none of them ever seem like much of a threat, and just didn’t rise above a ho-hum on the interesting scale. They had no grand plan, which is the hallmark of these types of movies. Instead they are just street fighters who want to beat up Spider-Man. Which doesn’t a plot make.