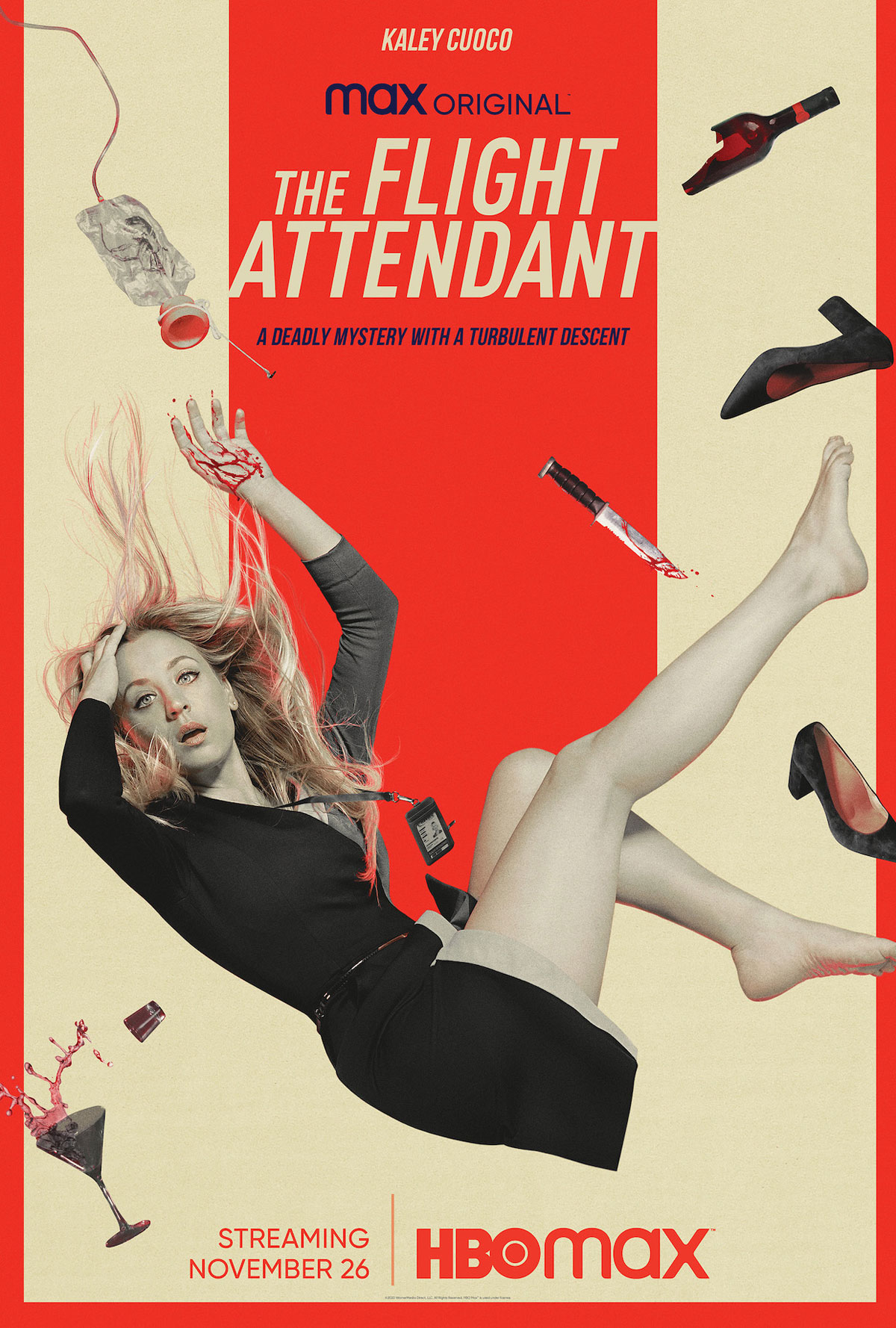 This show feels very much like a bunch of late 2010s trendy genres all mashed up into one series. As if the creators of The Flight Attendant looked across the peak TV landscape and were like, well… what if we take a little piece of everything that people find irresistible about quirky comedy dramas and shove it all into one thing? That way people will extra specially love it!

What does this entail, then? Well, you have your flawed female lead. Flawed in the fact she’s a raging alcoholic who is also promiscuous, flakey and seemingly not a great friend. Then they take this flawed main character (who makes similar female leads from, say, Fleabag and High Fidelity look like total angels) and have her wake up next to a man’s dead body after a night of drinking and doin’ it. The dead-body-in-bed-how-did-this-possibly-happen trope is as old as the hills, but the whole gender switcheroo there feels of the moment. Then we layer all of this over with our main character’s internal thoughts, manifesting themselves as a visual dialogue with said dead man as a major plot device. And there you have your very 2020-feeling series.

I do have to say that I’ve never seen a full episode of The Big Bang Theory. But apparently Kaley Cuoco starred on it for twelve years and 280 episodes. That’s amazing. I don’t know if she was the main draw, but she is on screen for the entirety of this thing and she’s great. Functioning and non-functioning alcoholic. Smart, but not brilliant. Self-absorbed, but repentant. She plays all the parts in a really compelling manner. She even manages to do that thing that every drunk girl in college manages to do: make it look like her face is sloughing off her skull. It’s impressive.

The plot, as I mentioned, involves Cassie (Cuoco) the flight attendant. She drinks way too much. And travels internationally, partying it up in foreign cities with foreign men. One night in Bangkok (clearly inspired by the Murray Head song) she hooks up with an American dude, Alex (Michael Huisman), parties it up in his fancy suite, sleeps with him and spends the night. In the morning, she is sleeping not next to Alex, but next to a corpse with its throat slit. Hungover and confused, and with no memory of the night before, she ends up cleaning up the room and trashing the evidence. Then she gets on a plane and flies away. The rest of the season, she spends trying to uncover who killed Alex, hoping upon hope that it wasn’t somehow her. Even though it’s pretty clear from minute one that it wasn’t her. To help her untangle the clues, she has “conversations” with Alex inside her head. Which are projections of Cuoco and Huisman talking in the Bangkok suite, forming a relationship that is — like everything else involving Alex — all in her head.

Helping her in the real world is her best friend and lawyer, Ani (Zosia Mamet). She plays that same whip-smart, fast-talking sarcasm monster that she always plays. But to perfection. Ani is constantly challenged by her friend’s drunkenness and subsequent inconsistent and self-sabotaging behavior. There is also Cassie’s brother, who is the sounding board and trigger for our flashbacks of Cassie’s younger life. Which involves all sorts of repressed memories of her drunk father (Jason Jones) and the abuse he inflicted on her brother and really bad parenting — and a serious taste for booze — he put on her. You know: the “serious” stuff.

The show is fun and even funny at times. Yes, it gets a little tiring watching Cuoco opening bottle after bottle of mini vodkas from the plane, but otherwise the chase to find the killer is decent. It’s all the other stuff around it that is a little less fun. Starting with the mechanics of the mystery. It’s overly complicated at a high level and stupidly nonsensical at a detail level. There’s like international arms deals and plans and this shadowy cabal of businesses and whatnot at the macro level. But then there is a bunch of computer hacking bullshit at the micro level that is total yada-yada nonsense. And there is this total side narrative around one of Cassie’s co-workers, Rosie Perez, that is completely convoluted and I’m still not sure how it’s connected to the main plot line. Aside from this little jog at the end that ties them together — but barely.

Despite some fat that could have been trimmed (and some clarification what the hell that Miranda character is all about), the show is a lot of fun. The actors have great chemistry (even dead Huisman pulls his weight) and the writing is sharp for the most part. The somewhat clunky mechanics are overridden by the vibrant performances, whimsical direction and pithy banter. All in all, this is probably a great second-wind vehicle for Cuoco coming out of a sitcom that I can only imagine netted her enough money to buy and sell the airline she fictionally works for on the show seventeen times over.