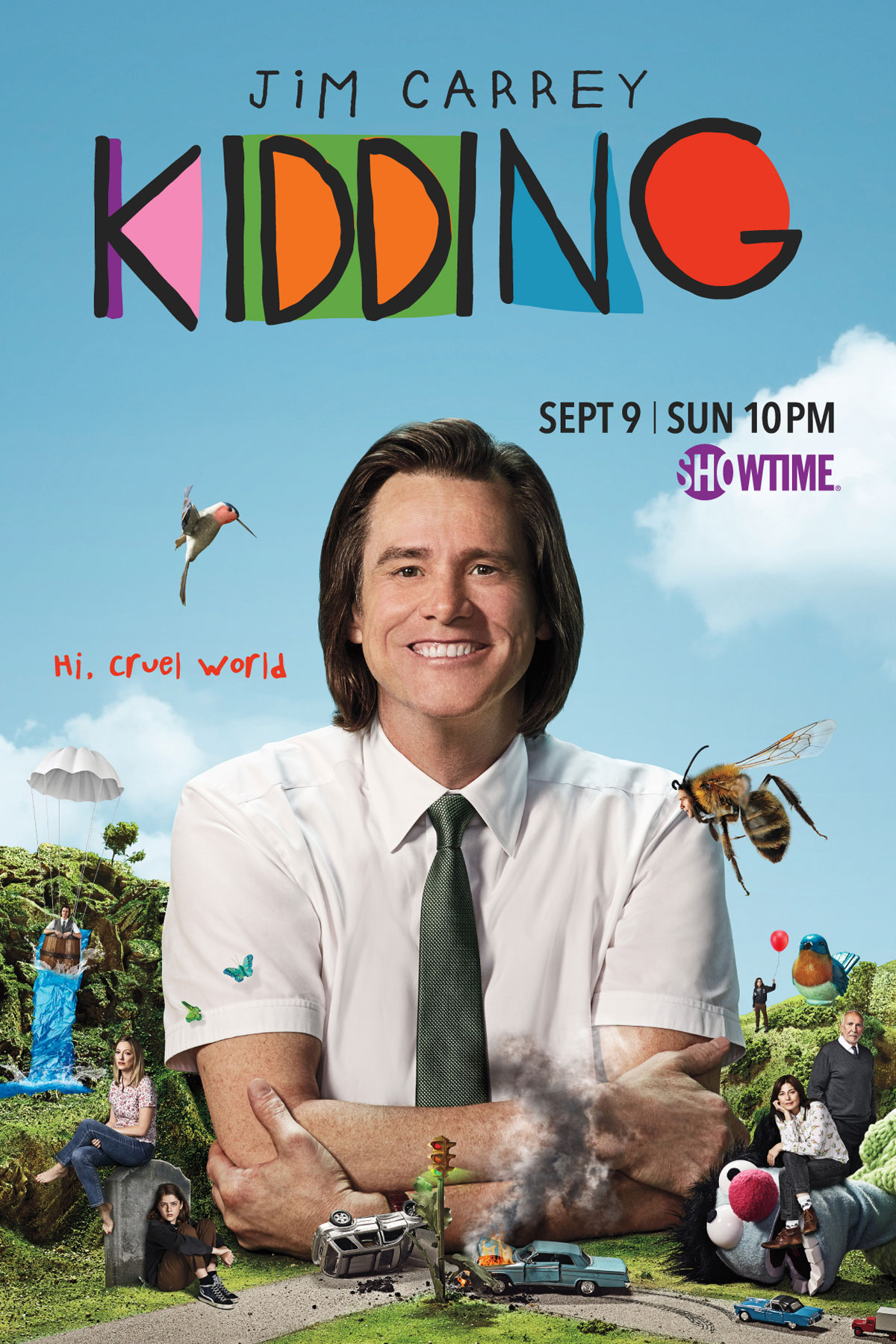 I’ll start by saying that Eternal Sunshine of a Spotless Mind is one of the weirdest and more wonderful movies I’ve ever seen. When I left the theater in 2004 I felt like something had burrowed into my head and that I had experienced a film that was somehow transcendent. Part of that was because I could barely understand what I’d just seen, of course, but for some reason it didn’t even matter. So when I heard there was going to be a new series re-pairing Jim Carrey and his director, Michel Gondry, I was more than psyched. After all, serious-ish Carrey (but not too serious) is generally not a bad thing. The Truman Show… Uh, The Majestic. Erm, The Number 23. Shit, ok, his dramatic resume has been a bit spotty, but the man can act. Plus, it has the word “kidding” right there in the title, so how serious can it be? I mean, not like peak TV serious, right?

Well, half right. Because, of course, this is Gondry, so it’s not as if we’re going to get straight drama or straight comedy. Not that he created or wrote the series (nor was it written by his Spotless Mind collaborator, Charlie Kaufman), but it certainly is constantly affected by his sense of deeply creepy whimsy. Or, sometimes, just disturbing creepiness. And puppets. Lots and lots of puppets. Which makes sense, as Carrey plays a character named Mr. Pickles, who is basically a Mr. Rogers type guy appearing on what closely resembles Pee-wee’s Playhouse. So, he is a children’s show host who interacts with both puppets and inanimate objects, as well as adults in costume. His approach is super-gentle and quiet, much like Fred Rogers, but there is wackiness and silly characters like on Pee-wee’s show. The series and the merchandising empire it has spawned is run by his father, Seb Piccirillo (Frank Langella), and all of the character’s are fabricated by his sister, Didi (Catherine Keener). So, it’s a family-run endeavor, but it’s clearly an international phenomenon that has become part of the fabric of society and almost all children’s lives around the globe. So, on the level of like a Sesame Street.

Thing is, America’s favorite children’s show host has some deep-seated issues. More like the world has some issues, and after taking all of them on his shoulders for years, the cracks are starting to show. Mr. Pickles is supposed to essentially be a genderless walking embodiment of all that is good. He talks to kids in dulcet tones and spreads advice about self-empowerment and making children feel good being exactly who they are. He is beloved. But Jeff is a real man with a real life with a real kid and a real wife (see what I did there). And while there is not much of a difference between the neutered man he plays on television and the husband and father he is at home, he can only take so much. His wife leaves him for a doctor at work, his son is smoking weed and hanging around with hooligans. His dumb cell phone is a simple, old model and his car sucks. His passivity and Jesus-like demeanor may play well through the TV box, but it’s clearly costing him in his real life. Oh, and there’s also a dead child — because of course there is. The less favorite of his twin sons died in a car crash and clearly Jeff has taken it and internalized it.

And everything is starting to rupture. On screen, in his real life, everywhere. His revolving breakdown threatens the Mr. Pickles brand as he pushes his father to do a very honest show talking to kids about death and freaks out and shaves his head. As Seb watches him unwind, he threatens to hire a voice actor and “animate” him and even does a deal for “Pickles on Ice” where he is to be played by Tara Lipinski in a giant Jeff Pickles head (despite the fact he can actually skate really well). All of this because it would be super-disturbing and not good for business if the world’s most famous talker to kids were to unravel on air or in public (which he does a couple times). In his controlled mania he also buys the house next to his estranged wife in order to spy on her and is living in a ghetto-ass college dorm building despite having tons of money. He’s a man who lives by a very specific set of rules, but the world doesn’t fight fair.

So, while there is comedy in the show, it’s pretty dark. And while there’s sentiment in the show, it’s pretty twisted. Also, just about everyone is sad. Even the puppets seem sad (which becomes obvious why in the final episode). The cast is all really great and Carrey’s face acting that was once used to make us howl with laughter in things like The Mask and all of his In Living Color work is now used in this weird way where we can see his crying soul peek out from his smiling face. He can somehow put two faces on at once and is the perfect person to play this very complicated role. I was excited, but concerned, when I first saw the trailer and wavered a bit during the season at some of the jarring sexual stuff, but ultimately felt like this was a nice throwback to one of Gondry’s other sentimental films, The Science of Sleep, and really did a great job of ultimately circling the wagons and made this way more than just a dark comedy with some puppets. It hits you right in the heart as it wraps for the season (but without being even remotely sappy) and gives you a reason to want to tune in for season two to see if we can pull out of the heartbreak.