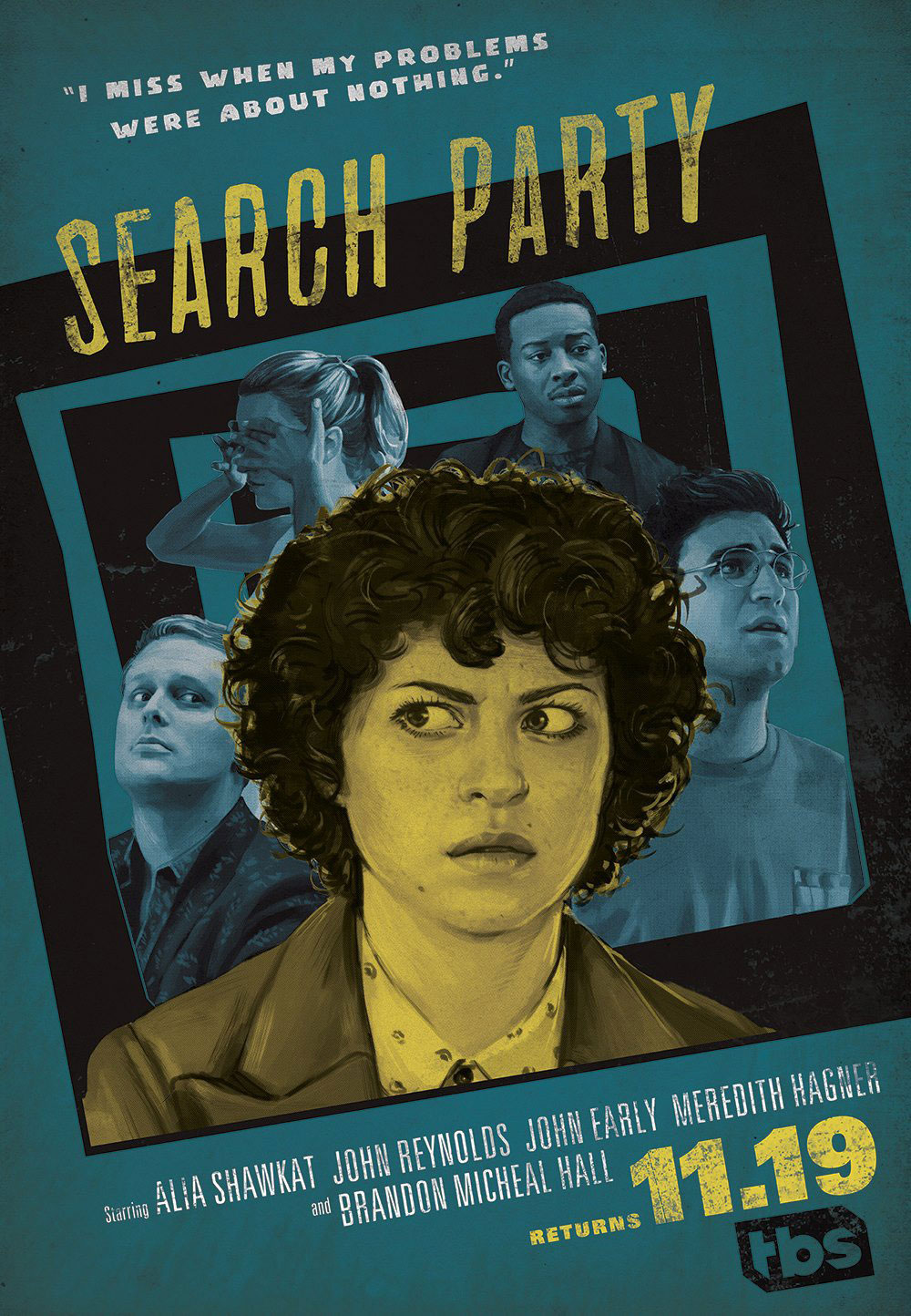 Nobody loves to see millennials get their comeuppance more than me. Search Party season one was about a group of these wonderful young people flitting around and ostensibly looking for some meaning in their otherwise useless lives. Rather than going and getting a job or something responsible that generations have been doing for, uh, generations, they essentially decide on going on an adventure. And their poor decisions lead them into danger, which leads to murder, which leads to a conundrum and season two.

Now, I assume you’re reading this because you’ve seen season one, so I’m going to get those spoilers out of the way. Keith (Ron Livingston) is dead. Drew (John Reynolds) hit him over the head with a heavy award obelisk in a dubious case of self-defense. So this season becomes one of consequences. What happens when you get in over your head and make a bad decision for the wrong reasons that leads to someone else getting hurt?  Your frivolity can only last for so long before reality hits. This reality is having to bury Keith, clean up the murder and get away with it.

Thing is, these are not criminal masterminds. It probably takes all of their will not to Instagram the murder scene. The group tries to get on with their lives, but all have this secret hanging over them. All react in different ways. Drew, the ex-boyfriend and technically the murderer, tries to sabotage a co-worker’s marriage in order to win a plumb job with the company in Shanghai to just escape the US. Portia (Meredith Hagner), the flighty actress, throws herself into a role and the director, who becomes almost a bizarro life-coach, telling her to cut out all things fake and damaging in her life. Somehow this advice doesn’t extend to her dumb-ass friends, but she does become one of the more sympathetic characters. Elliott (John Early), the ultimate narcissist, shows himself to be a completely despicable person, breaking down while trying to write his book about how he lied about having cancer while also keeping this giant secret. And Dory (Alia Shawkat). Oh, Dory. She turns out to be the worst. A haunted, but manipulatively horrible person who seems to have the deepest-seated issues of them all. She’s clearly snapped and her motives are completely unclear, despite her always talking about her just wanting to protect her friends. Based on where she ends up, Dory is just as selfish as she was when she got them all entangled in this situation in the first place.

Adding to their stress, a cop is on their trail and a crazy neighbor kind of Rear Windows them and is using it to her advantage for a big payday. So our characters plot and move in order to cover their tracks and constantly put out lies to Chantal’s (the original person being searched for by the search party) family, the cops and each other. It’s a circle of self-preservation and incompetence. It’s how real young people would try to cover a murder, however: completely inept and overtly stupid about things. And, again, let me point out that these are bad people. They aren’t supposed to be likable, but are somehow relatable because of the strong writing and acting and a plot that is breezy and clearly mean to at times shock and at other times make you really fucking glad you’re not them. I was wondering how they were going to move on from season one, as the search in the search party was technically over — and was hoping they weren’t going to form a detective agency or something and just do another search — but the show’s creators did a great job of moving it ahead and fleshing out the characters to the point where they are distinct and interesting.

The show does go super-dark — even darker than a show that, of course, ended with a murder in the first season — which was a bit surprising, but I can’t say I hate that twist. There was some weird sexual harassment nonsense with a female senatorial candidate towards Dory’s friend, Julian (Brandon Micheal Hall), that happens that was a bit out of left field that I really didn’t get and didn’t particularly like, but it didn’t completely deter from the overarching plot. Though it was really, really odd and confusing. And, sure, there is some other stuff that was a bit absurd — like a cop somehow not being keyed by a giant “murderer” painted on Dory’s door right before she interviews her about a murder — but the show itself is compelling and extremely bingeable. It’s funny to see that there are some pretty intricate fan theories online about a bunch of things on the show, as I never really took it as a show like True Detective, but more like a dark comedy in which our characters happen to shed some blood.