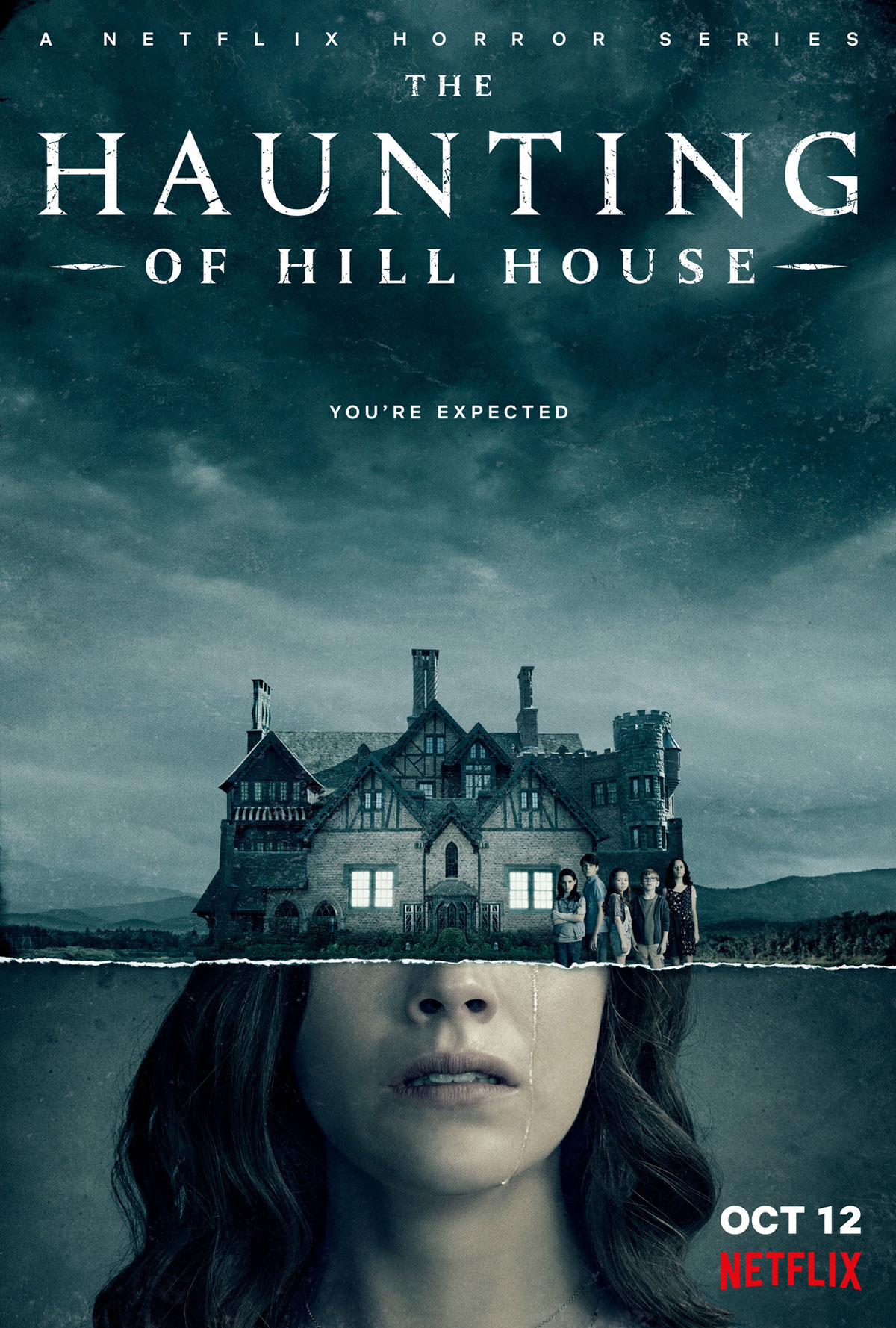 The Haunting of Hill House: Season 1

I wish I could have gotten this review in prior to Halloween given the fact it’s ostensibly a supernatural horror show, but there’s just so much TV out there. I couldn’t get around to it until the leaves started changing, the skies turned gray and everything got cold-as-shit. Honestly, though, I generally have very little interest in shows like The Haunting of Hill House, but I was inspired after watching The Babadook and hearing some decent reviews form some folks whose voices I trust. Otherwise I’m a giant pussy and prefer a good rom com to some bloody horror movie or jump-scare bonanza. This show didn’t really provide the type of scares or gross-outs that should keep the squeamish or moderate wimpy away. Things tend to be more psychological than a movie like Saw or one of those Hostel flicks. It’s much more akin to the first and sixth seasons of a similar haunted house series, American Horror Story: Murder House and American Horror Story: Roanoke, or something of its ilk.

The setup of the show is a little funky. A family, consisting of a mom, dad and five children move into this creepy-ass, old house in the middle of nowhere. It’s unclear where exactly it’s supposed to be, but I just kind of guessed it was Vermont or New Hampshire or something, although it was filmed in Georgia like everything is these days. That’s kind of neither here nor there, but the family has moved into this giant mansion in order to “flip” it. Now, I’ve watched a lot of HGTV and there are very few instances where anyone would take on a project this big. They don’t give you the stats about how much they paid, exactly what their timeline looks like and what exactly the repairs and upgrades are, but Hill House looks like a huuuuuge job. Granted, it sounds like the father, Hugh Crain (Henry Thomas/Tim Hutton), is an experienced flipper, but even he must know that the audience for a house of this size and with a background of murder and death on the books will greatly impact the potential return on investment. I don’t want to doubt the guy, but I think that in most states one has to disclose if like entire generations of people died in the house you’re trying to sell. I’m just saying that perhaps Hugh isn’t so good at his job. Anyway, the idea is that this is his last big flip and they can take the money they get from the sale and buy some land on which they can build their “forever house,” which is being architected by the mom, Olivia (my other girlfriend, Carla Gugino).

So, of course, things don’t go to plan. And, again, moving your five children into a clearly haunted house probably isn’t the best move, but creepy shit starts happening. At first it’s just noises and bangs (that they blame on old pipes, duh) and then clear hauntings, nighttime wanderings and warnings from the caretakers who refuse to even come onto the property after dark. It’s the old Eddie Murphy haunted house bit from Delirious: white people find out their shit is haunted, but they stick around anyway (i.e.: Poltergiest). Which is both stupid and irrational. It’s unclear if Hugh’s denial of his daughter’s claims of seeing “the bent-neck lady” and his son’s claims to have seen and being attacked by something truly awful in the basement (despite actual physical evidence) are intentional or just a instance of ostrich syndrome, but his poor parenting borders on criminal. Olivia, the mom, is clearly also suffering from some mental malady. I blame it on having five children, but we’re supposed to assume it’s some effect of living in this house that is kind of a living, breathing organism with its own supernaturalness in some of the same ways the Overlook Hotel has in The Shining. In fact, the parallels there aren’t completely dissimilar, but Kubrick’s masterful direction made that movie way more haunting than this series.

Ultimately bad shit happens (because we knew it would) and the family is forced to flee the house. The kids are just kids at this point and Hugh is Henry Thomas. Cut to 25 years later and all the kids are grown and Hugh has become Timothy Hutton. Thing is, Hutton is only eleven years older than Thomas. So, weird casting choice. Gugino is still Gugino because, **spoiler**, she’s dead. She too is only eleven years younger than Hutton, so maybe this is part of the reasoning for hiring a younger actor to play the older version of Hugh so it didn’t look as weird when they interacted in the future (clear, right?). I don’t know, but it was a hard thing to get past for me. But I’ve obviously given away the fact that there are ghosts in this show. My issue here, once again, is that there doesn’t seem to be any rules around how the house and the associated ghosts work. This mechanics thing is a big issue for me, always. We’re told at one point that the house is only a problem after dark. Yet we see ghosts and other bad things during the day. We are told that outside the house people are generally safe. They break that rule at every turn. Ghosts and weird shit shows up in parks and funeral homes and apartments and wherever the seemingly lazy writers decide works for their liking. Though — and this is a concession on my part — all of this can be completely ignored if we take anything and everything in the show as metaphorical and attribute every weird thing that happens to the kids and parents alike to mental illness, depression and trauma. Popular themes in horror these days (see my previous mention of The Babadook).

I’ve kind of presented this as if it’s a linear story. It’s not. We flash back and forth in time constantly. We see the kids as kids and then as adults and back again. We kind of get the forward story (which would be the opposite of a backstory, I suppose) of each one of the siblings and eventually work our way into the backstory of the parents. Each one of the five siblings has suffered his/her own trauma because of his/her time in Hill House. The oldest sibling has become a famous author, penning a fictionalized account about their time in Hill House. One daughter has become a hardened funeral director, another a clairvoyant promiscuous lesbian child psychologist and even another a kind of damaged soul who battles depression. The youngest of the bunch, Luke, who was once a scrawny little dude with Coke-bottle glasses has somehow grown up to look remarkably like a buff version of Aaron Rodgers, but with a really bad heroine problem. Again, weird casting. Each character gets his/her own bottle episode that shows his/her time in Hill House and what has become of his/her life. It’s a nifty setup that works well with the serialized television format. It gets a little disjointed as they try to keep the main through-line going as they branch the stories, but it’s certainly beyond me to figure out how to go both deep and wide.

I’ve heard it said that horror is the new post-modern. Actually, I just made that up, but it fits. Everything here is metaphor. Everything represents something else to some extent. The father doesn’t think his wife is crazy. He doesn’t think his daughter is depressed or that his son’s drug addiction is possibly part of his struggle with inherited mental issues. It’s the house’s fault. The house, which obviously amplifies the issues that the family would struggle with throughout their lives. The eldest son, taking the opposite tack, blames all that has gone wrong on their broken brains and is skeptical that a house can drive unfortunate events because he has somehow avoided seeing the bad shit the others did. Regardless of which is true, they are drawn back to the house, which is the ultimate arbiter of their fates. I know people liked this show, but there is some serious clunkiness and inconsistency with the writing, and sometimes it felt like the actors weren’t necessarily in the same show from scene to scene. Not to mention that the end has some seriously painful sappy writing and some directing choices that kind of compound the cheesiness. It’s not quite enough to ruin the show, but that, along with the confusing and seemingly arbitrary haunting rule set, do definitely make you wonder how much better the show might have been if someone made sure shit was a little more buttoned-up.