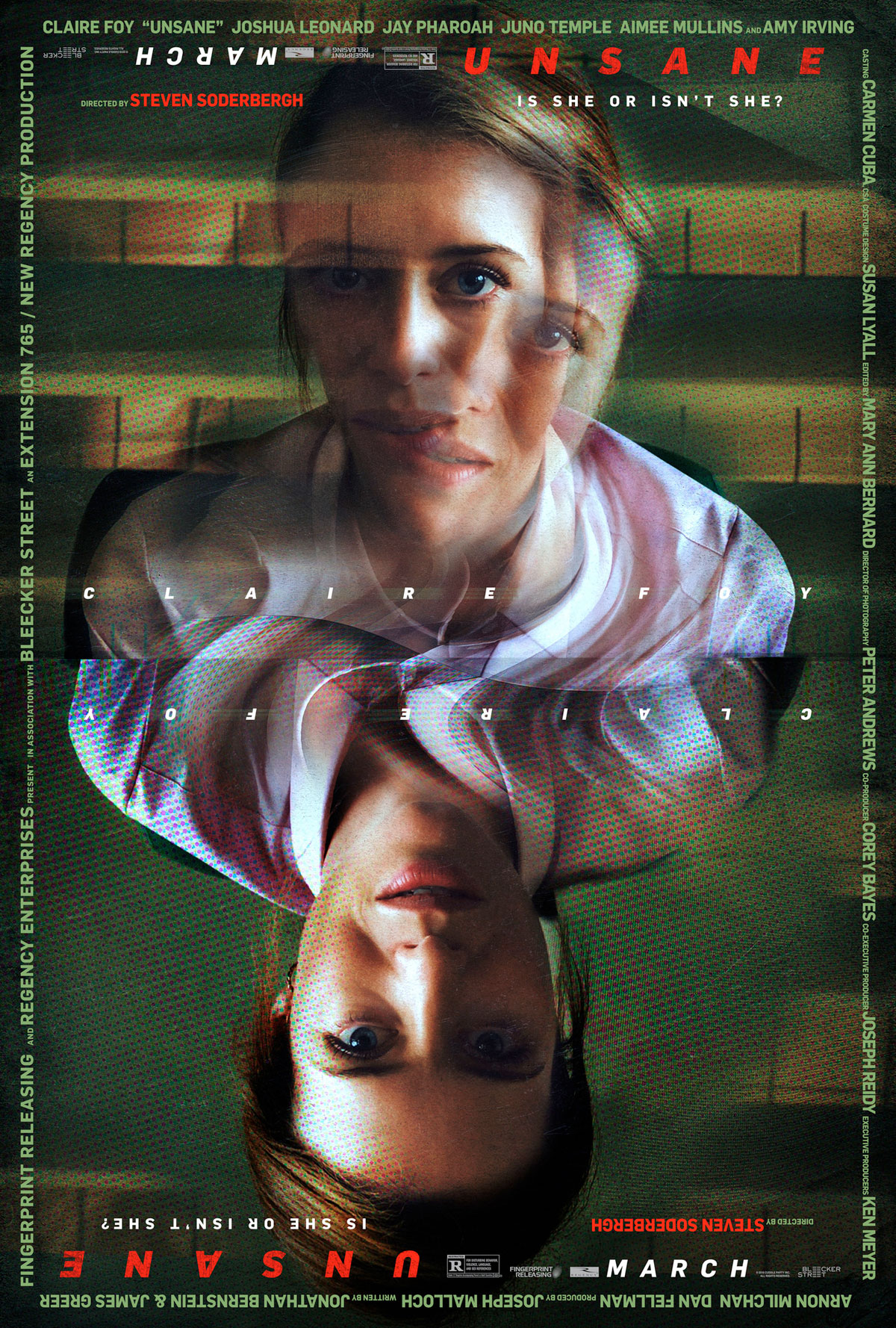 Steven Soderbergh, the man behind the Ocean’s movies and all sorts of other commercial-type stuff both decent and not as much, is now apparently an “experimental” filmmaker. Unsane is part of his whole “I’m going to shoot a feature-length movie on an iPhone” phase. It’s also him dabbling in a genre that feels absolutely wrong for him, quite honestly. And I’m by no means a Soderbergh completist, but it feels to me like he took this one on almost just to see if he could do it and not because he gave two shits about the story or the characters or anything other than being able to say he made a “film” on an iPhone 7.

Let’s get this out of the way: this movie is garbage. The thing looks bad, the script is terrible and the acting is not particularly strong. The whole thing just feels half-assed in the worst, most cynical way. Like Soderbergh wrapped it up and was like, “Welp, proved that shit is possible. I mean, I know it’s complete trash, but let’s put it out there just to prove to studios and the rest of the establishment that I can make a whole film without them. Again, I know it’s a piece of shit, but still…”

The plot of this film I think is supposed to be some sort of psychological thriller/horror film about a disturbed woman who is institutionalized against her will. And that she is. Poor Claire Foy is suffering some sort of PTSD after being stalked, goes to a clinic for some counseling and proceeds to sign a bunch of paperwork without reading it that puts her in a mental hospital for 24 hours. It’s not a particularly scary hospital — what with the male and female patients all just sleeping in a large room together — but Foy’s character is freaked out that she has to be there for literally 24 hours. A day she may actually benefit from? After all, PTSD isn’t a joke and she clearly has some issues. Although when we’re introduced to her issues at the beginning of the movie in the form of a Tinder date, the scene is so dark and the acting so poor, it’s unclear what the hell is going on. But, of course, her making a stink about having to be committed leads her to freak out (in a way that makes it seem like she really may need to be in a psyche ward) earning her another seven-day hold. I’ve no idea if this is how these things work, but it seems unlikely.

Thing is, then her stalker shows up as an orderly at the hospital on like day three. And not just any orderly, but the one who administers the pills every night. At least she thinks it’s her stalker. But, again, because nobody took care with anything in this movie, it’s obvious from the get-go and not really masked that it is indeed him. And somehow, despite never working in a hospital, he knows how to dispense the correct pills and how to be a, uh, hospital person. And also somehow knew that she would be admitted to this hospital the day she was admitted even though she only showed up there randomly because she had an episode that had nothing to do with him? In a city that was nowhere near where she was being stalked by him (because she’d moved to get away from him). And we’re led to believe that it wasn’t because of some underhanded plot by her stalker that she was admitted in the first place, but because the hospital is part of a large network of hospitals that needs to make its revenue numbers and thusly is motivated to admit as many people as possible to fill beds and charge people’s insurance? What in the ever living fuck kind of plot hole is this? It makes no sense that he would know she was there and just kind of magically showed up.

The movie then eschews the “psychological” part of anything and just goes for chasing and stabbing and what is murder for murder’s sake. Things don’t seem to escalate organically at all. It’s as if someone reading the script was like, “Oh, shit, her seven-day hold is gonna be up and she’ll just get out and then I guess the movie will end? We need to turn this thing up to eleven for no real reason other than we need a third act and we already bought the fake blood, so…” It’s just asinine.

And, people. I get there aren’t enough American actors out there to play Americans. Much in the same way there don’t seem to be enough Jewish actors to play Jews. Right? But it seems to me that when filming something, you may want to stop for a second (especially when you’re burning that super-expensive iPhone 7 data plan) when your main actress sounds more like Ringo Starr than a person from whatever midwestern or southern state she sounds like the rest of the movie — despite the fact she’s actually supposed to be from Boston. Can only Irish people and people actually from Boston do Boston accents? Whatever the case, Foy sounds like a British person fading and and out of a weird American accent that nobody has into a British accent that probably nobody has. It’s super-distracting and something you’d figure a veteran director could eradicate.

I get it. People need to take chances and prove things are possible. But why subject us to subpar shit and taint your reputation in the process? Did I mention Matt Damon (and his Boston accent) shows up in a scene in this thing!?