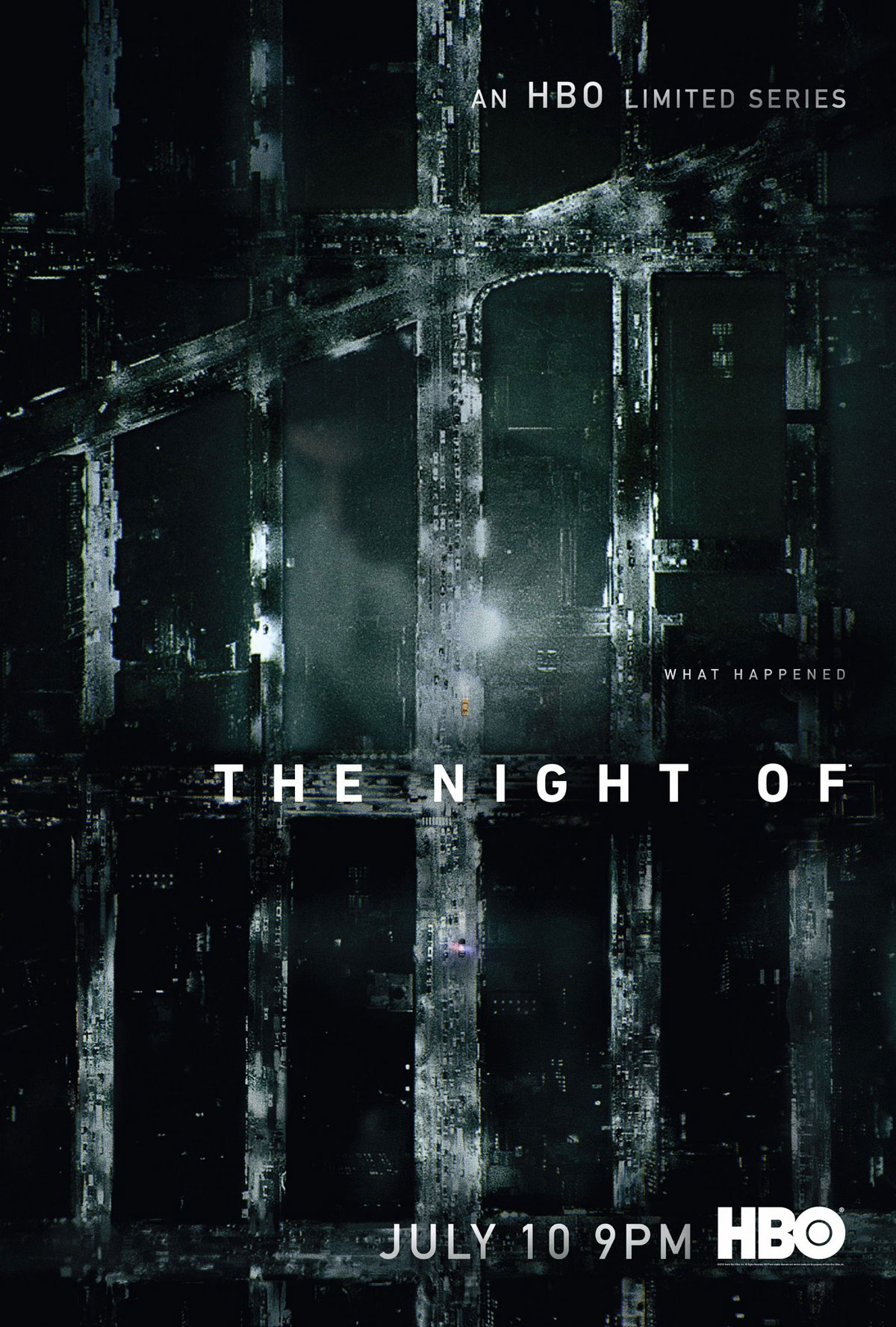 The thing that sets The Night Of apart is pacing. It starts with a night of drugs and sex and murder, which really throws the viewer into what he/she thinks is going to be a wild ride of whodunnit, but once it kind of gets the crime out of the way, it settles the pace down to a slow burn that really chews on its characters and the little nuances that happen between them. It concentrates on dialogue and the feeling of the words in the characters’ mouths way more than it does on the intricate plot points. This isn’t CSI. This isn’t even Law & Order. It’s like the modern literary version of the latter mixed with a smattering of modern crime fiction. Which makes total sense with Richard Price, famous gritty NYC crime writer, at the writing helm.

The gist of the show is that we have this kind of shy, nerdy college student named Naz. He’s the son of Pakistani immigrants living out in Queens. His dad is clearly a hard-working guy, driving a cab and providing a quiet, normal life for his family. Naz gets mixed up in the aforementioned night of drugs, sex and murder and ends up arrested for said murder. He’s booked into Rikers and then we spend the eight episodes watching him adjust and survive in that infamous prison while his case and trial turns on leads, false leads, personalities and the struggles of the working stiffs in the prison and court systems to just get by. It’s interesting seeing an Islamic main character in a role that isn’t your typical Hollywood construct. In other words, he’s not a terrorist or peripheral character. He’s a flesh-and-blood dude who we all kind of recognize. He’s the young man you walk by in Manhattan or sit next to on the train (but, like in a handsome actor’s body). The machinations of the show all feel real and lived-in. From the run-down precinct house to the house out in Queens to the drab courthouse and even the intricacies of the father’s cab medallion share with his Eastern European partners.

So for the vast majority of the series, our protagonist is in prison. And while all of these other things feel so hyper-real, Rikers somehow feels like more of a set. When he first enters prison and goes through all of the indoctrination rituals, we can see and taste the joint. It’s scary as hell. But while things remain frightening, the open pen that Naz sleeps in and the various scenarios that take place in and around it feel more like a stage play at times. Or like a dark version of the show Oz. That could have to do with the literate and philosophical nature of some of his fellow prisoners or just the kind of encapsulated set-up of the surroundings. That took me out of the realistic horrors that they do illustrate within the prison and, while it made me never, ever want to go to Rikers, it made what I imagine is a pretty crowded, claustrophobic experience feel pretty solitary and almost surreal. Granted, there was a lot of heroin being smoked (by the characters, not by me), so who knows?

What is also interesting about the series is how it takes its time and delves into the trivialities of its other characters. We have John Turturro, who plays Naz’s psoriasis-addled lawyer — a man who is apparently the Dr. Zizmor of lawyers — whose life outside of the case takes on just as much weight as the case itself. Or not necessarily as much weight, but is given just as much screen time. Maybe because the lonely life of a New York man in the middle of the trial of his life is just as interesting to the writers as a young man whose promising future being crushed by the system is. His psoriasis help group, his estranged wife and son, his never-ending search for a cure for his ailing feet and his hand-to-mouth law services for various hookers, low-level hoods and drug-dealers. His life is paralleled in a lot of ways with the detective assigned to the case, Sgt. Box (Bill Camp). He too is a lonely, lonely man just trying to do the right thing before he retires from the force. A hard-working, seemingly successful cop who lives for nothing but his job. Friendless and both admired and pitied. There’s just a sad pall cast over every character on the show. A drab melancholy that despite loses or victories never seems to lift. It’s like some sort of shoe-gaze emo filter that’s been applied across the entire narrative.

So, despite what sounds like a pretty downcast outlook and characters that are certainly way more heavy than they are light, the show is compelling. It’s serious when it needs to be serious and occasionally light (but never cheesy) because of the wonderful acting of Turturro. In just eight episodes it makes a lot of points about modern society and really shows us the character of NYC. It throws in just enough momentum, red herrings and twists to keep the plot moving forward, but without ever really giving in to convention.  And even when it has to throw some convention out there — because, after all, it is ultimately a court room procedural — it takes what would be typical and adds some nice little touches and subtle nuance to make it unique. This series isn’t going to be for everyone. For those who are used to those CBS crime shows, this thing will definitely not be shiny and paint-by-numbers enough for them, but the slow-burn and amazing texture of the show is a must see for anyone who is willing to invest eight or so hours to submerge him/herself in this immaculately crafted world.