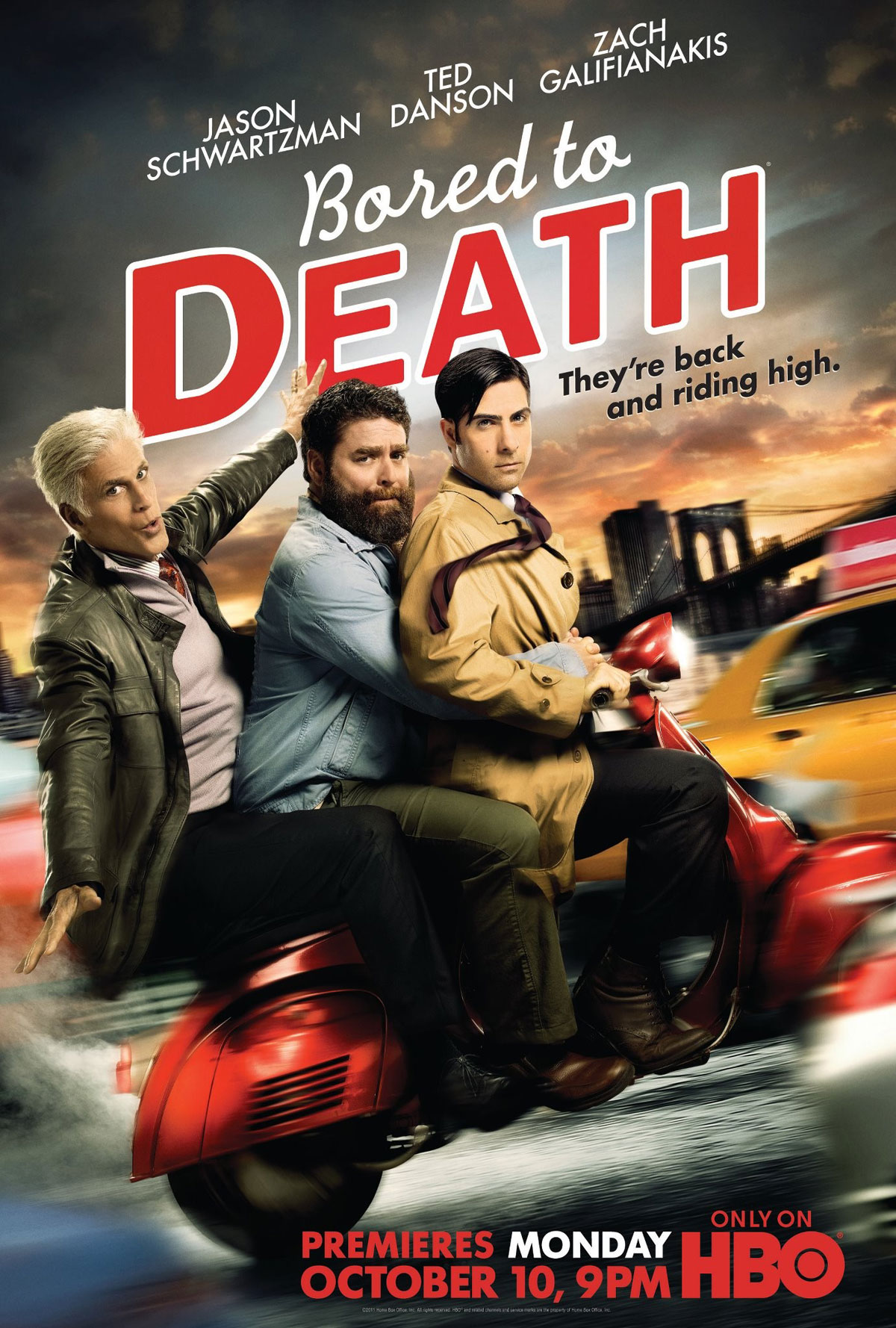 This is a series I think about more often than a lot of others. And Bored to Death hasn’t been on the air for over a decade. In order to figure out why that is, I went back and watched all three seasons and 24 episodes all over again. And I think I figured out what made it special. It’s a kind show. Sure, it’s a bit of a lightweight, twee little thing, but the multi-generational plutonic relationship between the three male leads is ultimately positive and weirdly nurturing in a way that you rarely, if ever, see in any kind of media. Men who — often under the influence of weed or booze — talk about their feelings and are genuinely supportive of one another in a way that is oddly refreshing in a culture that values stepping on your friends and enemies alike to get to some “top” that doesn’t really exist.

This all starts with the cast, of course. I imagine part of the issue some — maybe even including HBO — had with the series was that Jason Schwartzman is the lead. I don’t know this for sure, but just feel like perhaps he’s a divisive actor. His acting style is this mixture of naturalistic and nebbishly stilted. He’s an acquired taste. It’s just that you look at the other two dudes on the Vespa above and you realize you also have Zach Galifianakis, and arguably the best sitcom actor of all time, Ted Danson. You have Danson, and you make that twerp the central character!? What are you thinking? Well, you’re thinking that this series is the baby of author Jonathan Ames. And that Schwartzman plays a fictionalized version of Ames. So if the author and creator of the series says Schwartzman is him, we have to believe him. Because Danson is, well, the opposite of him.

The show is super-low concept. Jonathan Ames (Schwartzman) is a struggling writer based in Brooklyn. His girlfriend breaks up with him and moves out, blaming the deterioration of their relationship on his weed smoking and love of white wine. That, along with his writer’s block and a deep dive into cheap detective novels, leads him to branch out on a whim and put an ad on Craig’s List offering his services as an unlicensed private detective. His best friend, Ray (Galifianakis), is a comic book artist whose struggling relationship with girlfriend, Leah (Heather Burns), and his crushing insecurity is central to his character and relationship. And then there’s George (Danson), a society dude who owns an Esquire-like magazine for which he’s hired Jonathan to write. But more recently, bored with his jet-setting life, has befriended him as bit of a protégé, weed supplier and confidant. Each week Jonathan takes on a new case, which includes mostly recovering inconsequential items, trying to uncover infidelity and just generally taking on cases of people with just enough money (or not) to pay the low detective fees that he advertises in his ad. He’s unlicensed after all.

Each of Ames’ generally low-stakes adventures includes both Ray and George in some way. George, tired of high-class parties and talking to rich people, slums it in Brooklyn and helps out Jonathan in order to feel alive. Ray mainly has nothing better to do. All the while Ames has relationships with clients, subjects and others. He’s constantly interjecting with stories from his own life — mostly about his breakup with his girlfriend — when clients are trying to tell him their troubles. Which would normally be seen as selfish and annoying, but somehow comes off as Ames being both a gentle stoner and an oddly empathetic dude. Sort of. It’s so subtle and obviously comedic that it always seems well-meaning.

Over the three seasons, the three men have their ups and downs and have some very controlled disagreements with one another. But, in the end, they always come around to being incredibly understanding and supportive of one another. Despite all of their quirks. It’s… lovely. The whole thing has this very collegial, cultured and high-minded feel about it. Even if Ray’s everyman comic book superhero (which is just a bizarro version of himself) gained his powers by throwing his giant penis on the third rail. George and Jonathan’s nemeses (Oliver Platt and John Hodgman) are these two erudite Ivy League type weirdos who are just constantly circling and throwing both haymakers and literary insults at one another. It’s hardly life or death. We just have to remember that the series started in 2009, which was the definitely end of an era. The old world literary and glossy magazine society was on the decline, and the monied Brooklyn hipster family on the ascendancy. So to watch that first dying industry battle it out for supremacy between these two men, and a stoner who wears a jacket with patches because he clearly thinks it makes him look academic and intellectual is kind of funny. It’s all artifice and tomfoolery.

The show itself is a remarkably New York one. It’s nice to see a series actually shot in and around the city and not in Toronto for once. The characters are also recognizable to those of us who have been around for a while. Some a dying, old-school breed. Some just the mishmash of Brooklyn weirdos. Through it all, though, we have our three guys who are remarkably open and honest with their feelings about everything. Not in a whiny, emo way, mind you. But in an honest male way that undermines the machismo that so many are asked to project. And perhaps it’s the weed talking — and our characters definitely partake quite often — but their reliance and trust in each other is kind of beautiful. Despite the three of them being so different.

Watching it again ten years on, the series does feel particularly old fashioned. There are practically no actors of color, women generally fill secondary and tertiary roles and there is no mystery — aside from the occasional skateboard theft — to be solved. But as would be typical in this situation, there are also no explosions, no life-threatening bloodshed, no nudity and absolutely no dragons. There are no true business world machinations or superheroes. No bro code or extreme sports. Nope, it’s all very down-to-earth and, honestly, kind of touchy-feely in a way that you’d never expect a series staring three white dudes to be. Vulnerable. Yeah, that’s the word. They’re all vulnerable and aren’t afraid to express it. Which sounds awful, I’ll admit. But it’s couched in a comedy and not melodrama. So it’s all expressed in this writer-ish, New York way that makes it palatable, but also tasteful and artfully done. But also comedic.

Anyhow, I obviously have a soft spot for this overlooked series from the mid-whatevers. There’s something about it that hits both my literary and my TV-watching sensibilities and makes me wonder why there aren’t more of these series out there for consumers like me. I mean, probably because this was perennially low-rated and was unceremoniously canceled after three seasons. And it’s not like HBO is in the business to lose money. Even on what had to be a pretty cheap series to make, despite the Danson factor. And the multitude of awesome guest appearances. I say watch it and see if I’m completely off base with my assessment, but it’s one of the more underrated series of the new-ish millennium.