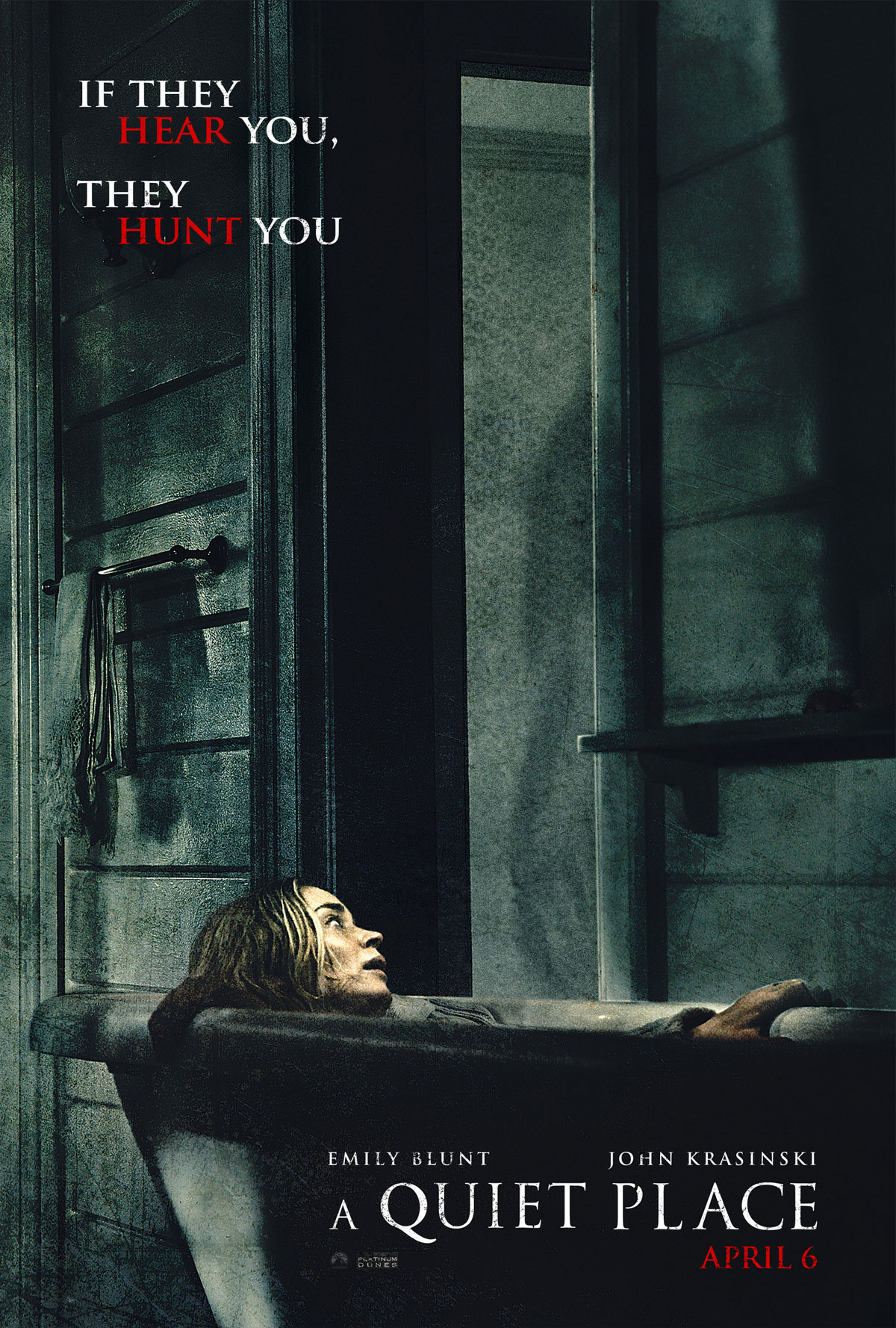 It’s always nice when they tell you right in the title what the movie is about. In this case, the world has actually become a quiet place. Or at least the corner of the world that we see. And as it is, it’s a very, very small corner of a corner of Duchess County New York, a couple hours north of New York City. And only seven — no, four — people seemingly live there. Oh, and then five. And some aliens. Some blind-ass, all-hearing aliens.

So in this post-apocalyptic world, there is nothing to do but shut the fuck up. Don’t speak, don’t stomp, don’t play Uno. Nothing. Just sit around and read or sleep or do it really, really quietly (which seems to be what our protagonists do, considering one of them is pregnant). In order to dampen the noise our characters even go barefoot outside — which seems really extreme and kind of silly — and the father, Lee (Krasinksi), even lays down sand on the fields and roads to soften their footfalls in the area surrounding the old, Victorian farmhouse in which they live. These aliens have really sensitive hearing, but only sometimes. And when it’s least convenient, they attack when any noise that the director, John Krasinski, determines is worth them attacking occurs. It’s a little unclear why they attack, however. These aliens that sometimes look spider-like and other times look like something out of Signs or that face-expanding thing from Stranger Things, just seem to like to stab people and move on. They don’t like eat them or lay eggs in them or do anything else most creatures from other planets like to do in movies and television shows that we’ve seen before. They’re just homicidal stabby things that hate the hell out of talking and banging.

So, how, you ask has the Abbott family managed to survive where the rest of the world has succumb to needing to talk or bang? Well, they have a deaf daughter, of course. So they know sign language and, uh, the father is an engineer, which makes him, uh, a survivalist? Yeah, again, I’m not so sure this makes a whole lot of sense. Also, if he’s such a survivalist, why would you move to an old-ass house in the middle of nowhere that’s surrounded by corn fields so that you can’t see these things coming at you? Why not move into a high rise building in NYC? Or at least a place with some modern doors, windows and locks? Eighty floors up with double-paned windows, I don’t think those things would be hearing you playing some Limp Bizkit and getting funky with it. And, yes, you’d have to go outside to get groceries and stuff, but the isolated location in the middle of high vegetation seems like one of the worst places one could be.

I have to say that having so much quiet in any modern film kind of felt miraculous. There are large sections of the movie that are practically soundless, or only employ ambient sounds. Sitting with a few other folks in a friends’ house, we weren’t quite sure how to react. Do we talk to each other? Do we just sit in utter silence watching Jim from The Office skulk around with his real-life wife, Emily Blunt? Otherwise we get to see both Krasinski and Blunt put on sad faces and scared faces and prepare ourselves for lots of jump scares. I wouldn’t call the movie scary per se. Nor would I say it’s completely coherent. But it’s definitely an interesting try at a genre film that takes the familiar, adds a little bit of a twist and at least commits to the bit.