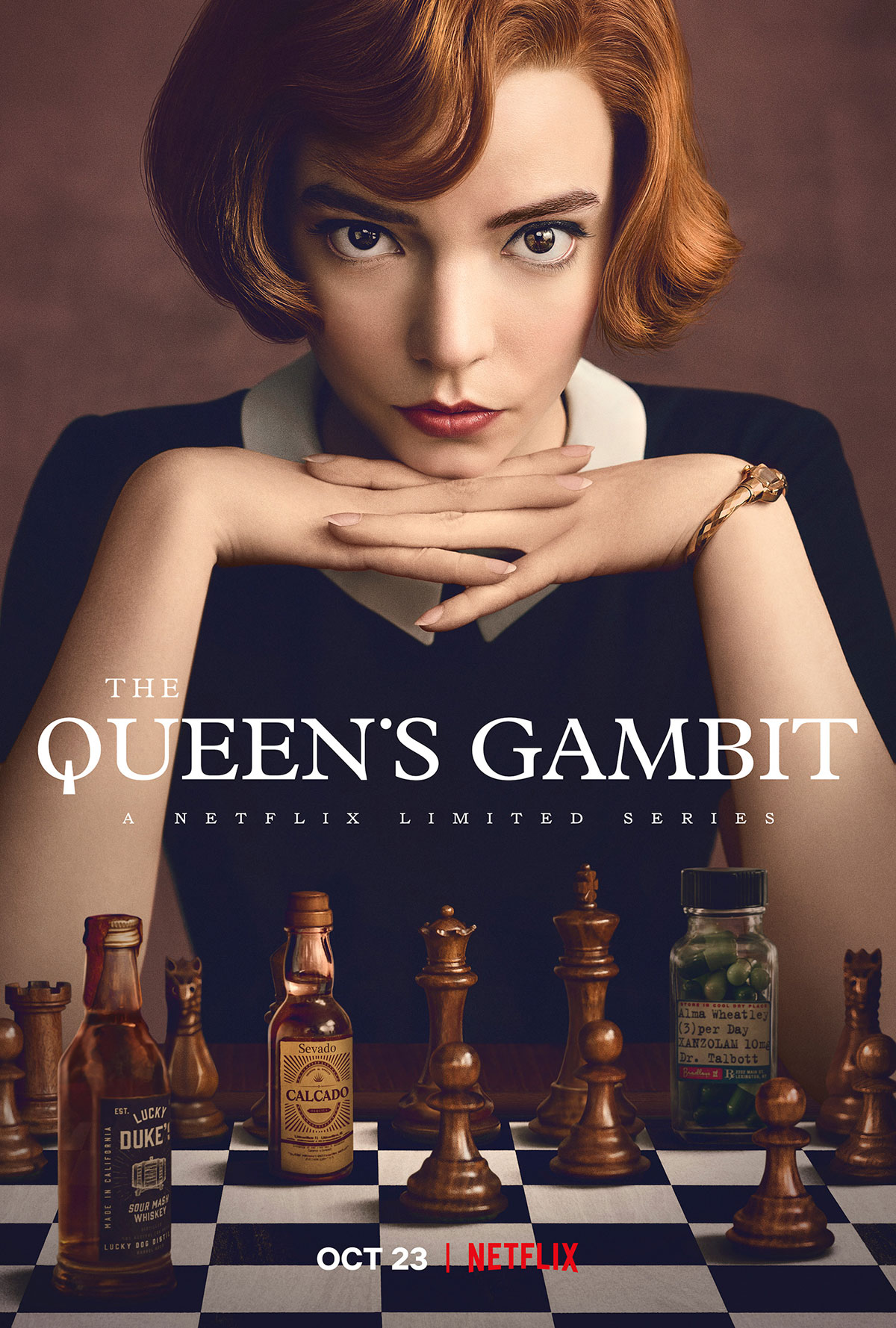 I’ve never learned how to play chess. So I had no idea when I first heard about The Queen’s Gambit that it had anything to do with this, uh, sport. Granted, I’m not certain the casual player knows the names of these chess strategies either. I thought it was another The Crown or Diana conspiracy show or something. And, let me tell, I was not interested. I so don’t care about royalty, or at least haven’t since King Arthur. So, I was pretty excited that it had nothing to do with a bunch of jut-jaw Habsburgs and had everything to do with knights and bishops and the horse things. No. No, I wasn’t.

As luck would have it, you don’t really need to know a thing about chess to enjoy this show. I imagine it would help, but I honestly have no clue if what they were doing during their matches was in any way realistic. It could have been the chess version of Rocky: all haymakers with no dancing, jabbing or clutching like a real match. Shit, maybe most games end in draws like tic-tac-toe? No idea. But I would think that knowing some of these strategies — or even how the pieces can move — would add some color/nuance to the scenes. But, like I said, it’s not critical.

What is critical is that you come into this series with an open mind. It’s atypical in a lot of ways. Which, to me, is terrific. But if you come in expecting the same gloom and doom of peak TV, or the formulaic hoorah of mainstream network TV, you’re going to end up confused. Or disappointed, more likely. Because this thing does get a little bit dark at times — the lead character, Beth Harmon (Anya Taylor-Joy), does become addicted to a Xanax type drug after being fed the narcotic as a child in an orphanage — but it is ultimately a triumphant tale of a person who is rightfully self-assured about her area of expertise. It never really does that thing where it takes her through the nine circles of hell to come out the other end. It doesn’t torture our main character to make her “earn” it like it seems every show needs to do these days. She has the trials and tribulations that any professional might have in his/her career, but she is competent from minute one and remains so through to the end.

But what will make or break your level of enjoyment of The Queen’s Gambit is Taylor-Joy’s performance and how you feel about it. I’m not even certain if it’s divisive in any way, but her character and her portrayal are certainly peculiar. Everything from her specifically fake-looking red hair, to her evolving period wardrobe, to that face that is almost impossible to look away from, she has this push and pull of being an incredibly engaging actress playing a weirdly distant character. A distant character, who at the same time is incredibly understanding and non-judgemental about others’ character flaws. Mostly those of her self-absorbed, alcoholic adoptive mother (Marielle Heller), who has no idea how to love and every idea how to keep herself in booze money. Essentially the Beth character, in her strangeness, has a pretty flat arc. It’s not like she zigs when you expect her to zag, but rather she just kind of continues on her trajectory toward being the best chess player in the world while the world around her can’t seem to throw her off her line. You expect her to spiral, but she doesn’t. You’d expect some superfluous drama, but there isn’t any. And, you know what? It feels different. It feels good.

Otherwise, the show is amazing looking. The period details and the cinematography and the whole thing. There are some weird sets on occasion, including Benny Watts’ (Thomas Brodie-Sangster) weird subterranean NYC apartment that makes absolutely no sense and looks like no other NYC apartment ever, but even the strange stuff adds to the surreal feel of the show. A show that almost feels like it lives inside Beth Harmon’s head. Like everything we’re seeing is kind of how Beth sees the world — which is obviously on a different plane than the rest of us.

And therein lies the brilliance of the series. It feels different. After many years of watching difficult men and damaged women, we have a difficult, damaged woman who is at once complicated, but also super-simple. She cares about chess. She admires chess. And people admire her. They are fascinated by her. They care about her. At its heart, the show is more nurturing and earnest in its treatment of its characters than the nihilistic, Machiavellian cynics we’re used to being asked to “root” for. We’re just so used to writers creating main characters we know we’re supposed to support because he/she is the show’s protagonist, but are constantly having our allegiances challenged when these same characters act horribly or commit unspeakable acts. This show gives us a break. It allows for this wonderful character who everyone — even her rivals  — can respect and want to come out on top to actually flourish.