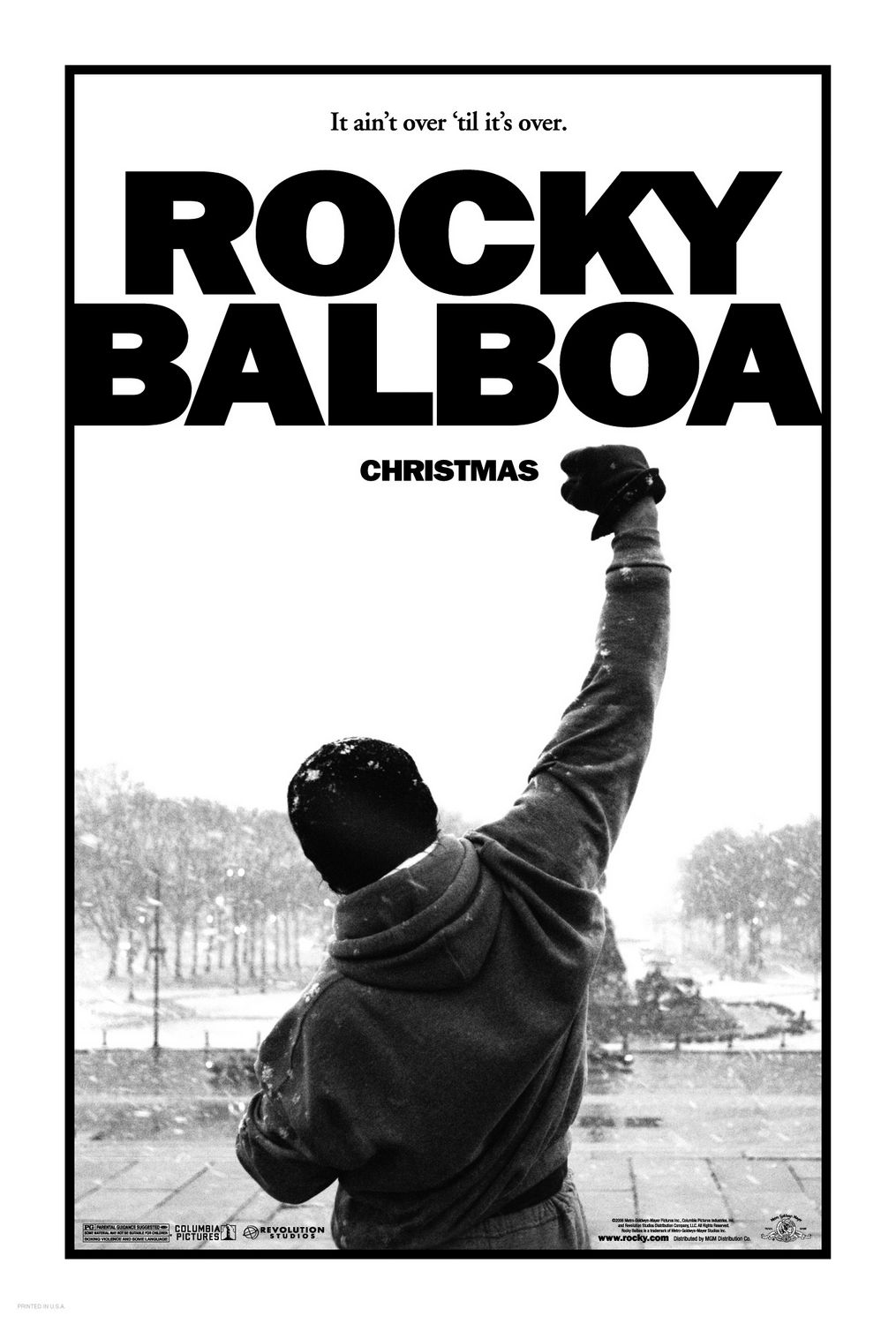 It seems that Sylvester Stallone took a page out of his own book here and went kind of back to the future. Like the first Rocky film, this is a low-key affair. It’s not all James Brown and quick cuts like Rocky III, IV and V. It’s almost, dare I say, a kind of humble movie. There’s only one actual fight in the entire movie and Rocky is back to wearing the dockworker cap and the fingerless gloves (without actually wearing them).

Just to get it out of the way, Sylvester Stallone looks weird. He seems to have muscles in his face that shouldn’t be there. His cheeks are taught and his forehead oddly smooth. This is presumably from a mixture of bad plastic surgery and steroids. The funny thing is that his odd appearance actually works in the context of the movie. If he was playing a politician or a cop or something, it would be really off-putting, but playing a punch-drunk ex-boxer whose boxing style was all about absorbing as many blows to the head as possible, it kind of works. What would otherwise be seen as Hollywood vanity here can be looked at as a guy who’s had his face broken by a millions fists over the years.

So now Rocky is several years out from his boxing career. Adrienne has died, his son has grown up and left the house for a corporate job in Philly, and Rocky is a restaurant owner. He’s still a local legend, and people come to his Italian restaurant as much for his little dog and pony show (he walks around the tables sharing old boxing stories) as the food. He’s still a very generous guy, employing folks who need help and feeding old boxing buddies at discounted rates. The restaurant seems to be reasonably nice and successful so I’m not sure why he lives in a kind of broken-down house and drives a crappy old van, but maybe it’s just to show his true humbleness–or his left over IRS woes from Rocky V.

Meanwhile, the boxing world is in turmoil. The heavyweight champ is widely despised because he only fights chumps and is relatively lackluster in the ring while collecting huge purses for his bouts. The problem, as people see it, is that there is just nobody out there to challenge him. Enter ESPN and their fake show where a computer simulates boxing matches between boxers who never got to actually fight. And, of course, they run a simulation between the current champ and Rocky Balboa. And, as we expect, the computer-Rocky wins. This drums up interest in the former champ and starts a “controversy” in the sporting community…

So here’s the current champ with a huge PR problem, and then there’s Rocky with nothing on his hands but time. Enter the promoters and their fancy idea of actually having the champ fight Rocky in an exhibition bout. Problem is, Rocky is like 70. Why would he want to do it? Well, because he feels he had unfinished business. He’s sad about the passing of his wife and his son’s embarrassment and indifference to his dad’s celebrity. The writing doesn’t do a great job of explaining exactly what it is Rocky feels is left unfinished, but whatever it is, he agrees to the fight. Queue the musical montage of him running and climbing the stairs and doing chin-ups on a rusty pipe in the back yard.

From there it’s pretty much as you’d expect, but this time there is no Talia Shire to come and hug him after the fight, and for some reason that just kind of left me just a little sad for the guy. I’m not sure what other rolls Stallone would be able to play these days, but he certainly has this one down. He plays an amazing kinda dumb guy with a big heart. He never breaks character and is in pretty damn good shape for his age (thanks in large part to cow hormones or whatever). I’m going to say with a pretty large degree of certitude that this is the last Rocky movie, though, so he’ll have to find some other lovable lump to play. And, please God, spare us Rambo V and Judge Dread II.