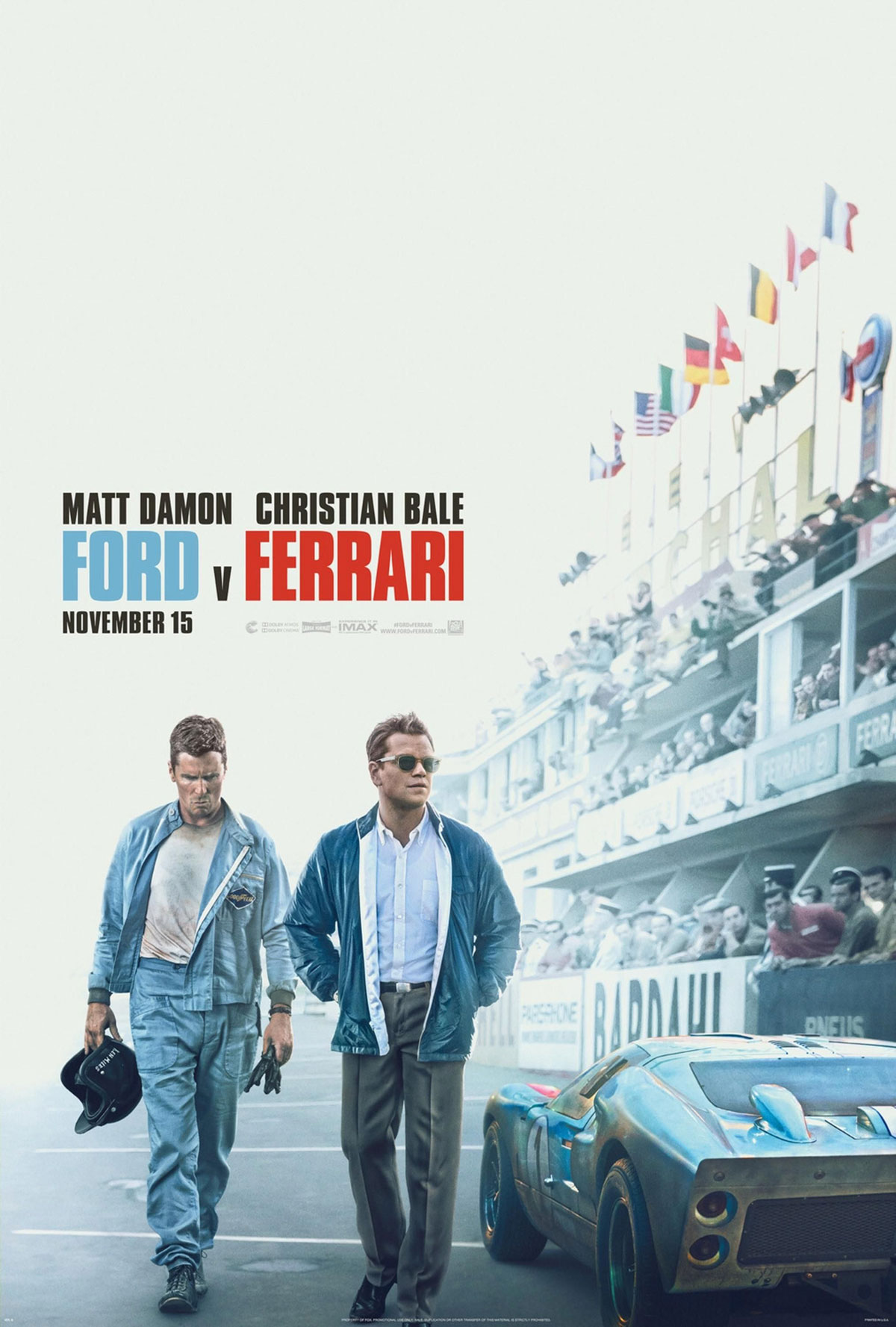 There are movies where the moviemaking overcomes the movie itself. In other words, the script or narrative may be lacking, but the sheer spectacle of the thing makes it a worthwhile watch. Such was the case with Ford v Ferrari and its scene after scene of screaming engines, tight curves and frantic action. Plus, having Matt Damon and Christian Bale play off one another doesn’t hurt.

Quick plot summary: It’s the 1960s and there’s this race called 24 Hours of Le Mans. Ferrari dominates the race with their sexy race cars. Ford really wants in, but they make boring cars for housewives and accountants. In order to get in the game, they offer to buy the struggling Ferarri company. Mr. Ferrari fucks them over and sells to Fiat instead of Ford. This pisses Henry Ford II off and he makes it his mission to beat their Italian asses. So he hires Carol Shelby (Matt Damon), a former Le Mans winner and the owner of a company that designs and builds sports cars, to build Ford a car that can beat Ferrari’s. He does, and hires the volatile British driver, Ken Miles (Christian Bale), to drive his car.

The movie becomes a struggle between Shelby and the Ford brass to both build the car he wants and get Miles as his core driver. And, of course, to build something fast enough to beat the Italians. In this you have the typical setup: the visionary maverick and wild man cowboy against the entrenched, immovable object. Sometimes the visionary and the cowboy are the same person, but sometimes it’s a Steve Jobs and Woz relationship, where you do have two sides of the coin. In this case, I suppose Shelby is Woz and Miles is Jobs, pushing the envelope and making everyone really damn nervous.

And of course if you’re going to have the “good guys,” you also need the bad guys. And while you’d think that would be the Ferrari dudes, you’d be wrong. We are introduced to the typical corporate douchebag dude, who is always second-guessing Shelby and trying to throw Miles off the race team. His name is Leo Beebe (Josh Lucas) and he is one of those characters that you’re supposed to hate because he’s just a PR hack, but he’s just an awful character in every way. Poorly written. Poorly acted. Almost ruinous to the film, but luckily, as I said, the fun of the racing overcomes this really, really lame character.

This whole plot point about the Ferrari purchase is kind of rushed in the narrative. Henry Ford II (Tracy Letts) is painted as a vain dolt who is easily manipulated by everyone around him. Insecure that he’s just the son of a genius (and a really giant racist and anti-Semitic piece of shit, btw) and not the man himself, he is motivated by an unknown insecurity to beat Ferarri in a way that doesn’t honestly make much sense. Despite it literally being the title of the movie. That aside, the focus of the film really swings predominantly onto Ken Miles. It wasn’t evident that this is the direction it was going to go, but he’s the only character in the film whose personal life we actually see. We see him and his wife. A ton of him and his son, Peter (Noah Jupe). And mostly his emotions and perspective throughout. Reading Shelby’s Wikipedia, they could have made a whole film about his life (and his seven marriages), but they eschewed any of his private life and stuck mostly to his relationship with Miles.

And because we focus so much on Miles, Bales’ performance becomes the most memorable part of the film. The guy is good. You buy him as a race car driver. You buy him as this family man who loves his wife and son and just wants to do what he can to better his life. There is quite a bit of Hollywood schmaltz in the writing of his character — especially his relationship with his son — but sometimes these big, loud Hollywood movies need that. And, to their credit, in a scene and situation when they could have swelled the music and gone for the huge emotional cheese, they avoided it and played it pretty straight. Other filmmakers probably wouldn’t have been able to resist, but director, James Mangold, did himself and all of us a favor by being super professional about it.

But, hell, let’s not fuck around here. The cars. They’re cool as hell. And watching them race around and hearing the insane sound production (even on the somewhat meager TV we were watching it on) was pretty incredible. And the shots inside the cabins and outside and through the window and over the shoulder. It has to be hard to think of new ways to shoot what amounts to a machine racing around in a circle, but they managed to keep it fresh and exciting. Even Hipster Jr. Jr. was out of her seat clapping when Miles won his first race. And keeping a 10 year old engaged for two and a half hours is almost as amazing a feat as winning the 24 Hours at Le Mans.