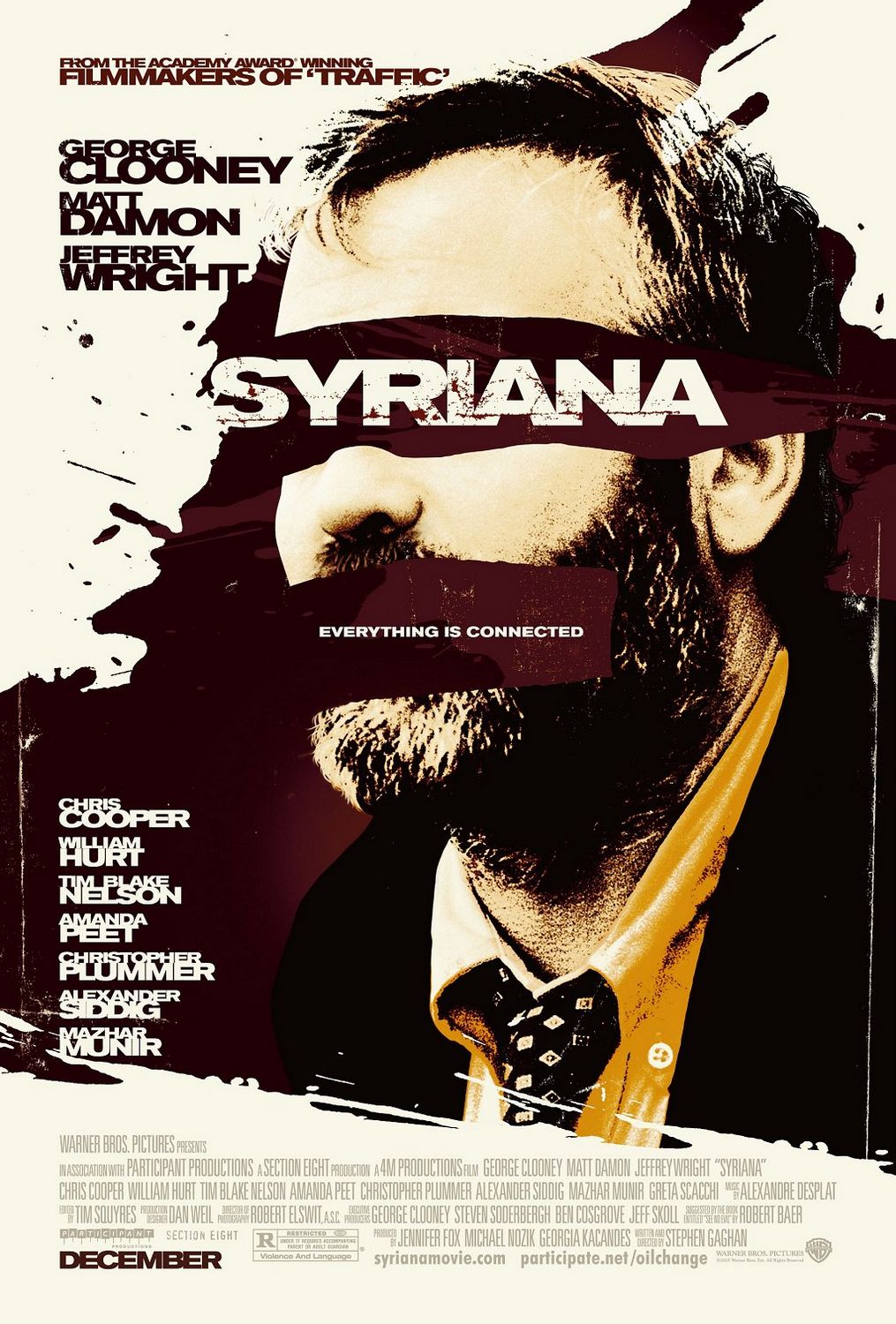 Every once in a while I need to see a serious film. I don’t mean serious in like a Sally-has-a-barfing-problem kind of way, but serious in that it has a true point of view and a message to convey. I also need to see films that don’t insult my intelligence and treat me as if I’m not smart enough to follow a Clifford pop-up book, let alone a fact-based political thriller. In a refreshing twist, Syriana throws a dense script at you and allows the viewer to sink or swim.

I saw this thing late in its theater run, and was warned ahead of time to pay very close attention. I did, and was rewarded with a wonderful script that managed to treat everyone not as caricatures but as flesh and blood people. They do all this while still showing us the inner workings of the oil business, the struggle for power and money in the Middle East and why people do what they do.

While there is a temptation to make the oilmen and shady American government officials evil, snarling dogs and the Islamic fundamentalists mentally deranged lunatics, the movie resists and shows their actions and motivations in the black and white context of fear and self-preservation. Nobody is righteous, nobody blameless and nobody pure evil. There are motivations behind every action, and often they’re the same on both sides. The ending message is a bit bleak, but that’s true life. Call it a cautionary tale–everyone who tries to break the cycle of insanity that is money and land and inside deals ends up a smoking crater in the pavement. The oil and money has a life of its own and is bigger than any one part and is the reason for everything that is happening in the region. As they say in the movie, without it they’d still be just a bunch of dudes in tents out in the middle of the desert, and American businessmen and their government cronies would be off somewhere else pressing their influence and flexing their muscles.

Adding to the immersive feel of the film was the gritty film style and spot-on acting. George Clooney has come a long way from Facts of Life, and is given free range here to not play George Clooney. While his range still hovers around some of the more dramatic ER episodes, he flashes his charisma (even 50 lbs. heavier) without the wink that is usually present in his performances. Matt Damon is actually a pretty underrated actor who always manages to convey an odd tension in his characters that is subtle but unsettling and effective. He’s not creepy in a Talented Mr. Ripley kind of way in this film, but is certainly a man fighting some serious internal battles. The rest of the cast is equally strong and shows what actors can really do when they know what they’re doing is good. If only there were more filmmaker out there willing to take that chance.