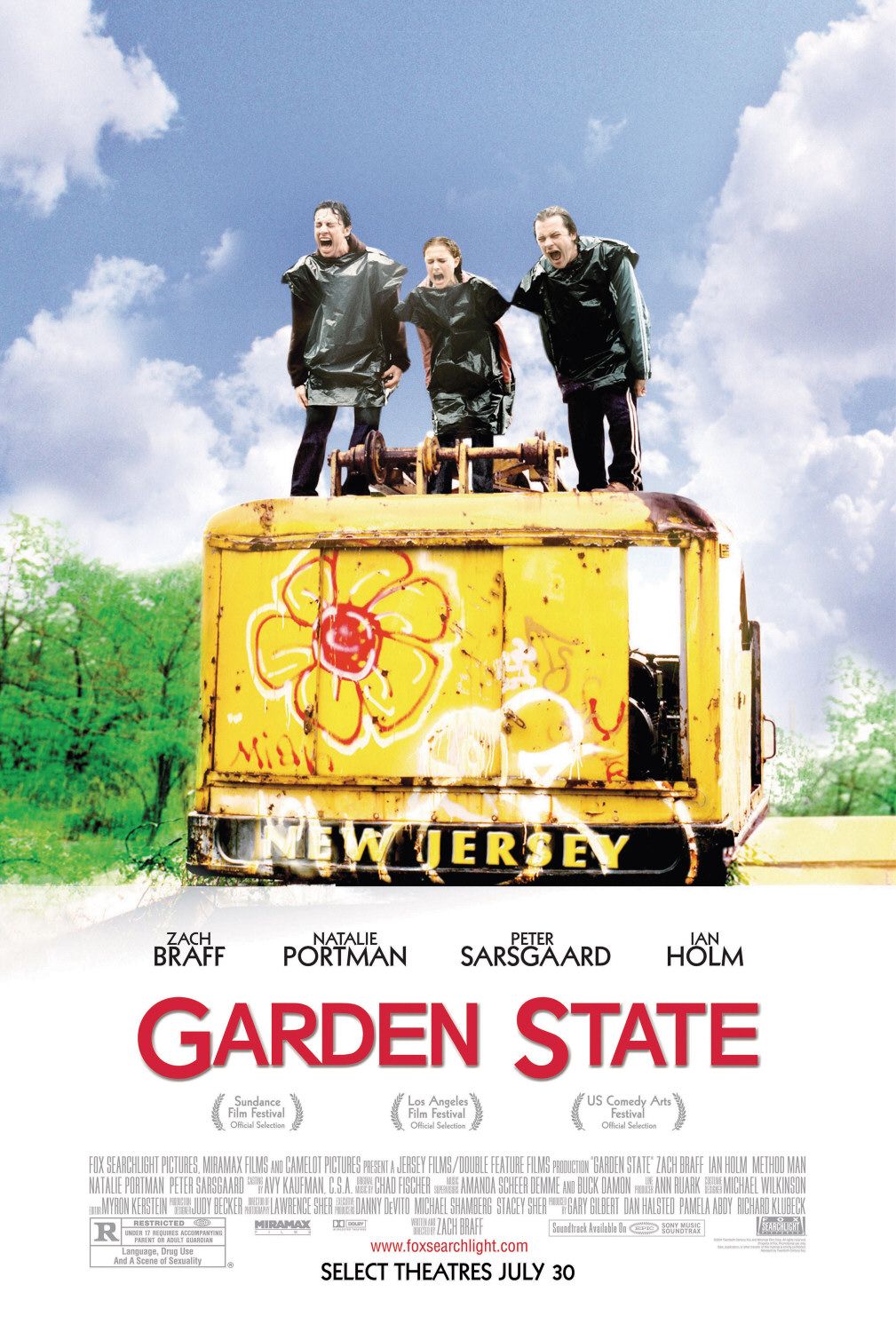 New Jersey takes a lot of flak. Sure its citizens drive like shit and portions of it stink of the same, but it certainly has its positive qualities as well. Honestly this movie could have been set just about anywhere, but the director/writer/Scrubs star, Zach Braff, happens to be from Jersey, so voila: Garden State. I honestly expected a little more NJ humor, but am glad he didn’t take any cheap shots or go for the easy laughs at the state’s expense (like I did above).

So, Garden State is a love story, albeit a slightly odd one. Mixed in with the love story is the undercurrent of family drama, finding oneself and mental illness. Ah, all the earmarks of a small, indie film. The gist of the story is that Andrew Largeman (Braff) grew up in Jersey, left at sixteen for reasons unknown, ends up in LA as an actor, and then has to return to NJ at twenty-eight to go to his estranged mother’s funeral.

Large, as he’s known to friends, hasn’t been back home in almost ten years, yet when he comes back all his high school friends are still are still in the neighborhood working odd jobs or, in one case, living in a mansion he bought after making millions inventing silent Velcro. We can see from Large’s demeanor that something is obviously wrong with him, and we learn later that he’s loaded up with anti-depressants and anti-psychotics. Ah, let the reawakening begin! And who better to shake him out of his stupor than a cute girl? Enter the seemingly free-wheeling, slightly wacky Sam (Natalie Portman). So what if she’s a little bit of a pathological liar and an epileptic? She can teach him how to live life on his own terms! So, we see where this is going, and it does.

There are a couple nice things that Braff does to avoid the cliche that this movie could so easily become. First, neither of them is dying (well, really dying anyway). They meet in a doctor’s office, and I got so scared right off the bat that this was going to be one of those Dying Young, Sweet November, Autumn in New York, Here on Earth, Six Weeks type movies where they share the time she has left, learn their life lessons, she dies, we cry, and his spirit is lifted by some keepsake she leaves him. Second, the characters go through their arcs, change somewhat, but don’t do the total 180 degree turn to make the pieces fit. Richard Gere, corporate raider turned hopeless romantic climbing the hooker’s fire escape this is not.

Of course the film is not without its first time writer/director pitfalls, which includes the three main characters climbing a structure in the rain and all letting out cathartic yells as they are drenched. Also included is the ever popular group night swimming scene, a dude shooting flaming arrows into the sky for no reason (very reminiscent of the aerosol flamethrower scene in St. Elmo’s Fire) and the very overused boarding a plane and having to make the decision to stay or go scene. But I’m just being nit-picky.

The film is very talky, which isn’t necessarily a bad thing (unless it’s Before Sunrise, in which case it makes me want to kill myself trying to decipher what French-accented Delpy and mumbling Hawke are trying to say both figuratively and literally) if the characters have something good to say. I’d call this movie more quirky than funny, (and sometimes it seems he tries a little too hard with the quirkiness) but overall the characters are well done, the acting decent, the subject matter relevant and universal, and the film ultimately satisfying. Check out the DVD extras if you can and see how this thing could have really veered horribly into maudlin melodrama.