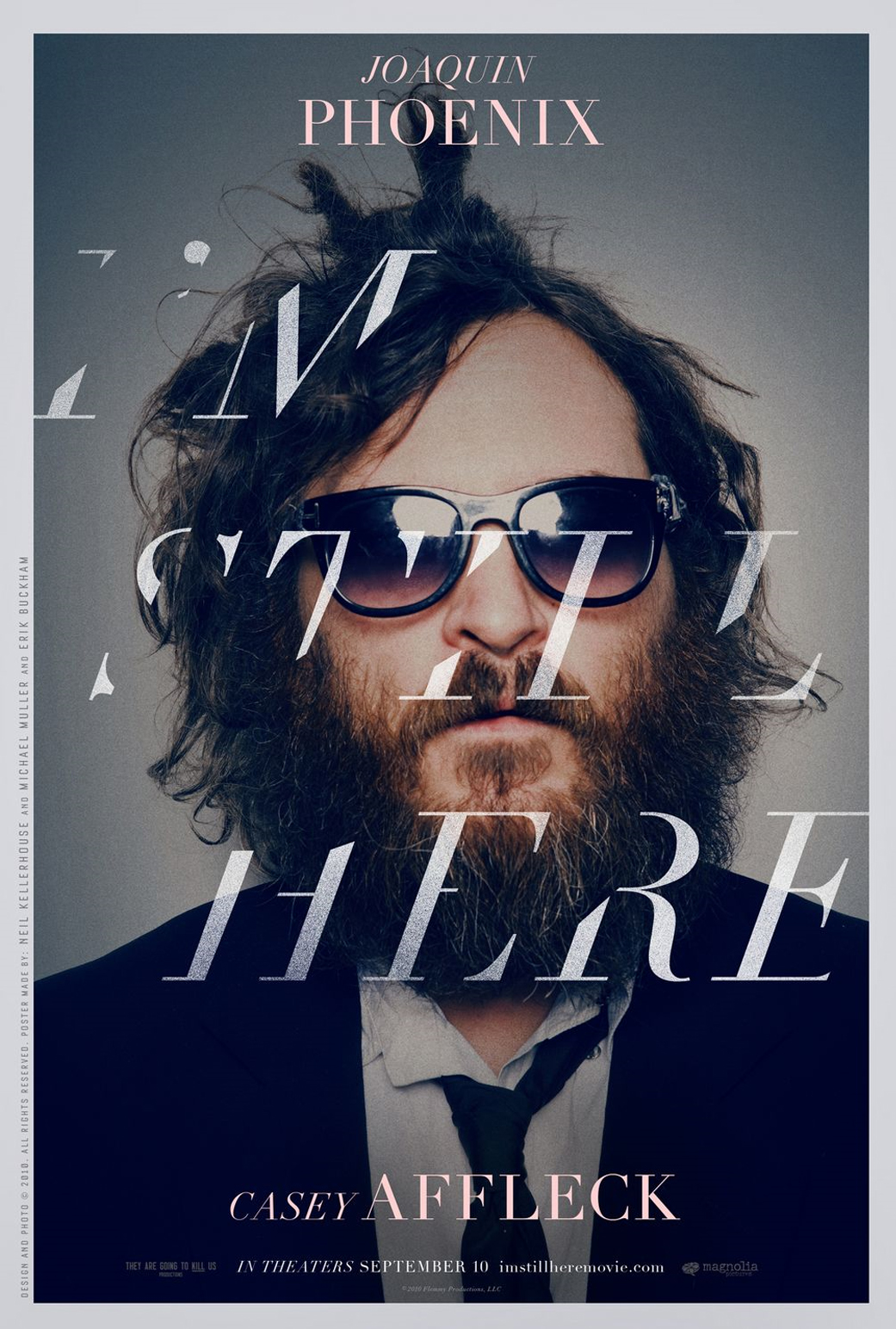 I’m still here, but my career may not be. Bwahaha, I’m certainly not the first asshole to make that joke. But, seriously, there is such a thing as a too much exposure. And, after watching this film, I certainly felt like I was exposed to too much of Joaquin Phoenix.

If you have an interest in watching Joaquin cry, Joaquin snort, Joaquin poop, Joaquin have sex with hookers, Joaquin self-destruct over and over again, boy is this movie for you. If you’ve had enough of celebrities behaving badly for real, then you may want to go rent The Parent Trap (the remake, not the original) and remember a more innocent day.

As a movie, this thing is painfully bad. As a curiosity, social experiment and pure trainwreck of an art piece, it’s interesting on all sorts of levels. I mean, it’s pretty well documented at this point that this thing is neither a documentary as it is sold, nor is it non-fiction, unscripted or without a script. It’s not to say that Joaquin may exhibit some of the crazy-ass qualities he displays in the movie and out in public leading up to the film, but like Andy Kaufman, crazy and performance art is a fine line to walk. Considering our addiction to celeb gossip and scandal, this film both got its content and marketed itself as a must-watch in the same breadth. His famous hysterical-pitiful appearance on Letterman set the blogosphere and Entertainment Tonights of the world on fire. All an elaborate ruse in retrospect, but at the time it created a central point in the film and resonated with people at the time as we watched the unraveling of one of the greatest actors of his generation. And now in the film we see the supposed effect it had on him and the cascading hole it sent him down!

The whole issue here, though, is that it’s all a lie. And the lie is somewhat absurd when you really consider it. I mean the whole hip-hop thing is too jokey, too weird, too clearly false. And the dramatic decline is too precipitous. If Casey Affleck and friends had aimed a little lower and tamped down just a little of the craziness and not targeted the rap thing, they may have had a more convincing breakdown on their hands. Of course if the thing hung together a little better and didn’t ramble much in the way his character does, I may have been compelled to be more lenient with my negative opinions, but as it stands, there is little beyond the pure curiosity factor and prurient shitshow to hold one’s interest. The baptismal end of the film is an interesting denouement and clearly signals the fact that what we’ve been watching is not in fact a spontaneous crazyfication of the former actor know as Leaf Phoenix but the attempt of a young filmmaker and his friends to create something genre-altering and news worthy. They half succeeded, I suppose, and created some of the buzz they were looking for, but ultimately failed to make a film many beyond the morbidly masochistic would really want to sit down and watch.