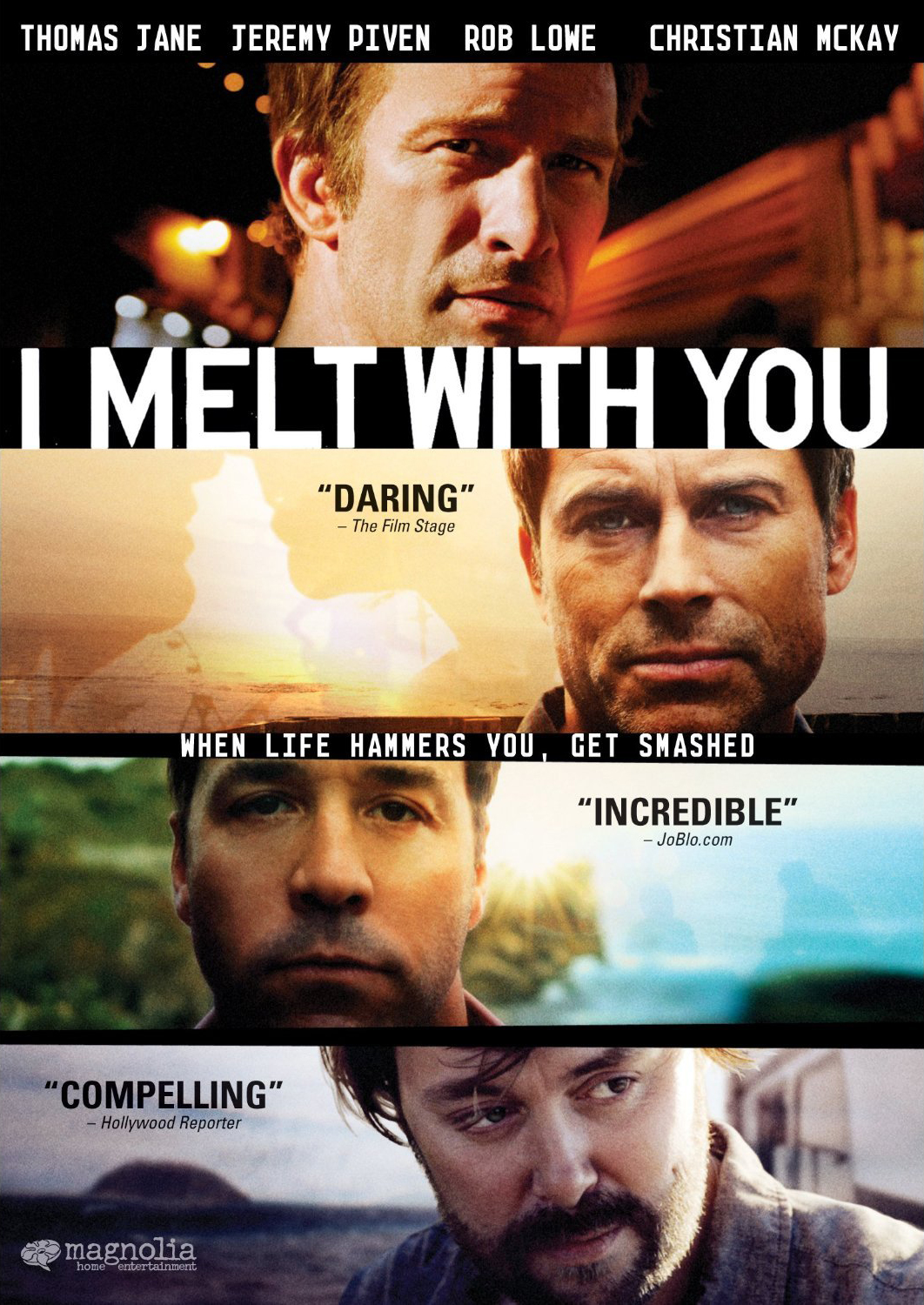 I Melt With You

Here was the ten-word pitch to the movie studio for this film: handsome actors in Big Sur house hug, snort and die. And that pretty much tells the story in a nutshell. Though there is a little more snorting than hugging and a little more hugging than dying. But you get the picture.

The question I have (and, trust me- I have plenty) is what freshman film student’s computer they stole this script off of? Seriously, from start to finish this felt like something I’d envision being cool when I was 17 or 18. Luckily for me and the rest of the world, I was never allowed to write and sell a script to Hollywood and pack my film with known actors. But someone somewhere greenlit this film, which felt more like a jettisoned youthful indiscretion than something that was meant to see the light of day. Almost like Mark Pellington (whom I once saw piss on a trash can in a subway station — true story) dug into his drawer of failed ideas and just tossed this one out there on a dare. How else to explain the stunning lack of plot, the extended music-video-like scenes (duh) of our guys crushing up pills, drinking Scotch and piling coke on tables like they were Tony Montana? Honestly, most of the movie is shot in slo-mo with lights coming from below and above like the fucking “Jeremy” video. It’s not to say Pellington doesn’t make beautiful music videos, but to sustain that for two hours is just silly.

Two hours of endless scenes of debauchery and adult male crying and bro circles, all tied together by a completely asinine strand of a plot arc. All leading to the “big reveal” — after which I actually found myself laughing out loud at its implausibility and stupidity. See, you have what seems like four successful dudes, all of whom, despite the copious amount of drugs and booze imbibed during their week, seem relatively stable in their own rights. One is a published author, another a doctor and another a rich financial type. The fourth seems to have had a rougher life, but his friends are there to support him. They are childhood/college friends (now in their mid-forties) who get together once a year to get really, really high. To escape their lives and just party like they did when they were young and irresponsible. But, guess what, their lives are not as rosy as they seem. Gasp. All of them are actually miserable dudes. And as the week progresses this comes out one by one and they hug it out (ironically with Jeremy Piven, whose character Ari Gold gave us thy term.) And then they do more drugs and shit gets worse and worse. And so does the dialogue. Guys sharing. Real awkward. And then the reveal. The denouement. The consequence of lives lead in misery – though some of the misery seemed completely invented. The reveal that calls up an old oath. An oath taken from what seems like a direct rip from a Who song. An oath absolutely so fucking stupid that even if you liked any of the movie before – what with the drugging and drinking and nonsense – then this would make you moan worse than the freeze-frame John Bender shot at the end of The Breakfast Club.

I’m honestly not sure what the hell they were going for here, other than Pellington getting to spend a few weeks in Big Sur (which is pretty damn awesome, truth be told), but to think that these poor actors had to face their families after making this absolute trainwreck of a movie makes me feel just a little bit bad for none of them. Unless, of course, someone somewhere has some sort of dirt on them. There’s no other explanation — other than they were fooled by the 80s song title rip off into thinking this might actually be cool. [On Demand, MF]