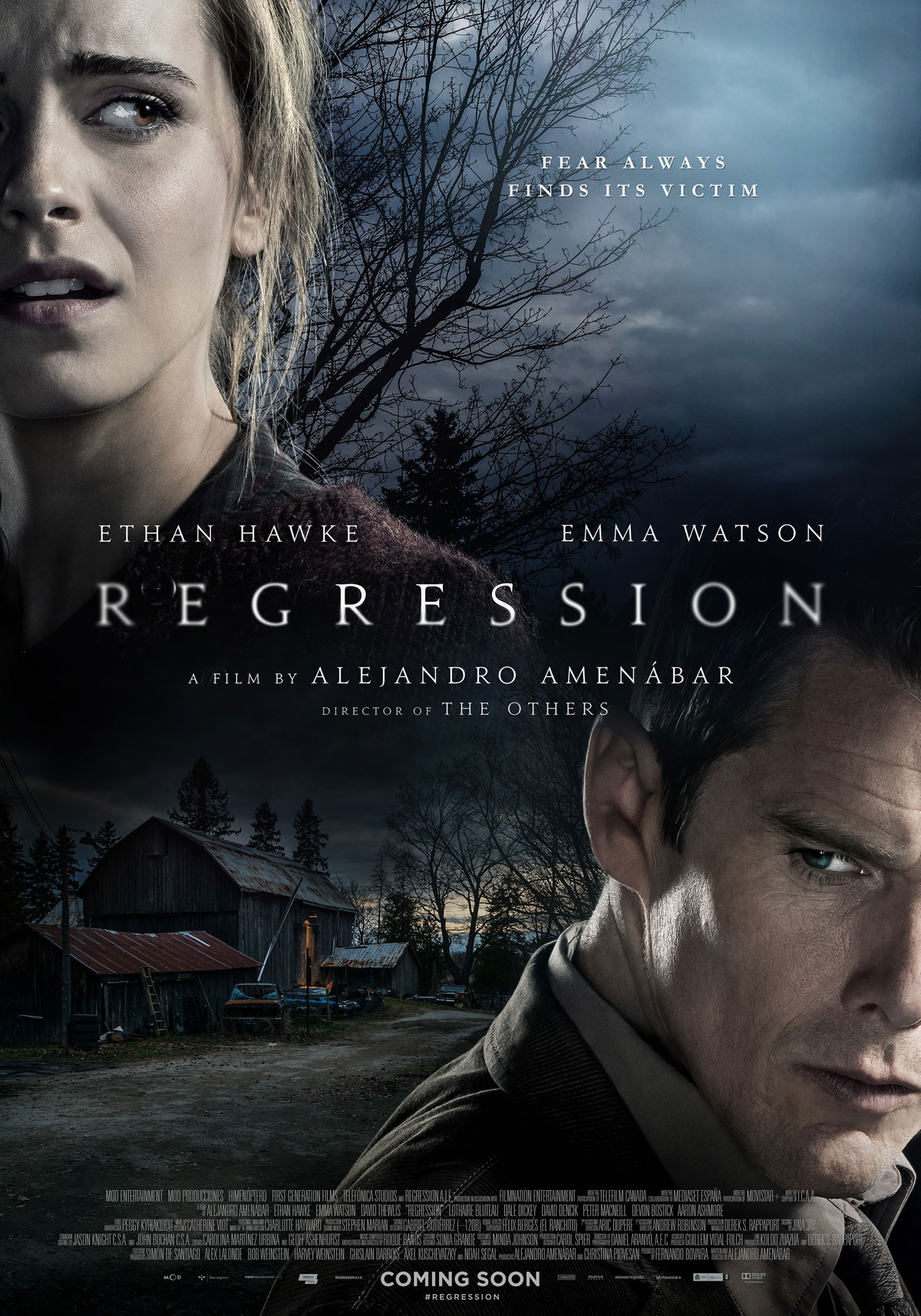 On the surface you’d think Regression might be good. You look at the poster and you see the Gen X critical darling of the moment-ish, Ethan Hawke, and young-ish Harry Potter alum, Emma Watson. In a film directed by Alejandro Amenábar, whom I somehow confused with Alfonso Cuarón or Guillermo del Toro. Or maybe it was Pedro Almodóvar. And not the dude who directed The Others and pretty much nothing else. My stupid, casual ignorance strikes again! Point is, I read the cover, judged it and now realize that that saying cuts both ways.

What I didn’t realize is that this film takes place in 1990. And that it’s set during that era to trade on the whole satanic panic, ritual abuse thing of the eighties and early nineties. There’s a cheesy title card at the beginning and end of the film telling us as much. Thanks, dudes. It’s as if they were like, a lot of this type of stuff happened back then, and here’s one that totally didn’t happen, but totally could have! So it’s based on a possible true story that possibly maybe could have happened, but didn’t as far as we know. Way to commit.

Watson’s character, Angela, is a seventeen year old in Minnesota. She has a creepy dad who turns himself in to police for sexually abusing her. But has no actual recollection of doing it. Bruce Kenner (confusingly not Bruce Jenner), played by Hawke, is the detective put on the case. For some completely fabricated and nonsensical reason, this podunk police precinct also employs a British therapist/professor (David Thewlis) who happens to have an expertise in regression therapy. He’s so incredibly out of place in this town, in this police station and in this movie, it’s insane. Or absurd. But he hypnotizes people and they seem to recall not the father abusing anyone, but a band of satanists. In the barn of Angela’s house. In hoods. With like baby sacrifice and shit.

All the stories of satan worship start to get to Bruce and he starts to have panic attacks and shit. And clearly everyone is having some weird case of mass hysteria based merely on some foggy recollections that are clearly disconnected from reality because there’s no proof of any of it. Bruce is sucked into it and basically shows us that he’s a garbage investigator, a pretty unstable human being and a little bit of a pedo if I’m being honest. I’m not certain that’s what we’re supposed to take from it, but that’s the end result. Filmed in this warped fashion that feels oddly amateurish. The whole thing builds slowly and boringly to a twist that isn’t a twist and then just kind of fizzles to the end with the aforementioned title card. Roll the credits and queue the yawns.

The whole film is dark and feels remarkably not American, despite ostensibly being about a very American phenomenon. Hawke’s character is confusing to say the least, but not as confusing as Thewlis’. The twist feels very of the time in a Body Heat or Basic Instinct kind of way. Like if someone on twitter who is way smarter than me on these things did a deep dive on the morality, misogyny and victim-blaming wrapped up in it, they could have a field day. In fact, the whole end of the film literally stands the satanic panic cases on their head and misses the point completely. Yeah, man, those McMartin Preschoolers really manipulated those adults’ memories in order to get them fired for ritualistic child abuse. Yeah, that’s not what happened in real life.