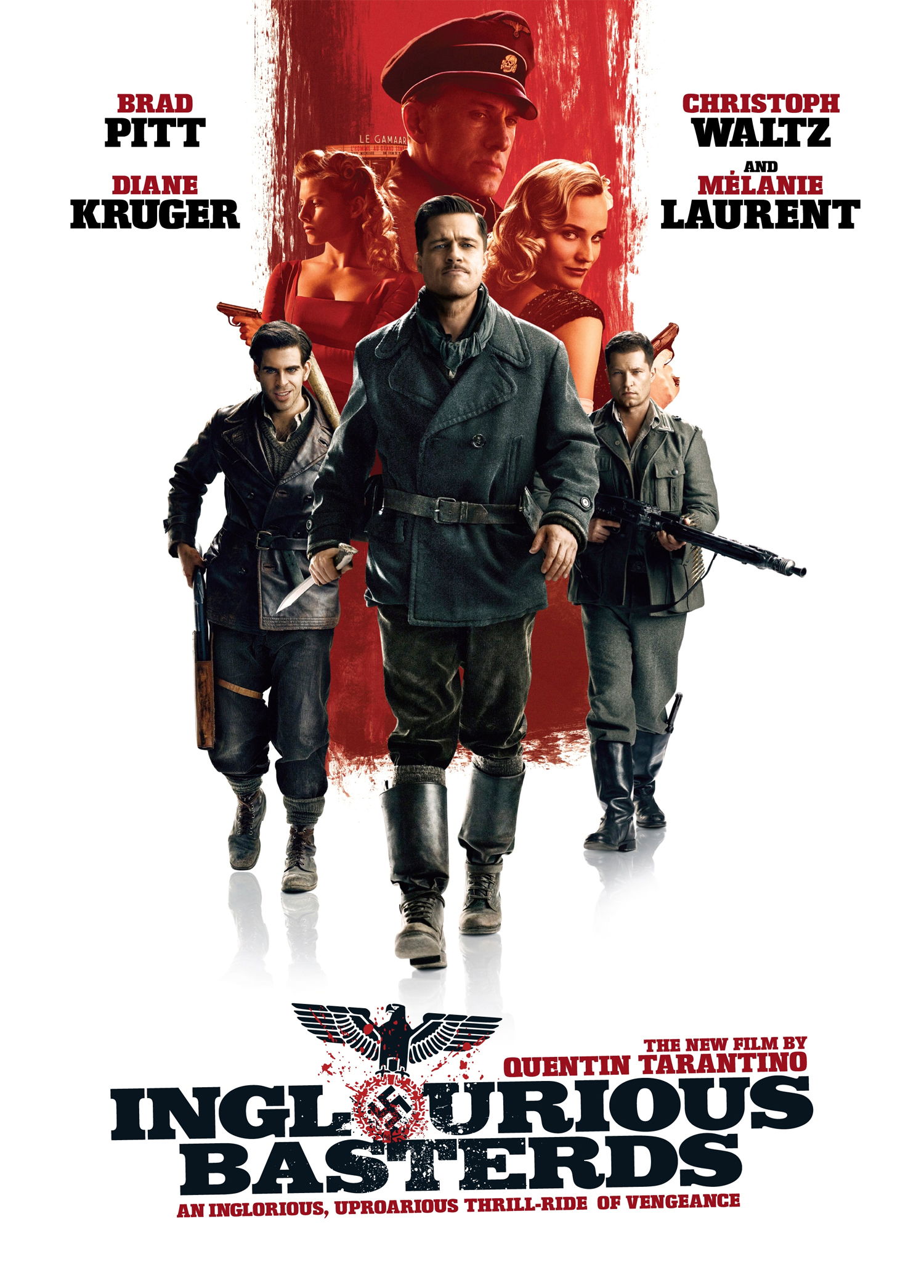 I’m no Tarantino sympathizer. Sure, Pulp Fiction is like one of the best movies ever made, and his writing in True Romance is brilliant beyond words, But I’ve honestly been less smitten with his work since, say, Jackie Brown. In fact, I didn’t even bother seeing the Grindhouse stuff because if critics said that hack Rodriquez’s film was better than Tarantino’s, then his must have really sucked. And then I saw the preview for this film. Boy, I thought, he’s now doing some sort of oblong Coen Brothers goofball shit (whose non-goofball stuff I love). Perhaps it was seeing the debacle Burn After Reading (prime example of their horrendous stuff) and then seeing Brad Pitt in his Basterds role that made me think that way.

As it turns out, this film was more like a hybrid between a Tarantino film and the more focused of the Coen Brothers’ efforts like Fargo or Barton Fink. It always helps to pick a completely unsympathetic bad guy. In this case it’s the Nazis. They have very few people boo-hooing their demise. Of course QT is the master of walking that line between sympathizing with his killers and ultimately giving them their just desserts. The baddest of the baddies (aside from Mr. Hitler himself) in this film is a German officer nicknamed “The Jew Hunter.” Named that because, well, he hunts Jews. And this guy is good. He is a detective of the highest order. The actor portraying him also steals every scene he’s in. The guy is creepy, scary and funny all at the same time. But unlike say, some of the Coen Brothers more slap-sticky stuff, he’s never portrayed as a buffoon an ignoramus or really turned into anything other than a shit-talking but cunning Nazi. Serious roll of a lifetime for this heretofore unheard of actor (at least unheard of by me).

Battling the Jew Hunter and his ilk are The Basterds, a group of American Jews (and one rogue Nazi) led by a Southern talkin’ Brad Pitt. Their job is to go through France killing and scalping as many Nazis as possible. No prisoner taking, no mercy. They are efficient at their jobs, working their way through the French countryside torturing Nazis for info, killing and scalping and building their lore amongst the Germans. There is no shortage of gore here, of course, but it, like a lot of QT’s gore is a little cartoonish in quality. Meanwhile we have another fork of the narrative involving a movie theater owner in a French town who has a secret past and is being pursued (in an amorous way) by one of Germany’s most famous war heroes. She, like the Basterds, has similar motivations and somehow wrangles it so the entire Nazi hierarchy is to attend a film premier in her theater! Wackiness and self-referential film history knowledge ensue.

This isn’t the kind of movie you just throw on in the background, mind you. It’s not as twisty and turny as most Tarantino films, but much of the dialogue is in French and German, so you have to decipher not only what’s happening, but read while doing it. It’s a revenge fantasy of the highest order and about as historically accurate as History of the World: Part I, but it has ties to the modern world and is oddly supportive in a weird way of the Al Qaeda insurgency in Iraq–though I’m probably projecting. Granted, like most Tarantino movies there are a couple good guys who are all good, a couple bad guys who are all bad and then a whole shitload of folks who are all shades of ambiguous. In this one it’s a little more clear who one should be rooting for, of course, but by making The Basterds’ tactics terroristic, brutal and unflinching he in some ways creates that ambiguity when they do run up against examples of brave German soldiers who are willing to die for country and do the right thing. Though, in the end, his intention is most likely to entertain the audience and give the Jews that revenge on celluloid, after hundreds of years of being history’s punching bag, that they couldn’t have in life. Film fiction: history’s great equalizer. Thanks, dude.