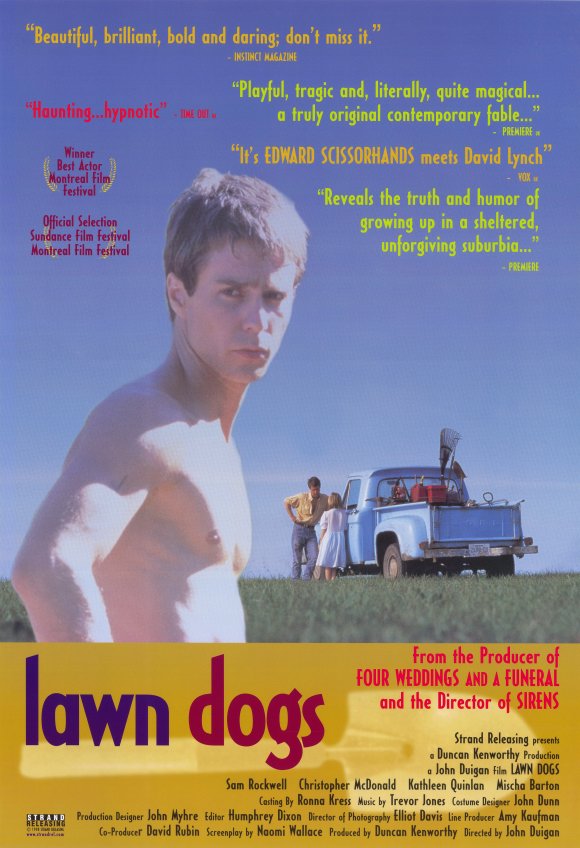 The creepiest thing about this movie is the fact that it stars the little dead girl from under the bed in The Sixth Sense. Despite the presence of this huge star, this flick is indie to the bone. This means every character is a total oddball, everybody has a story to tell and somebody ends up getting shot. Why guns always play a huge role in the end of so many indie films is beyond me, but I’ve already gotten into that in a few of my other reviews.

Anyway, this film is beautiful to look at, with some scenes that seem ridiculous at first sight, but somehow burn an impression into your brain. One scene in particular in which the main little girl climbs a tree, tying red ribbons on all the branches, while the wind blows gently, is a stand out. The plot is thin (as is the case with a lot of these films) but acts more like a character study focusing on the relationship between the daughter of an affluent family (Mischa Barton) and the troubled town greaseball (Sam Rockwell), who lives on the outskirts of town in a trailer and mows all the rich family’s lawns (thus Lawn Dogs).

The little girl is a loner who has had heart surgery and therefore can’t really exert too much energy, is overly protected by her parents and is a general weirdo. She displays this by peeing on her parent’s car and various other acts of general strangeness. Her parents (Chris McDonald — Shooter McGavin from Happy Gilmore — and Kathleen Quinlan) have secrets of their own, as infidelity abounds in this Stepford-like, sweater-around-the-neck kind of town in some affluent Kentucky suburb. So this little girl realizes that the only real person around is Rockwell, the guy who mows her lawn. She clings to him and wants to be his friend. He isn’t used to anybody wanting to be his friend, much less addressing him like a human being, so he rejects her advances at first (but eventually gives in to being her buddy).

Meanwhile, he is taunted by the wastoid sons of the rich families, security guards and everybody else in town. And is inevitably accused of having an improper relationship with the little girl, while he actually is sleeping with some of the rich town women, who obviously aren’t satisfied with their antiseptic lives. Rockwell acts mostly with his face, looking as if he lives mostly on cigarettes and an occasional Bud. There are some killer lines in the film, but the dialogue is subdued for the most part. The pacing is slow and dreamlike, but sometimes this is interesting to see in a film, with all the car chases and special effects going on these days.

It’s an odd film, really, but enjoyable at the same time. It definitely fits in the low-budget movie mold, but is just original enough to keep your attention. There’s also a nude scene with Angie Harmon, of that’s not enough of a motivating factor, I guess. Despite the gunplay at the end, the director pulls one out of his hat and does something weird and magical. You’ll just have to see it to understand.