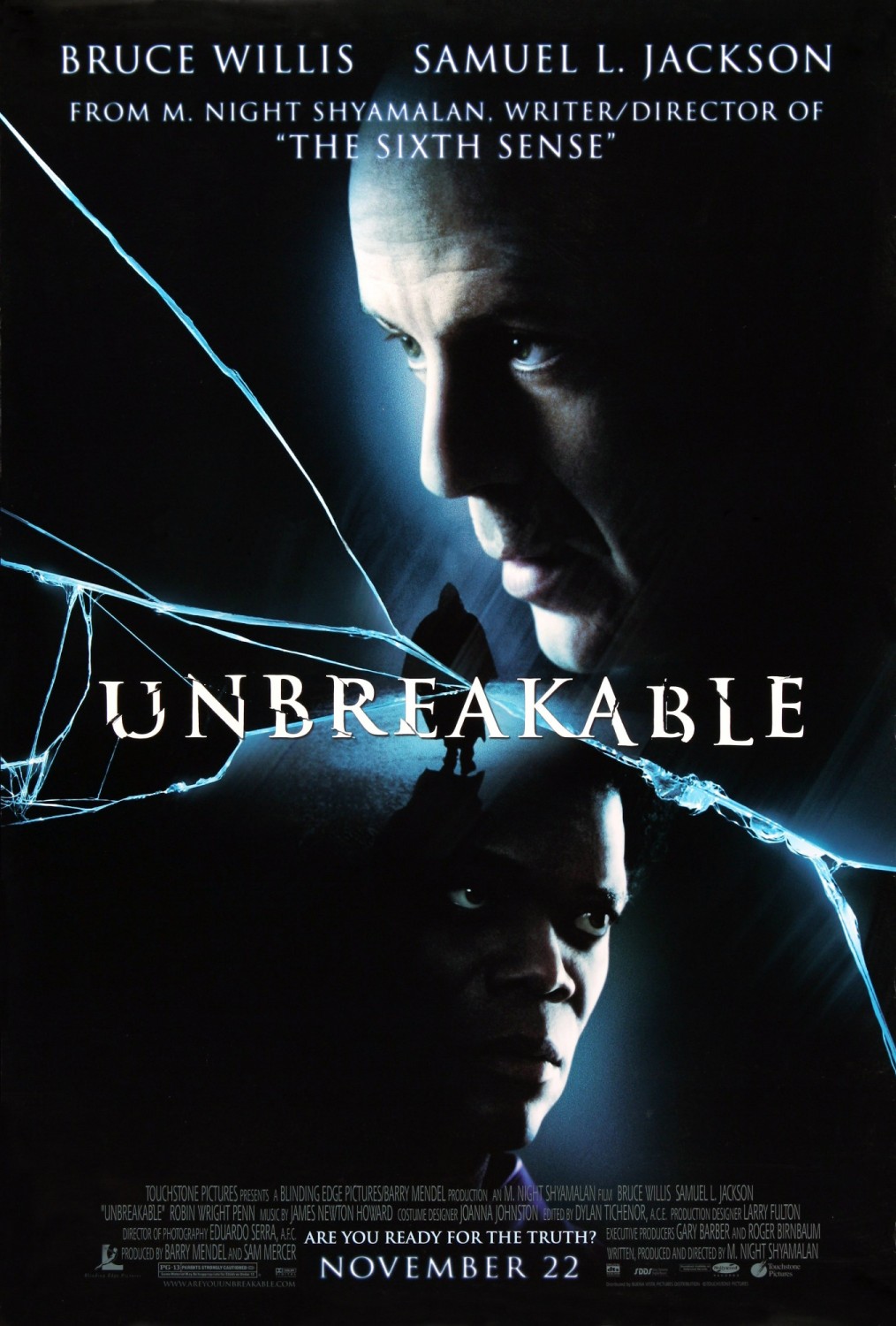 Try as I might, I can’t pronounce M.’s last name. Maybe I’m a stooge. Maybe I’m clueless. Maybe all the people who complained that this movie sucked are the true idiots. I think people were just looking to hate this film after M.’s unprecedented success with The Sixth Sense. After all, the guy is cocky. The guy is rich. He made a mediocre ghost movie into a three hundred million dollar blockbuster. When it’s all said and done, Unbreakable is a better movie. The characters are more interesting. The plot is better. The situation is more complex. Sure, M. tried to recreate the success by casting Bruce Willis and a Haley Joel Osment look-alike in Spencer Treat Clark. He set it in the same city and gave the movie very similar pacing. He gave Bruce an attractive wife and gave himself a cameo. He built up a big twist ending and sold it as a secret that everyone who saw the film had to keep.

Honestly, the ending isn’t so much of a surprise. Knowing the end of Sixth Sense only makes it interesting when you watch it for a second time, making sure that nobody besides Osment talks to Willis. So the plot works like this for both movies: a screwed up character is haunted and has no idea why. A second character that is as flawed as the first comes along and guides the first character through a series of revelations and eventually shows him his true calling. Throughout, the first person has a believer and a doubter in his powers. Then the end reveals a secret about the second character that we didn’t know. Anyway, the plots are almost identical in their structure.

Despite liking the film, there are a bunch of things about it that are not so good. Samuel L. is looking for someone who is the polar opposite of himself. He is Mr. Glass — the man who breaks when the wind blows. He is looking for a comic bookish character who is, well, unbreakable. And where does he find him after all these years? Right in his hometown of Philly. Hmm, too convenient. Willis’ son believes that his dad is an unbreakable superhero after hearing Samuel L. tell his tale, so he threatens to shoot him with a gun to prove he cannot be injured. Come on. The fact that Willis’ character has never gotten sick or injured (especially after playing football for what must have been many years) didn’t ever strike him as odd? Not likely. Besides, who has ever heard of a balding superhero? If he was really so super, couldn’t he have stopped his hair from falling out? Luckily all this silliness is covered by the comic book plot device. The movie is a comic book story. It’s early Superman in the disguise of high art. Samuel L. is a high-class comic book dealer. He talks about the themes of good and evil, and how comic books relate to real-life struggles. He is in a wheelchair for the second half of the movie. They might as well have given the guy a fluffy, white cat to stroke.

Despite all its flaws (including the director falling in love with some of his shots) I enjoyed the film as a whole. It had a strange underwater feel to it that was creepy and fun. I’m always amazed that films like this get made. When M. walked into the executives’ offices at Touchstone and pitched this thing, their jaws must have hit the floor. The balls on this guy! I guess they trusted him after Sixth Sense, but they must have been worried about a slow-paced, cerebral, comic-book movie. Doesn’t exactly sound like a blockbuster, eh? It’s funny, I had heard all sorts of things about this flick before seeing it on DVD, ranging from boring to creepy, but nobody bothered to mention the comic book aspect to the film. I mean, Willis’ character is named David Dunn (no, not the football player) and wears green the entire movie. Those superheroes sure do like their alliteration. I know it doesn’t sound like I enjoyed this movie very much, but it left me with an eerie feeling and a thought that very few movies these days even make the attempt to be challenging (without being pretentious art films). My one question remains: if Willis is in fact unbreakable, what the hell happened to his hair follicles? Think about it.