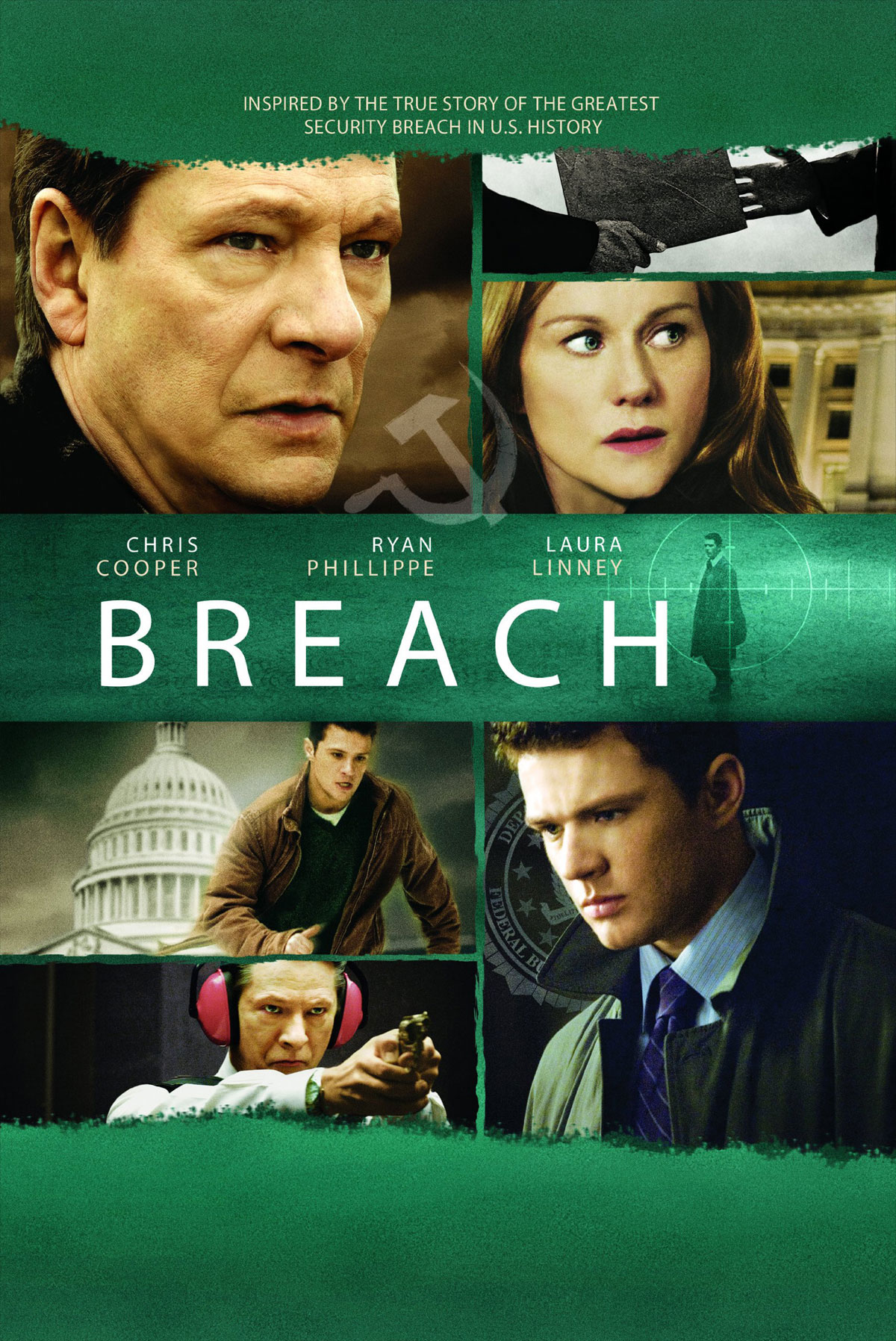 Much like Billy Ray’s other film, Shattered Glass, Breach feels more like a television movie than a feature film. In fact, the two films have more in common than just their director and his weird, claustrophobic directing style. They’re both true stories in which otherwise earnest people get caught up in lies and deception, and end up betraying all those around them.

Of course all Stephen Glass did was write some fake-ass articles, while Robert Hanssen sold military secrets to the Russians, endangering our national security and getting several key informants and government people killed. The two are also different in that Glass was just a young, inept reporter who told one lie that avalanched into a slew of lies, which eventually led to a struggle for self-preservation. Hanssen is a man who just thought he was smarter than everyone else, and wanted to prove it by outsmarting his own friends and colleagues, who he felt hadn’t recognized his contribution properly. His was one part hubris and one part revenge.

It took the FBI years to figure out who the mole was (partially because at one time Hanssen himself was in charge of rooting out the rat), and when they did, they could never catch Hanssen in the act. Enter young FBI plebe, Eric O’Neill. Highly motivated and overly eager, he made a perfect person to pair with Hanssen in order to keep tabs on him. Of course, O’Neill doesn’t know exactly why he’s writing journals about everything Hanssen says and does and handing them over to another FBI agent. He thinks he’s on perv duty, noting all of this because Hanssen is making inappropriate posts to sex websites and harassing female subordinates.

The story kind of writes itself, honestly. It’s compelling and downright cool. Problem is, this would have made a much better documentary than docudrama. Or perhaps it would have been successful in the hands of a more appropriate director that didn’t make everything look like a second-rate school production. The FBI building sets, for instance, while appropriately drab, looked like bad television set pieces. Scenes that feel like they should have been filled with extras and random folks are eerily empty. I can only assume the budget didn’t allow for it?

I don’t know what the story is, but Ray completely botched the direction. The thing feels cheap and the direction flat. With these types of movies it feels like it either needs to be hyper-real in a documentary sense, or supercharged like Traffic or Syriana. This fell closer to the real side of the spectrum, but real in a humdrum way. There was very little energy to it. Even the scenes that were supposed to be suspenseful (will O’Neill be able to check Hanssen’s desk before he comes back from wherever?) get killed by the bad direction. The poor actors do the best they can with the flabby script, but too often you can almost see them reading their lines in their trailers as they go back and forth in some inane exchange. Chris Cooper is pretty great, though, as the increasingly haggard Hanssen. It’s hard to divorce Ryan Phillipe from his real-life douchbaggery (as well as that odd knot on his forehead), and I kept thinking of some of his infamous dealings with his ex, Reese Witherspoon, but he does a decent job as the somewhat naive O’Neill.

It’s just a shame, as this movie could have been awesome in the hands of a director who really knows how to work a scene. And, oh my god, I just looked up this Billy Ray douche on IMDB, and he wrote Suspect Zero, one of the worst movies I’ve seen in quite some time. They should revoke his DGA and WGA cards and hand over the reigns to someone who knows what he’s doing. Otherwise we’re going to get the after school special version of the Blackwater or Enron story. [DVD, MF]