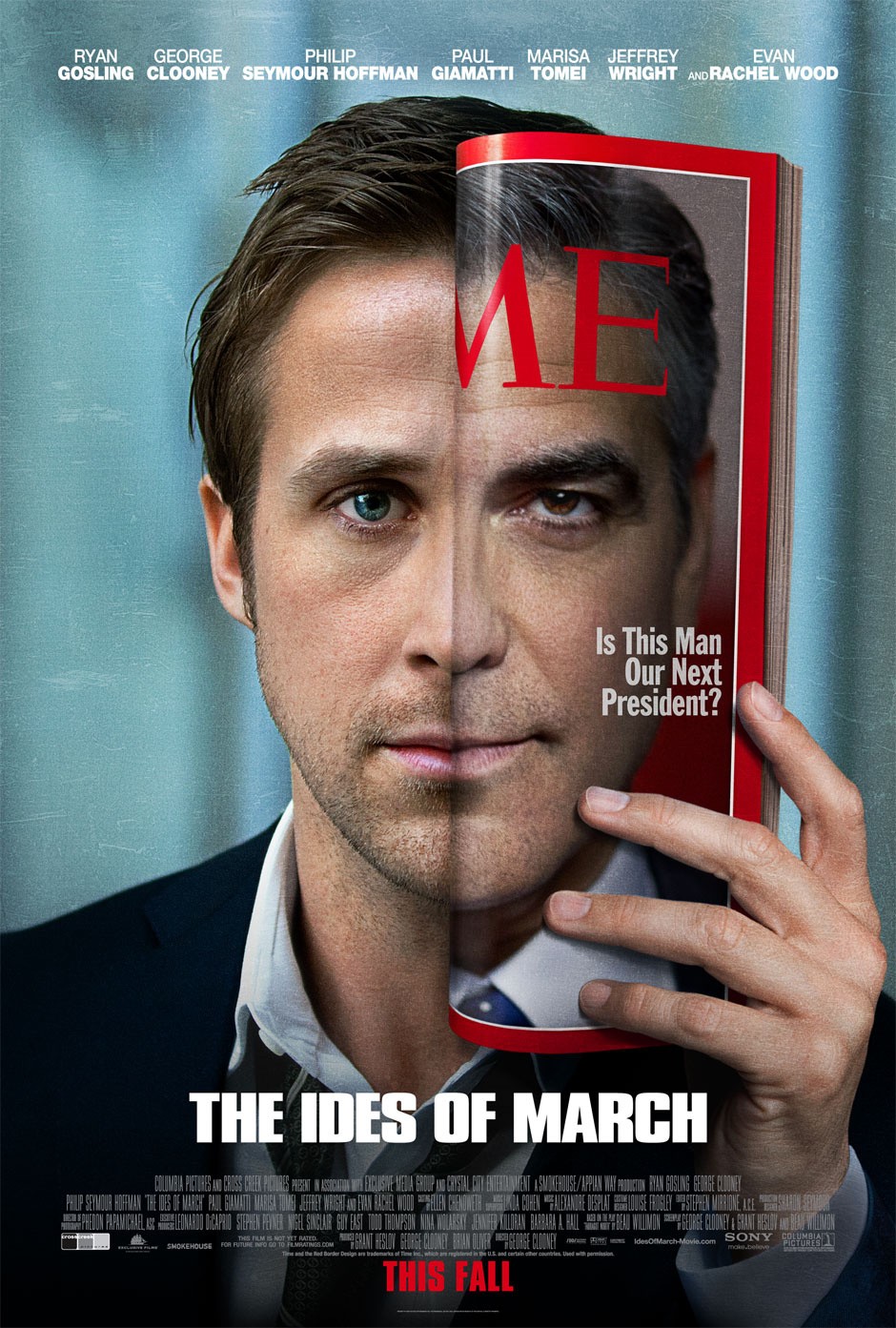 The Ides of March

All I seem to see these days are Ryan Gosling movies. Maybe it’s his cut abs. Maybe it’s coincidence. Or maybe he’s 2011’s Zach Galifianakis or Philip Seymour Hoffman and is just in every damn movie that comes out. Now, when people call him the best actor of his generation, I feel that’s a bit of a stretch. Unless acting consists of standing still and staring into the camera with your slightly wonky eye and then kind of mumbling lines in an understated meeker voice than you’d expect. I feel like he’s a poor man’s Ed Norton — but buffer and not as compelling. Perhaps what people like about him is that, unlike George Clooney, he is so personalityless that directors can just pour characters into his empty shell and Ryan Gosling just disappears. A plus and minus.

Clooney on the other hand is almost always undeniably Clooney. It’s impossible to look at him and not just expect that any minute he’ll give that smile, crack a self-deprecating joke and then take a model home for a naked pool party with a Russian Diplomat, the Victoria Secret Angels (all of ’em) and Barbra Walters. He’s just undeniably charismatic George no matter what part he’s playing, It’s hard to turn it off, I suppose. In this movie he’s even more himself than usual, playing a lefty Governor from Pennsylvania running for President in the Democratic primary. I feel like some of the policy speeches he gives in the movie are direct rips from any number Clooney himself has given over the past decade of political activism of sorts.

Gosling is one of Clooney’s junior campaign manager, pegged as the press relations guy who can handle any and all reporters and stories. Philip Seymour Hoffman (see, there he is!) is his boss, and a person who appears to be a mentor of sorts. The campaign seems altruistic and it’s clear Gosling’s character believes in the candidacy and its message. A perfect thing, right? But through a series of coincidences and really kind if janky storytelling, he uncovers a dark spot in Clooney’s character. What to do? His hero is tainted and now all that he stands for seems a sham. Why what amounts to a sexual liaison outside his marriage with a young staffer makes all his other policies a sham I’m not sure. I would understand why he’s disillusioned with the man he looks up to, but if the message outweighs the candidate, why is this such a problem?

Anyhow, going back, Gosling does something stupid by meeting with the opposition’s campaign manager (Giamatti) — his boss’ rival. He gets caught and basically thrown under the bus for it. But, and his boss rightly calls this out, why would he do such a thing unless his loyalty to Clooney was wavering, or his ego so big that he thought he was obviously going to gain something from or have his ego stroked by meeting with the guy? It couldn’t have been pure curiosity. It was hubris. He was flattered to be in that upper echelon, and he f’d up. So his aspirations and loyalty, while he thinks they are in tact, aren’t as strong as he thinks they are. And loyalty in politics is everything.

The movie then kind of settles into middling political thriller territory. Though it’s more political than thriller. And even the political part feels a bit claustrophobic for a huge political campaign. The bright lights not so bright, the crowds not so big, the pressure not so obviously pressurized. It felt more like a guy running for congress than a dude who could have his finger on the button in a few months. I don’t know if this was Clooney’s direction, the budget (or lack thereof), or just my general feeling. I just didn’t have that pit in my stomach that I should have. It’s not as if the world is going to implode, someone’s going to die or a person with an agenda to blow up the US was going to make it all the way to the White House. What we’re told to feel tense about is the fact Gosling might lose his job. Seriously, that’s it. Well, that and a guy who looks to have all his policies in the right place, but happens to be an adulterer will make it to the Presidency. Bill Clinton anyone? This thing was originally a play. And, honestly, it feels like it. Too small, too compartmentalized.

And then there’s the ridiculous scene where Clooney meets Gosling in the kitchen in shadow to confront some blackmail evidence Gosling has to present to him. It’s so over the top and gangstery and out of character it actually made me laugh out load. They may have well been in the pork store with the air conditioning blowing and people being frisked by some guy named Pauly. It almost ruined the whole movie for me. But luckily, I happen to like politics and what happens in campaigns, and I feel like Clooney at least tried to make a movie that wasn’t stupid and didn’t dumb things down too heavily and tried to make a point about the corrupting power of, well, power. And I get that, and I see his point to some extent, and I even appreciate some of the subtleties, but the story itself is rather dull in its execution and the characters not as interesting as he clearly thinks they are. Eh, it’ll get remade in ten years as a shoot ‘em up and I’ll be right back here telling you how the original was so awesome.