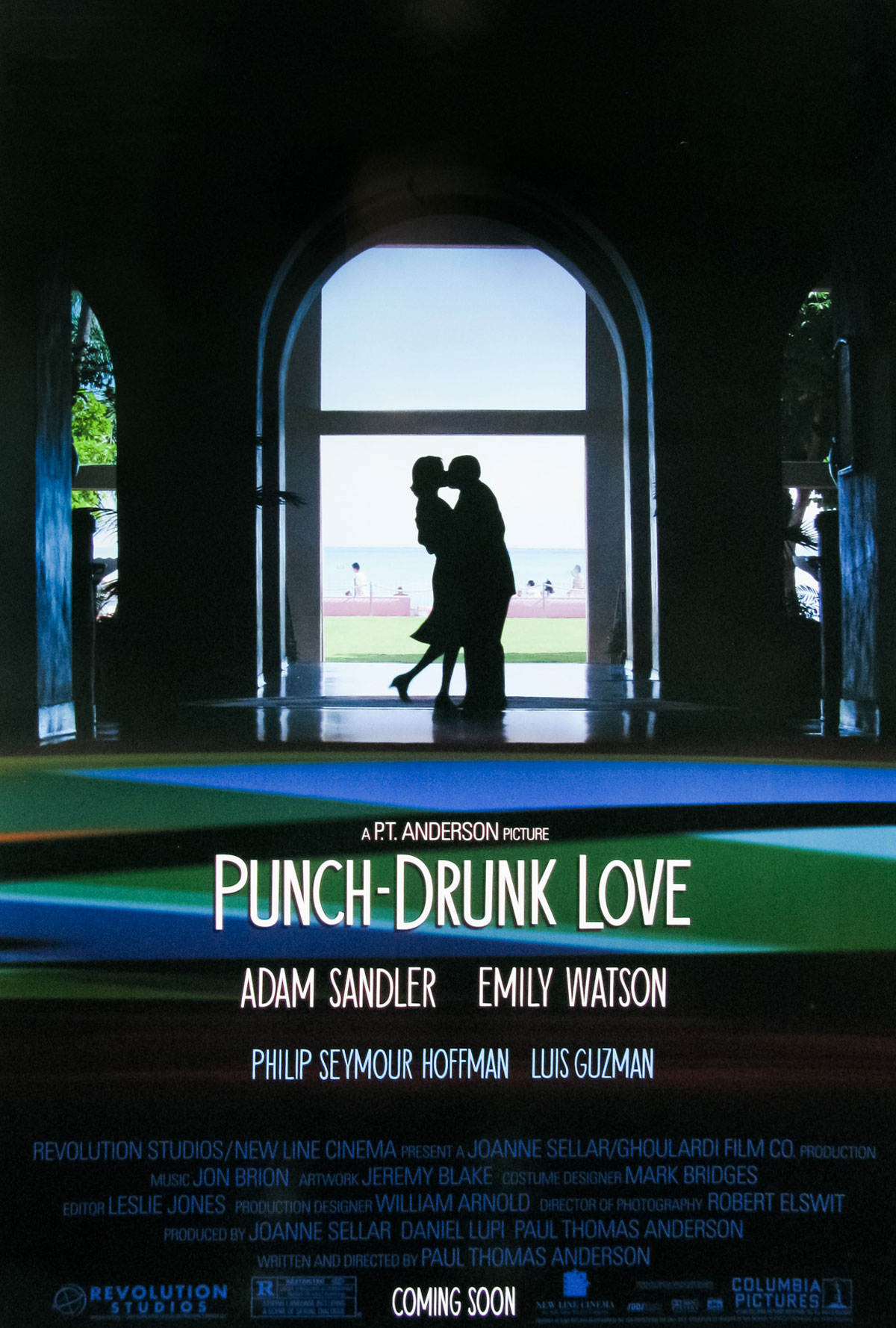 Where to start? Well, I guess the beginning is the best place. First, we have an Adam Sandler movie that’s as far away from your typical Adam Sandler movie as any movie can be without being Star Wars, for instance. Sure, there are some Sandler-like freak outs, and a little bit of yelling, but not a single character gets hit in the nuts, and there is not a single line uttered in that annoying baby-talk anywhere.

One of the greatest things is hearing P.T. Anderson’s words coming out of Sandler’s mouth. It’s pretty funny. I mean, the term “motherfucker” is funny when anybody says it, but coming out of the The Waterboy’s head? Classic. So, Sandler plays a character named Barry who owns a plunger company in the San Fernando Valley. He is working there early one morning when he decides to go out to the street for no apparent reason. Suddenly a car driving down the street flips over and a taxi stops in front of him and drops off a small piano. None of this really makes much sense, nor is it ever explained over the course of the movie.

We can tell right off the bat that Barry’s bleak life is going to take some weird turns in the near future. Barry essentially adopts this piano and takes it into his warehouse office. Throughout the film, this little piano seems to be the only thing that brings him joy, the only thing he has for himself, the only thing that he understands and has mastery over. That is, until Emily Watson shows up (and happens to know that the thing isn’t a piano but is in fact called a harmonium). He is one of eight siblings, seven of whom are women. His sisters have obviously spent their lives torturing him and driving him to the depth of insecurity at which we first find him. They call him “retard” and “gayboy.” They question all of his choices and lifestyle decisions. Their nagging drives him into violent rages (the one old school Sandler hold-over), and forces him to cover up all truths about himself. His biggest fear in life is that his sisters will find out personal things about him (or share them with others), and expose him for the sad, little man he is.

This is evident in his denial of his “pudding project,” his purchase of the blue suit that he wears the entire film, his denial of the childhood hammer-through-the-window incident, the paranoia about anonymity when calling a sex line, as well as the secrecy around the harmonium. Everything changes after he meets Emily Watson–as this is a love story, after all. We learn that all it takes is love (and the trust that comes with love) to unlock the strength that we all have inside… Anyway, that’s the message here.

It’s much more involved than I’m letting on, but I don’t want to ruin the whole thing for you (or be typing all night). P.T. Anderson’s direction is way cool, as usual. There’s a weird blue halo that seems to follow Sandler around the entire film and matches the color of his Mets-blue suit. Anderson manages to take a very indie looking film style that includes some scenes with what appears to be completely natural lighting and audio, but adds little elements like this colorization, and amazing shots of the characters in silhouette that really makes the film shine. There are shots where you can see spots on the camera lens and sun flares in the iris. The thing just looks cool.

Sandler is actually great in his role, despite the occasional reminder that he is indeed the guy who made Happy Gilmore. Emily Watson, and her strange, one-of-the-seven-dwarves look is authentic and subdued in a way that very few actresses can pull off these days. These days actors all want to be witty, cool, tongue-in-cheek, and almost mocking of their character’s awkwardness, but both actors play this one straight and succeed where others most certainly would have failed. Luis Guzman was great as usual, as Anderson tends to give him great comic lines and he delivers them with deadpan awesomeness.

This film is most certainly not for everyone. It’ll leave some scratching their heads and wondering why they spent an hour and a half watching nonsense. To them I say, “Hey, you could have spent three hours watching one of Anderson’s other films, which you also wouldn’t have liked.” The shit is deep, the shit is cool, and it’s going to be a shame, now knowing what he has to offer, to see Sandler go back to lame screwball comedies.