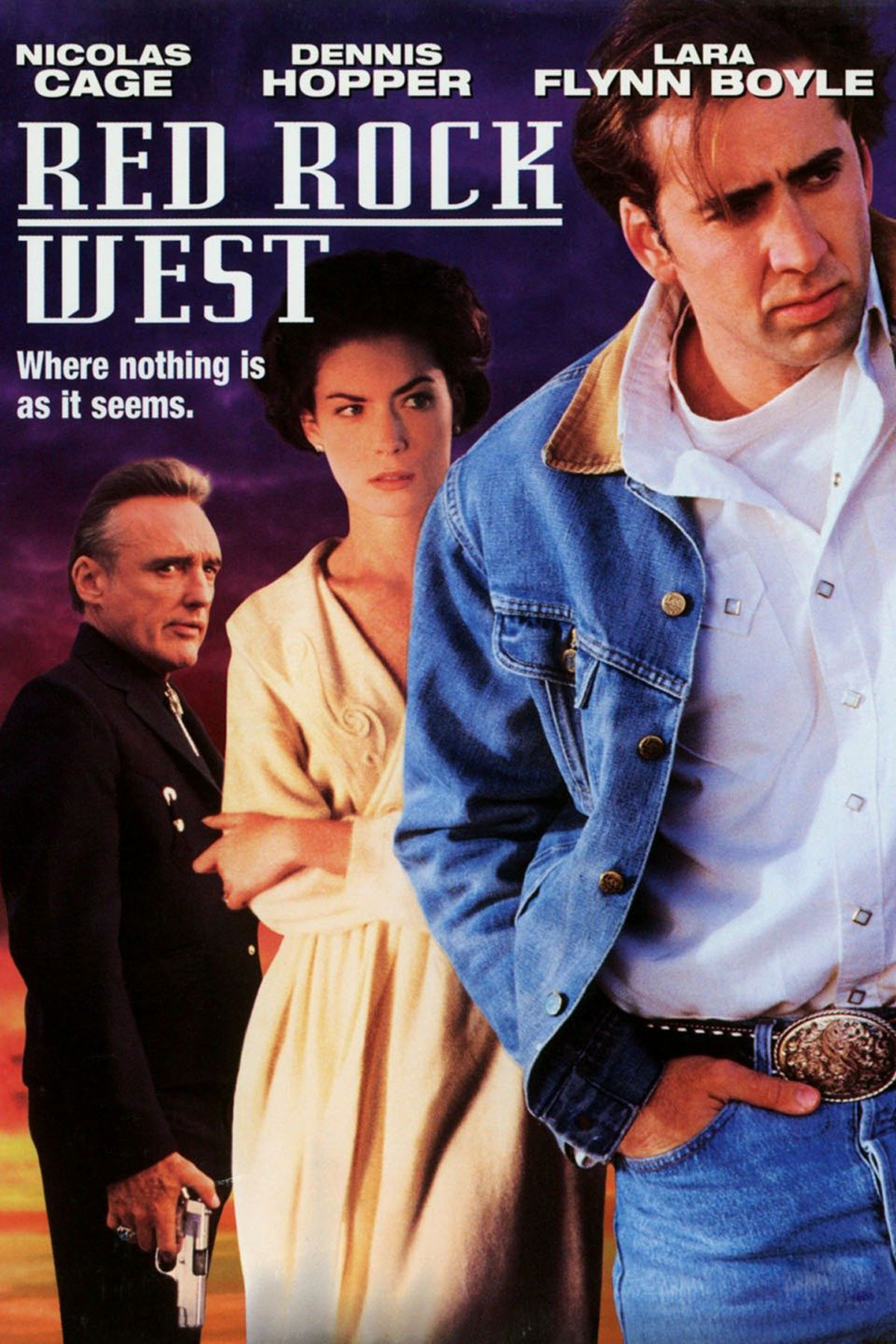 There was a time in the early-to-mid nineties when this neo-noir thing was big. I mean, it’s always been big, but this movie, Red Rock West, along with another John Dahl film, The Last Seduction, were all the rage. These kind of claustrophobic indie films with relatively simple, crime-based narratives that were one part film noir, one part updated Western. But at the heart there is a gritty realism that kind of takes that 40s noir plot (complete with a femme fatale), but adds the violence and tactile feel of the real world that came out of the 70s. Any of the gloss or “modern” flavor of those pretty awful 80s movies have been excised.

Before I even get into the movie itself, I have a question. How is it possible Nicolas Cage is only like 28 years old in this movie? He’s referred to as “son” a few times, and my brain was instantly like, “Why do they keep calling this 40-year-old man these diminutive names as if he’s a young person?” Well, because apparently he was a young person when he made this, despite all appearances to the contrary. Just as weird, Lara Flynn Boyle is only like 22 or 23, which definitely doesn’t play either. Maybe it’s because her husband is played by a 50-year-old J.T. Walsh, or maybe it’s her oddly matronly haircut, but she doesn’t seem like a woman just out of college. Whatever the case, this instantaneously distracted me.

The fact that the conceit here is that everything that triggers the narrative is based on a misunderstanding isn’t great. It’s like an extended Three’s Company episode. Except instead of Mr. Furley overhearing Chrissy talking about a turkey she plans to buy for Thanksgiving and thinking she’s talking about a baby she’s going to have (I thought Chrissy was a virgin!), in this case J.T. Walsh confuses Cage’s drifter character for the assassin he’s hired to murder his wife. And why would he do a thing like that? Uh, because Cage has Texas plates on his car — and he knows the killer is coming from Texas. Because apparently Texas plates are out of the ordinary in this Wyoming town? Erm, I guess. But, really, if you’re going to hire a dude to kill your wife, you’d think you’d have like a codeword or something to confirm the guy is who he says he is. Also, is there like some murder-for-hire hotline you can call? Like a service that sends a guy all the way from Texas? Are there not local assassins? Like a Wyoming affiliate of Murder For Hire, Inc.? Guess not.

Anyhow, Cage, after not landing that plumb oil rig job he planned to get because of his bum leg, figures that he’ll take the money to kill the wife despite having no plan to kill the wife. He’s a desperate guy, after all. He doesn’t even have enough cash to gas up his insanely large car that probably gets four miles per gallon! And he also figured he’ll just keep that money, warn the woman that her old-ass husband is trying to murder her and move on. But how did he know the wife was such a young hottie? I mean, she’s so cute, why not stick around knowing that in a day or so the real assassin is going to show up and everyone will realize what’s up. The guy coming to town who murders for a living. Yeah, man, not a great plan.

So, in a long line of films where dudes make really dumb decisions for “love” (which definitely isn’t actually love), Cage decides against his best interest and gets himself entangled with the real killer, Dennis Hopper. A dude so ridiculously Texas, that he becomes almost clownish. I think Hopper is always one dude in directors’ minds, but turns out to be something else when he shows up. Sure, he can be menacing, and is a pretty charismatic guy. But is he a good actor? I mean, he’s way better in this than he was in 24 when trying to do a Russian accent, but if you’re going to hire a below-the-radar murderer to quietly come into town to kill your wife, do you hire a dude in a giant Cadillac who talks loudly and hangs out in public places in a bad-guy, gunslinger getup that looks like he ripped it off a mannequin at the Gene Autry museum? Yeah, it’s completely unrealistic and stupid and Hopper’s over-acting only adds to the silliness.

In fact, the entirety of the film once we get into the minutia of the plot is weirdly stilted. I’m not sure if it’s the chemistry of the cast (none of whom are particularly Shakespearean) or just the fact that past the initial “confusion” they didn’t have much of an idea of what to do, but the movie mostly just kind of lies there. Lays there? Anyway, there’s just a lot of build up to what you know is going to be a confrontation between Cage and Hopper. And when it does happen, it’s kind of not that interesting. They do try to throw in a twist or two, but again, it kind of falls flat. And what you end up with is an “acting” vehicle for Cage to emote and pretend to run on a bad leg that is mostly good, but sometimes bad when it’s least convenient. It’s not a subtle affair.

Now, I imagine this is a bit of recency bias, but this film doesn’t really hold up very well. I remember seeing it back in 1993 and thinking it was pretty badass. But I was taking a film noir class in college, so I thought anything in this genre was pretty cool. And we all apparently loved the darker nature of these films over the bubble gum of the late eighties. So I don’t know if my taste has improved, or if I just demand more out of my media, but this thing is just kind wallpaper in a landscape now that feels much more like high-wire art.