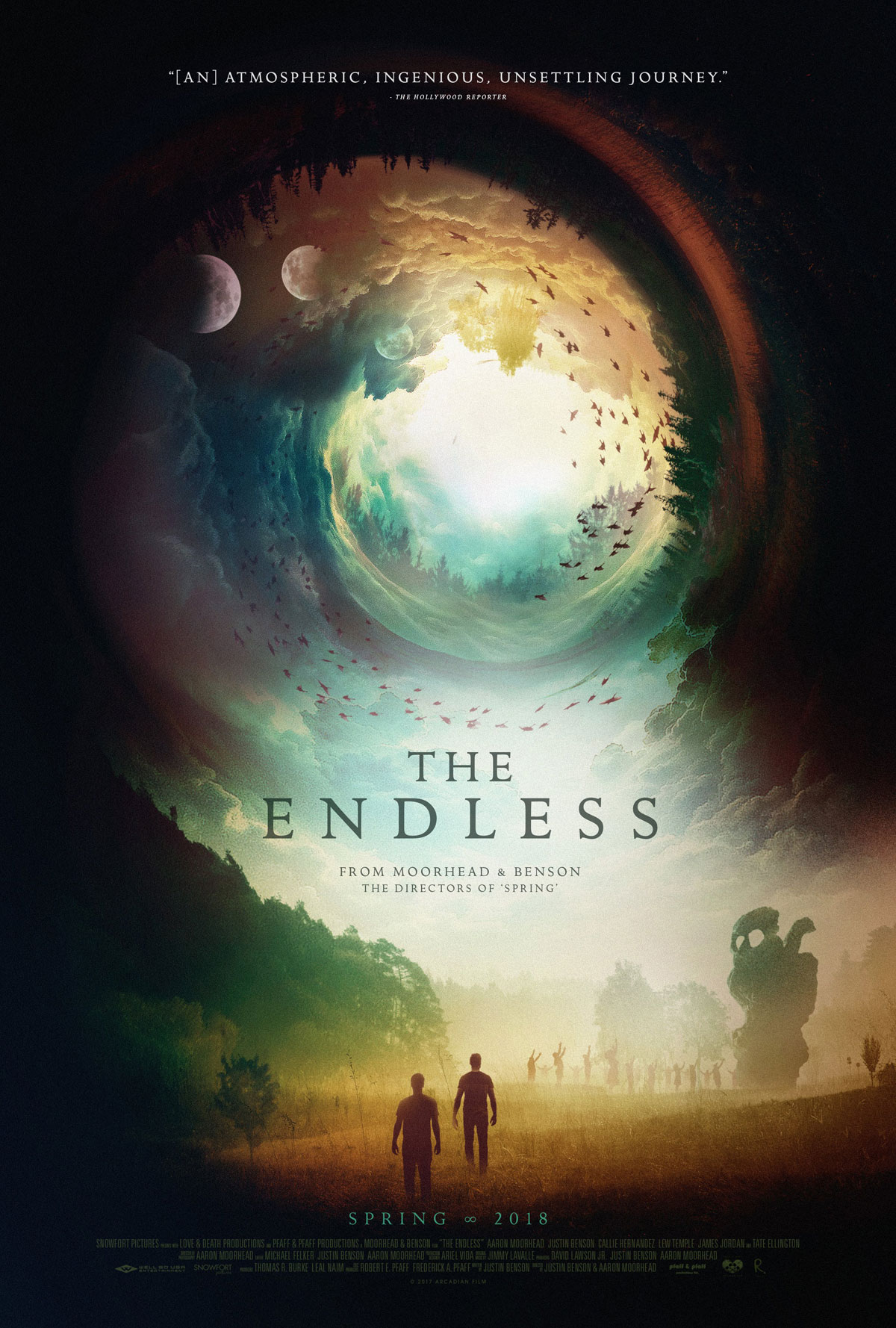 So apparently low budget sci-fi is now my thing. Even if this movie is less sci-fi and more supernatural. Because I believe sci-fi is supposed to supposed be “science based,” which I’m pretty sure The Endless is not. Regardless of its categorization, I want to congratulate the folks who created both the movie poster and trailer for making this film look way cooler than it ends up being. Because, of course, key art and two minutes of selective editing set to music are a much smaller lift than making almost two hours of narrative hang together.

The draw here is a plot that revolves around a doomsday cult. Because who doesn’t love those? I don’t mean like joining one, but more watching stuff about them. Two brothers, played by filmmakers Aaron Moorhead and Justin Benson, are living a meager existence in Southern California. One is around 28, the other around 33 (based on the actors’ real ages and rounding down a couple based on people always playing younger). Maybe I wasn’t paying close attention, but I didn’t even realize they were supposed to be brothers until like 15 minutes into the movie. It could be because they look nothing alike. Or it could be clumsy writing. I’m not sure.

Anyhow, they discuss this cult they were in starting at — if I’m doing the math right here — maybe 10 and 15 years old? And stayed in for roughly eight years before escaping at around ages 18 and 23. Because you know I’m always a stickler about timelines lining up, especially in films that play with time like this one does. So, this is the most logical thing I can discern. Though I’m dubious based on some of what they say (and a scene in which they appear as their younger selves in really bad wigs) that they care as much about this as I do about this point — which puts me on my heels right off the bat. So, one day the brothers get a video tape from a member of the cult talking about “ascension,” which older brother, Justin, thinks is code for mass suicide when the alien overlords come. But younger brother, Aaron, thinks it’s more innocuous than that and that the whole thing was less alien death cult than hippies in the woods with some odd, but harmless ideas. Anyhow, Aaron convinces Justin that maybe what they need to break out of their rut since leaving the cult is to return to the cult for a visit. For some closure or something. Seems like a great idea, right? Of course not. But they do it anyway.

What we really don’t have at this point — but will become the most important dynamic and the crux of the entire film — is a sense of the brothers’ relationship. Yes, we know they’re struggling, and we get the vague sense that the older brother is a little protective and/or even a little dismissive of the younger brother — as is customary – but we’re never really shown what that dynamic looks like. Which is seemingly odd given how much weight that relationship is given not only at the end of the film, but the heft it’s expected to carry thematically. To me it was just a miss not setting up that narrative from the get go. But, hey, I’m writing a blog thing that like four people will read, so what do I know?

So off the brothers go to what appears to be a crunchy summer camp somewhere in the forest east of San Diego. Now, from what we gather, they’ve had no contact with these cult folks for nearly ten years. And seemed genuinely surprised that they hadn’t killed themselves when the video tape showed up. Which seems kind of weird, given the fact that if a bunch of people committed mass suicide just east of a major metropolitan city, they might have been found out and definitely made the news. After all, this is California, not some isolated third-world country. But they go to the camp based solely on the video tape evidence that there are still living residents of Camp Arcadia, and seem completely nonplussed when they show up and all their old buddies are there, seemingly not having aged a day in ten years. Which means — again doing some math — they’ve actually not aged in over 18 years. I feel like perhaps the brothers attribute it to healthy living, but that makes absolutely no sense. Yada yada.

After not being surprised to see everyone alive and un-aged, they decide to hang out for a bit. Sleeping over, joining the cult for meals, sampling a bunch of the beer that seems to be the main income for the cult. They join in some tug of war with a sky spirit and notice that there are three moons in the sky. You know, all normal crap that wouldn’t send anyone running away immediately. All I’m saying is that there is some weird shit going on in Arcadia that is not easily explained. Nor do they seem to remember the three-moon thing after living there for almost a decade. Huh? Though the inhabitants of the camp come off as pretty friendly, despite the fact the brothers went to the media after escaping and basically ratted them out as a death cult. True or not. And that is the central mystery, I guess. Are these folks some sort of friendly face on a malignant force? Or are they just hippie beer exporters enjoying the freedom of hanging in the woods?

Over time we’re given clues as to what’s up. Aaron, on a walk through the woods, has a photograph of himself looking up dropped on him. Okay… Seems something out there likes to communicate using “media.” Which — truth be told — kind of irked me. It’s such a film dude thing to say that some mysterious force essentially uses film to communicate. Because that force really wanted a BFA from NYU, but instead settled for being an alien/supernatural sky demon who likes to haunt people with VHS tapes and Polaroids? It’s seriously goofy and really took me out of it.

As I first mentioned, it does seem that whomever cut together the trailer took all of the cool shots and shoved them in there. All the places where the filmmakers spent what little money they had to create special effects or lean into the horror aspect of the film. All set to the public domain song, “House of the Rising Sun.” Where it ends up, though, is in sci-fi trope land: time loops! Yes, the tried and true time loop. Seemingly multiple time loops. All over the forest. Bubbles of time loops. The rules of which vary based on the loop. Which, in and of itself, feels like a bit of a cop out. But I’m sure the writers would say that, hey, this is what happens in our particular version of this shit. So shut up. Which, I suppose is fine if you don’t have a bug up your ass about this kind of stuff like me. The only problem is that despite being inundated with time loop stuff lately, I had to wait until after the film ended to go online to figure what the heck was going on. I thought I got it, but the rules and explanations were vague enough that I was definitely guessing. Which, in this type of film, I don’t love. Ambiguity is fine when it comes to certain things, but when dealing with time, you have to have concrete and repeatable rules.

Ultimately, the movie fails to live up to the promise of its marketing, but is still an interesting experiment on what two motivated dudes can do on a very tight budget. I know The Endless was a kinda, sorta sequel to their 2012 film, Resolution, and that they’ve talked about continuing to play in this universe in the future. I’m curious to see what exactly they’d explore in the next iteration of this, given some time to think through some of the narrative holes and thematic wobbles this one had to strengthen it in the 3.0 version. And, maybe, get a few more bucks to even out the obvious spending spikes and valleys along the way.