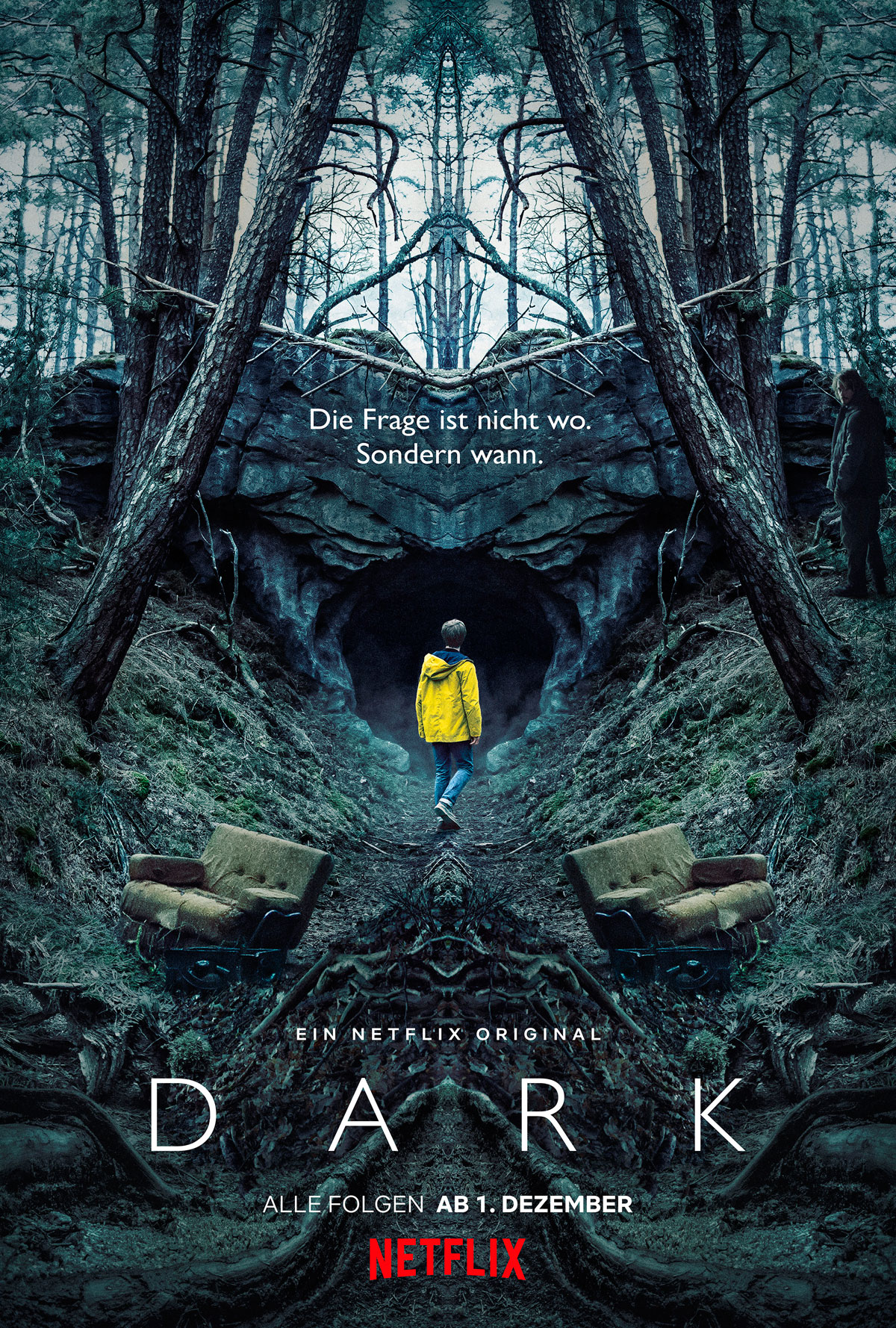 The Germans don’t mince words. They are efficient and don’t waste breath on flowery language. So it’s not surprising that they went with the very succinct, super-descriptive title for this show: Dark. Both an adjective and a noun, it pretty much fits the mood of the series. It doesn’t tell you a whole lot in terms of what it’s about, but neither do the other series that it seems to be an amalgam of: Stranger Things, The OA and a less-seen Australian series called The Kettering Incident. Oddly, though, it has more in common setup-wise with Back to the Future than any of these. It’s as if you took that classic American flick, sucked out any ounce of humor, put it in a rainy forest village in Germany and added some dead kids.

And rain it does. Every scene is wet. The characters’ hair is always limp and their clothes damp. Though the rain seems to pick up as the season goes on, the second half of its ten episodes practically acted through a curtain of wet. It certainly creates an atmosphere that is instantly recognizable the second you’re dropped back into it at the start of each episode. But what really removes you — and this is totally my stupid fault — are the really, really bad English-dubbed voices. By default, when streaming this from Netflix, the English dub was turned on. I didn’t even think to turn it off and watch it with English subtitles, which would normally be how I’d watch any of the foreign shows I happen to watch. I imagine this was something done by Netflix, as this is technically a Netflix original series, and they wanted the default experience to be the English dub. But, let me tell, you; it’s atrocious. Like 3rd-grade-play bad. It was already bad enough that everyone is white and looks vaguely similar, but with the weird American-ish actor voices that are all flat and soulless, it adds to the homogeneity of the cast.

To add, a good deal of the adult cast has two versions of themselves: the 2019 version and the 1986 version. Some even have a 1953 version, so it takes white people and multiplies the confusion by two or three times. Granted, the people are different ages in each era, but then you have to connect the child/young adult/adult in 1986 with the adult/older adult/ancient adult in 2019. They certainly try to go back and remind you every once in a while who’s who, but sometimes it felt like trying to follow an Italian crime family evidence board with the pins and string and the nicknames and aliases. I found myself pausing a lot, looking at Ms. Hipster and going, “Wait, that’s the kid with the emo hair, right?” or “Is that the overly-serious nurse with the mole or the overly-serious woman who works in the hotel that nobody seems to ever check into?” I’m thinking that if I went back and watched it in the original German that it would not only be a better experience in terms of the acting and the emotion, but that the differing character voices might have helped differentiate who was who. Of course it would have meant way more reading, which would have cut into my obsessive Twitter refreshes to make sure our country hadn’t caught fire or been sold to the highest bidder in Moscow.

So, what is Dark about? It’s a sci-fi-based, time travel mystery about a small German town in the shadow of a nuclear power plant that, like most shows about small towns, is filled with secrets. Secret affairs. Secret parentage. Secret business dealings. And, of course, the secret that not everyone is who they say they are. And dead children. Always the dead children. Europeans just love their expired youngsters. So, the question is, in a town where everyone knows everyone else’s business, what don’t they know? For one, they seem to have that darn missing child problem. Every 33 years or so, children seem to disappear. Or so it seems. But what if the culprit isn’t a child murderer at all, but some sort of weird time travel portal deep in a cave in the forest under the nuclear power plant? Well, that would account for things. But only partially. Because there is clearly someone killing kids, as they’re starting to show up in the woods dressed in anachronistic clothing with their eyes blown out. But aside from the time travel and the murder, this is a family drama. What happens to extended families when all the secrets start coming out? When affairs are exposed? When backstories are blown up? When relationships sour and pasts are dug up? Oh, it gets ugly. But in the dubbed English, it’s as if someone might be speaking loudly over a leaf blower and not emotionally torn apart. Sure, their Germanic faces look distraught, but their voices are ordering something difficult off a seafood menu.

I don’t watch a ton of foreign television. And the stuff I do watch is rarely German. But, honestly, if this is what it’s like to be a German teenager, I’m over the moon about never having been a German teenager. There is very little in the way of joy. There is nary a smile. It’s like living inside a Morrissey song. A very wet Morrissey song. But that’s just Germany for you, I guess. So let’s look at the time travel stuff. Because — truth be told — I’m a sucker for time travel stuff. The time travel in this show makes next to no sense. There is both an underground tunnel that somehow crosses dimensions or something. And then there’s this weird machine that also somehow opens the portals in those tunnels. But I’m not sure it actually does. And all of this is caused by something that went wrong in the nuclear power plant. Why something in a power plant would create a Pan’s Labyrinth-looking thing underground is beyond me, but there are quite a few things going on in this show that require a pretty heavy dose of just going with it. But this three-pronged tunnel/machine opens a rip in time that runs between 1953, 1986 and 2019. At first it seems that someone could only be in one timeline at a time, but that is disproven later. And that’s one of the traps that these time travel narratives fall into: what are the rules in this world? Can you change the future by changing the past? Is everything fated, or do we have free will? This show kind of cops out — or maybe in season two will answer exactly what the hell they mean — but they say that the past affects the future AND the future affects the past. Erm, is this like a True Detective “time is a flat circle” thing? Maybe it didn’t translate from the German? Maybe they watched Primer and decided that they wanted to fuck with me even harder?

Well, whatever the case, this thing has some slow spots, to be sure, but also has some pretty intriguing directions they could take it. I do hope that they trim some of the storylines a little bit or have them converge, but if [semi spoiler-alert] more people turn out to be their own relatives, the cast will be down quite a few people by mid-season two.