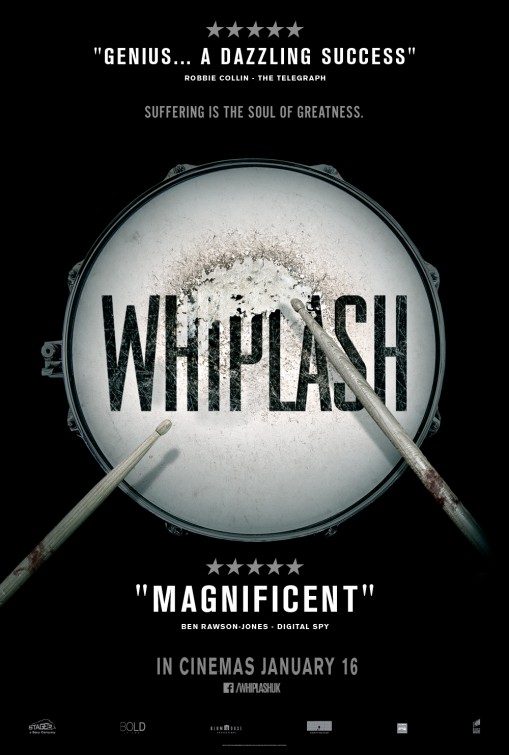 Let me start by saying that I resisted seeing this movie for quite a while. Despite all the awards and praise and the 1001 people who were like, “Oh my god, you haven’t seen Whiplash? You would love it; it’s totally your kind of movie.” First off, what the fuck do you know about what kind of movies I like? (This site and its two readers not withstanding.) Second, no it’s not. I can usually tell from a preview of I’m gonna like a movie or not. Yes, I’ve been fooled by previews in the past into thinking I’d like their movie, but it turned out to be a piece of shit. But very rarely do I watch a preview, think I’m going to hate it and end up liking it. It’s a one-way street. I can also tell, watching all the Oscar clips and the ubiquitous nature of this thing at awards shows, that those are the best scenes in the movie — because why else show the clip unless it best reps the film? Well, I watched and something just felt off to me. Ironically, it’s the cadence and beats of the filmmaking that was all weird. Perhaps its jazz-feeling, skip-all-the-hell-over-the-place nature was intentional, but just like jazz, I don’t like it. Or, more so, I didn’t like the preview of it.

And then I saw the whole thing, and that cadence, that flow, that swing that I felt was clunky in the preview translated itself to a movie, when away from the drumming, was honestly a pretty big mess. It felt at times like a student film, or early Kevin Smith (well, all Kevin Smith) with its stilted set-ups, nervous, unsure camera work and a desire to just get the characters to the next scene where two characters are standing around telling dick jokes. Or, in the case of this film, beating the crap out of drums. Even the power of J.K. Simmons’ performance suffered because the director was unsure at times where to put the camera. I also feel like I’ve seen this movie before. I mean usually that lead character has a bat in his hand, or a football helmet or maybe boxing gloves, but the “success, but at what cost?” narrative is as old as the hills. The “what are you willing to sacrifice to be the best?” question is one constantly asked. So what makes this one different? Maybe because it’s a white kid with Aspergers (or at least that’s hinted at) being yelled at by a white guy about an art form that little to no one cares about anymore that isn’t half-dead? And that despite the guy being a complete asshole, his yelling and belittling is definitely a non-life-threatening situation. So what if you’re the best jazz drummer ever? You get to play to more drooling octogenarians? What if you don’t make it? You end up as the best drumming sales dude at Home Depot. You’ll probably be better paid and help more people working in the lumber department. It just seems like a world’s-tallest-midget situation.

But to be fair-ish, I didn’t hate the music as much as I thought I would. Generally jazz drumming to me sounds like someone threw their wingtips in the dryer while a heavy-set elderly gentleman falls down the basement stairs. And the music itself is like a gaggle of honking geese being flattened by a UPS track with bad break pads. But these songs, including the title track ‘Whiplash,’ were actually okay. Most likely chosen for jazz haters like myself so we wouldn’t just walk out of the theater. On top of the subject matter, the ultimate message seemed super-confused. I suppose it’s “talent + hard work + sacrifice can get you to the top.” But it ignores the whole fact of how that person got there and the cautionary tales along the way. I suppose one would have to add to that message that it’s those three things, plus a lack of aversion to psychopathy and abuse. Call it mental toughness or self-awareness. Or perhaps a disorder that allows your brain to overcome all bullshit to attain your goal. If only we could all live on that plain, we could all be detached lovers of banging about.