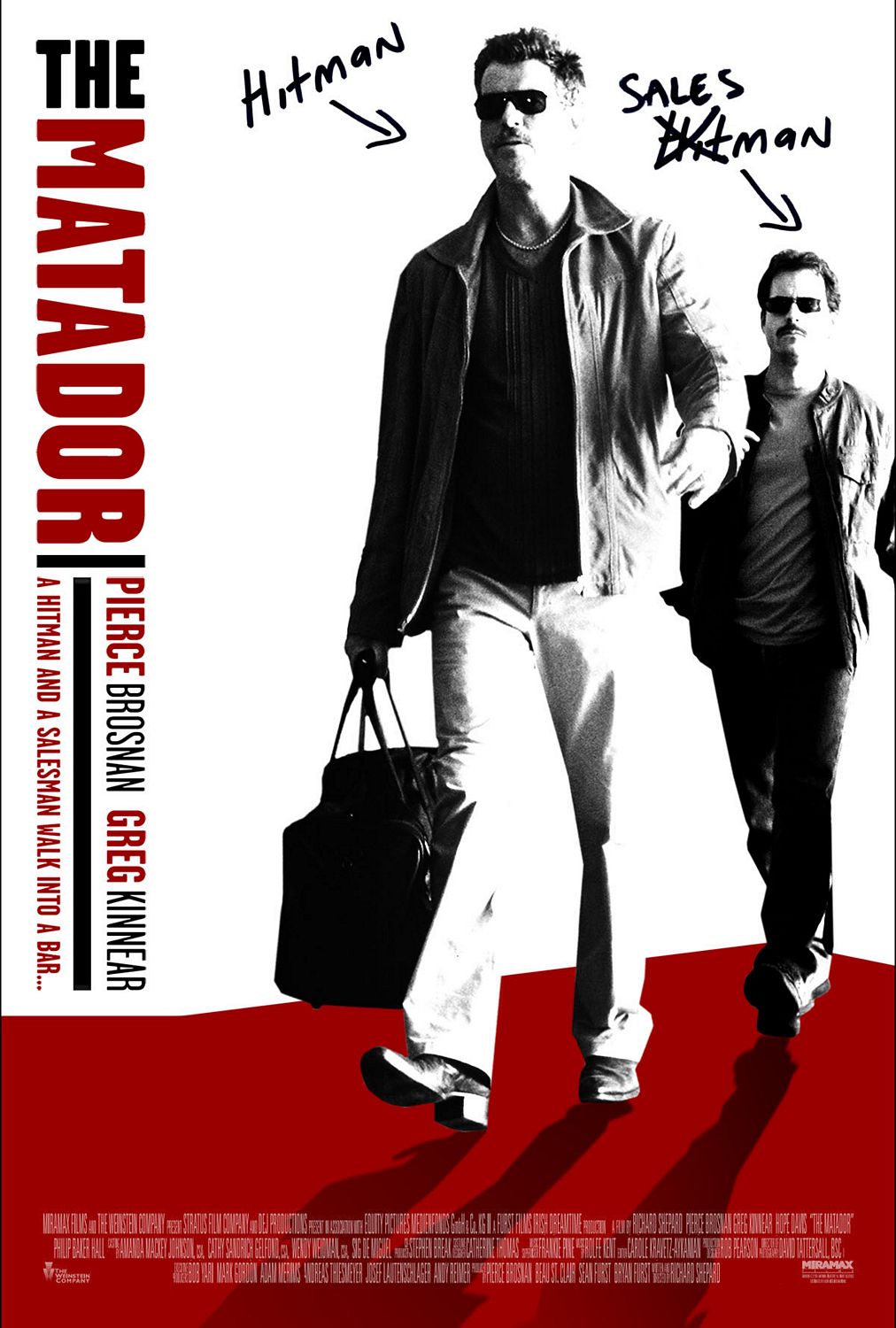 This movie felt oddly insular. I don’t know if it was the foreign locations or the sound production or something, but it felt as though the action was taking place in a lonely vacuum in a universe outside of our own. The initial feeling of bizarro world comes mostly from seeing the former Remington Steele and James Bond handsome-man, Pierce Brosnan, playing a cheeseball hitman. It’s hard to discern at first if his casting was intentional because of his former standing as a sex symbol of sorts, or if he just chose to play the guy this way in order to play against type. I’m still not sure, after watching the film, which is the case.

The whole hitman-as-human-being genre is certainly not a new one. Just off the top of my head I can think of at least three other films, Mr. & Mrs. Smith, The Professional and Grosse Pointe Blank, that deal in one way or another with this same thing. There are tons of others, but these are just the ones I immediately listed in my head as the assassin having to deal with the trivialities of every day life theme. Granted, it’s not as if this assassin’s life is filled with marital pressures, taking care of wayward orphans or high school reunions, but one would always imagine that there are neuroses that come along with blowing people up for a living.

It is nice, however, that they didn’t make this particular assassin a bumbling idiot or puppy-hugging softy. He’s a killer, no doubt, just one that has built up some anxiety after a life filled with travel, strange women, sleeping in hotels and having no lasting friendships. So who does he glom on to but yet another sad soul at a hotel bar? And that sad soul is Greg Kinnear playing his usual self: kind of uptight and desperate but nerdily affectionate and naive. Kinnear is there for a deal he’s making with a partner–a make or break deal that needs to happen for him. Brosnan is there on business as well, but his is obviously just all part of the usual.

After some uncomfortable back and forth between the two (where it becomes obvious Brosnan’s character isn’t used to dealing with other living human beings he isn’t paying for sex) they settle on the fact they’re not as unlike each other as one would think–despite a lot of these similarities being predicated on lies from the hitman. They become fast friends, with Brosnan even letting the little fella in on his secret profession. And, as is typical, both kind of want a little slice of the other’s life. To have a home and a wife is the hitman’s secret wish and Kinnear relishes the excitement and exotic nature of the hitman’s life away from the pain and general mundane stress of the corporate world.

Due to Brosnan’s character’s unpredictable personality and complete lack of understanding what it means to be a friend, the two guys have a falling out while on the same trip, and both pathetically part and retreat into their lives with both of them spiraling down the drain professionally and personally–or do they?

The two meet up again some time later and the whole thing is rehashed. So there’s a bit of a twist in there that turns out to be a sorta kinda twist. It’s convoluted and, while ultimately not hard to follow, could have been done much better. We find out the hitman does indeed have a heart and that Kinnear, well, Kinnear is a guy who just needed that spark to get him on the right track and pull him out of his desperation.