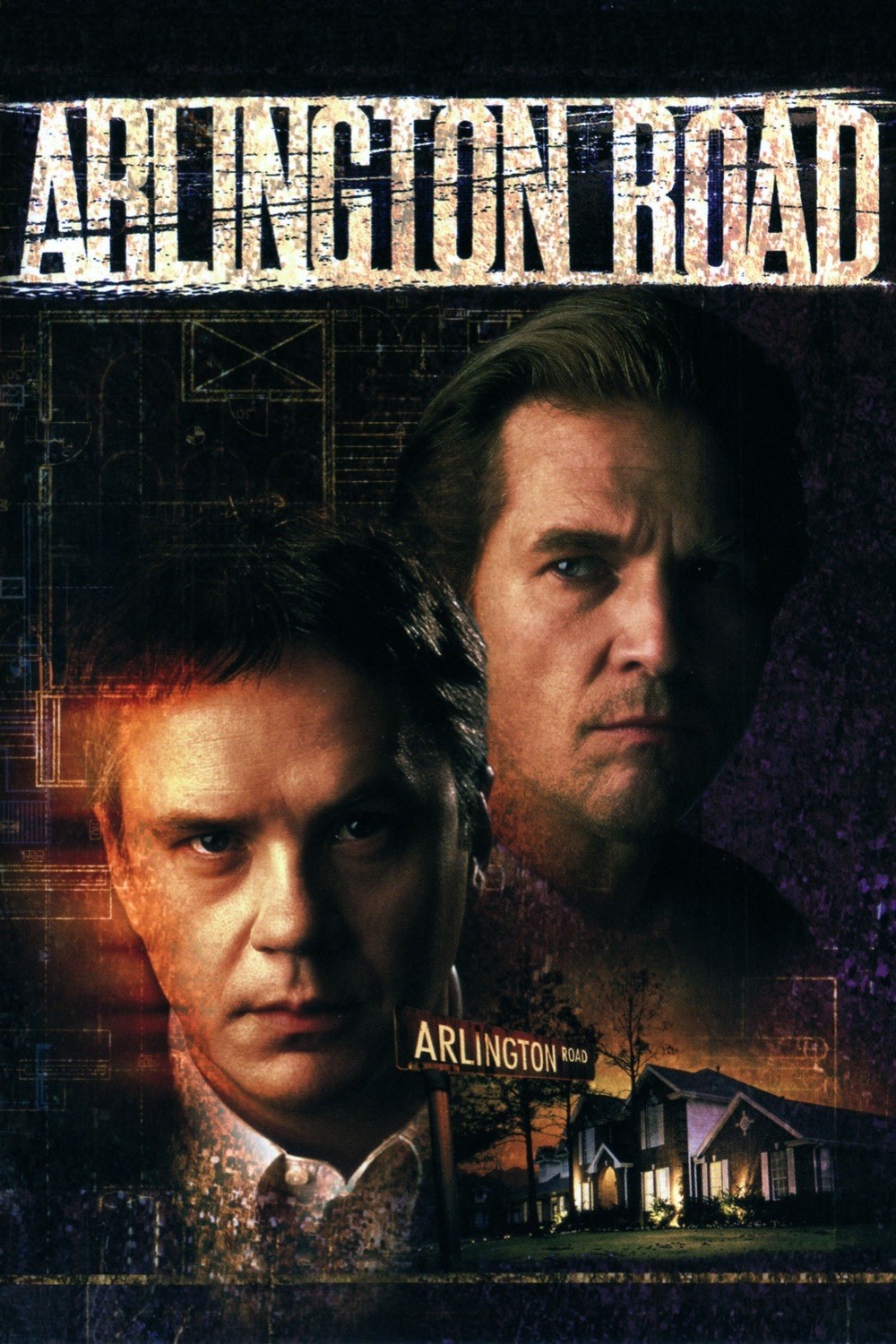 Arlington Road is a nice little suburban paranoia meets domestic terrorism film that keeps you guessing to the very end. The problem is there are too many “oh, come on” moments along the way. I spent a lot of the film thinking there were entirely too many wacky coincidences to make anything plausible. Contrivance through coincidences is usually a huge sign of lazy writing.

So, I was sitting there getting annoyed at what I thought were just ridiculous instances of dumb luck, but little did I know a lot of what was happening was actually planned by the bad guy. The writers do a decent job of tying up most of the coincidences at the end, but by that time I had already started deducting stars. Actually the ending really saved this movie for me. It went so against Hollywood convention, it’s shocking somebody at the studio didn’t’ put the kibosh on it. You know, just for that, I’m adding an extra half star.

Actually, maybe I should deduct it again, as I was once unwittingly duped into doing free work for the director, Mark Pellington, when I was working at a commercial/music video production company a few years back. His producer, Tom Gorai, had an assistant who left, and he somehow finagled me into doing producer’s assistant things for him and Mark, when I was in fact supposed to be working for the production company and not for his side projects, which I think turned out to be a movie called Destination Anywhere, starring Jon Bon Jovi. Anyway, I was just in awe that the director of Pearl Jam’s Jeremy video would have me doing stuff for him, that I ignored his blatant lies about this being a project connected with the production company. A few years later I saw Pellington on a subway, and pointed him out to my now wife, telling her that he directed Jeremy, and that he’s a really nice guy (he actually is). He proceeded to drunkenly exit the train, drop his drawers and piss on a dumpster at the 23rd street stop. Classy.

So, I digress. Despite Pellington’s lack of peeing judgement, and somewhat suspect business practices with $400-a-week production assistants, he did a pretty decent job directing this film. The feeling is at the same time glossy Hollywood and indie shaky-cam. Try hard, you’ll be able to picture it. If you’ve ever seen a Jeff Bridges movie, you know exactly what to expect from him. He mumbles through his lines, looks incredibly disheveled, and has this weird buggy eyed thing that he does to convey fright and craziness. At times during the movie, I felt as though I could have been watching a million other thriller flicks, especially Bridges other mad bomber flick, Blown Away. I used to hate Bridges, especially after seeing him in the horrendously horrible Fearless, but he’s grown on me incredibly after he appeared as “The Dude” in The Big Lebowski. Come to think of it, he plays downtrodden and sloppy in The Fisher King too. I guess the guy is a little typecast, but he does an admirable job as the paranoid professor of terrorism.

Tim Robbins is a weird guy. I think he does just about everything to avoid being typecast. He could have easily gone for all the dopey guy rolls after Bull Durham, but has really switched it up, choosing the amazing part in The Shawshank Redemption, evil politician in Bob Roberts, tormented soul in Jacob’s Ladder and The Player, back to wide-eyed innocent in The Hudsucker Proxy, and now brilliant, disturbing terrorist in this film. Despite a few clunkers along the way, like the Scott Rudin-produced I.Q., he’s done an admirable job of picking good, varied roles for himself. Here he is the baby-faced suburbanite with the respectable job, who is married to the Stepford wife (Joan Cusack). The casting could have so easily gone the other way, with the incredibly innocent looking Robbins playing the college professor who is tortured with his knowledge of the evil things his neighbor is plotting, and the wild looking, stammering Bridges playing the anti-government terrorist. Oh well, I guess that’s why I’m not a casting agent, and Ellen Chenoweth is. ‘

There was an alternate ending to this film that keeps the non-Hollywood ending, but gives a glimmer of that Hollywood tinge. According to the audio notes on the DVD, this ending was edited out due to time, but I think Pellington wanted to truly shock the audience by giving them absolutely none of those good feelings we expect to get when leaving the theater. Good call, dude.