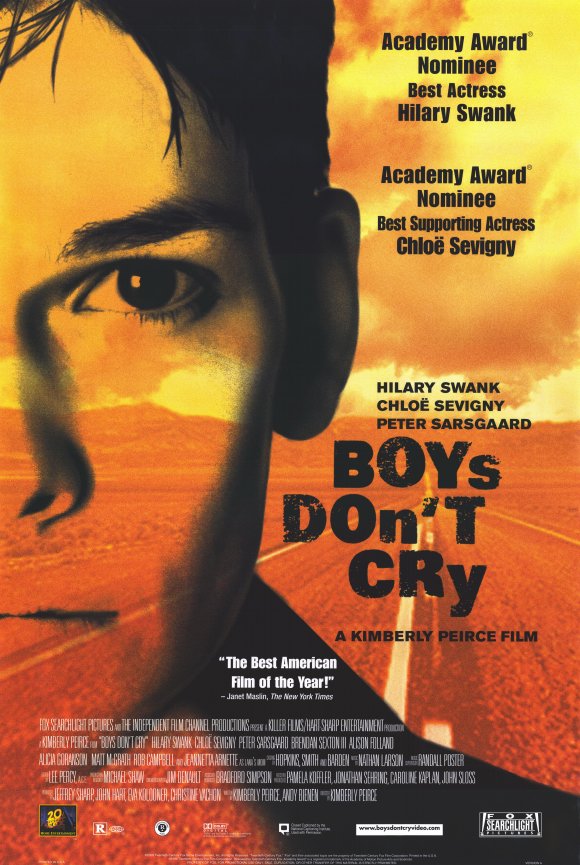 This is one of those films that is so was so hyped, you just knew it couldn’t possibly deliver everything you’d been promised. Unfortunately, this is exactly what happens in this awkwardly directed, typical indie film. Okay, I know it’s based on a true story, and that’s very sad, but as a movie, it’s pretty formulaic and predictable.

First off, we are supposed to sympathize with Brandon Teena/Teena Brandon, the victim of horrible prejudice and bigotry. Second, we are supposed to boo the guys in the black hats, the drinking, drugging rednecks who befriend Brandon when they think she’s a man, and abandon her when they find out she’s not. What we find out is that everyone in this movie is pretty despicable. Brandon is wanted for GTA and various other crimes. He/she drinks and drugs right along with everyone else, and, like a man, is basically after only one thing: the hot chick. This movie becomes less of a study in a tortured soul trying to live her life as something she’s not, and more about a guy/girl in lust with someone she can’t have.

Brandon comes into a tiny one-horse Nebraska town and charms the pants off of the town beauty (Chloë Sevigny/Lana). Of course, Lana thinks Brandon is a guy. Brandon’s really just a woman/felon with a sock stuck in her pants — or at least that’s how the movie, without a deeper understanding of what makes him tick, makes him look. Brandon also makes friends with the two town bullies, both of whom also hang out with Lana, and one of whom is in love with her. Of course, Lana likes Brandon because he’s new and exciting, and sensitive, unlike the other redneck “guys” in town. This plot has been done a million times (think: Footloose). Chick leaves what is old and typical for the new exciting guy, inciting jealousy, rivalry, and eventually combat. I saw the same thing in Here on Earth, and that movie absolutely blew.

Anyway, Brandon lusts after this chick, but never tells her the big secret until he’s accidentally discovered. We don’t get a sense of exactly what motivates Brandon’s love for Lana, except for the fact Lana likes him. We also get a feeling this isn’t an uncommon occurrence in Brandon’s life — falling in lust/love. These guys, despite their character, take in this woman as their buddy, and she lies and deceives them. Something just doesn’t click. We basically end up seeing Brandon as a liar, a thief, and a really bad friend who gets in over her head, pisses off the wrong bunch of gun-toting rednecks, and gets popped. Granted, they do rape her as retribution for embarrassing them when everyone finds out she’s a woman, but had she been a guy and done them wrong, they probably would have just killed him outright. And while that’s obviously not the message of the film (or life for that matter), the clumsy way they portray the relationships makes it come off that way.

It just seems the writers veered off the path somewhere, and ended up trying too hard to put together a cohesive, more traditional story, rather than sticking to the character study, which would have made a much more interesting film. I know everyone says Swank did a wonderful job. And she did for the most part, but the fact that these guys take in a scrawny, effeminate dude to begin with, makes me question the “realness” of her casting. The director also seems to be trying too hard to make this look like an indie film, with grainy shots, bad angles and the whole deal. I know it’s supposed to almost be a mockumentary style, but it just gets annoying. And, again, I know this is a true story, but I will say yet again, why does every fuckin’ indie movie have to end with gunplay, and people getting shot? It’s almost as if they sought out a true story (there are millions of them out there) where there was a shooting at the end, and they said, “Hey, now there’s a perfectly typical indie movie ending — let’s option it!”