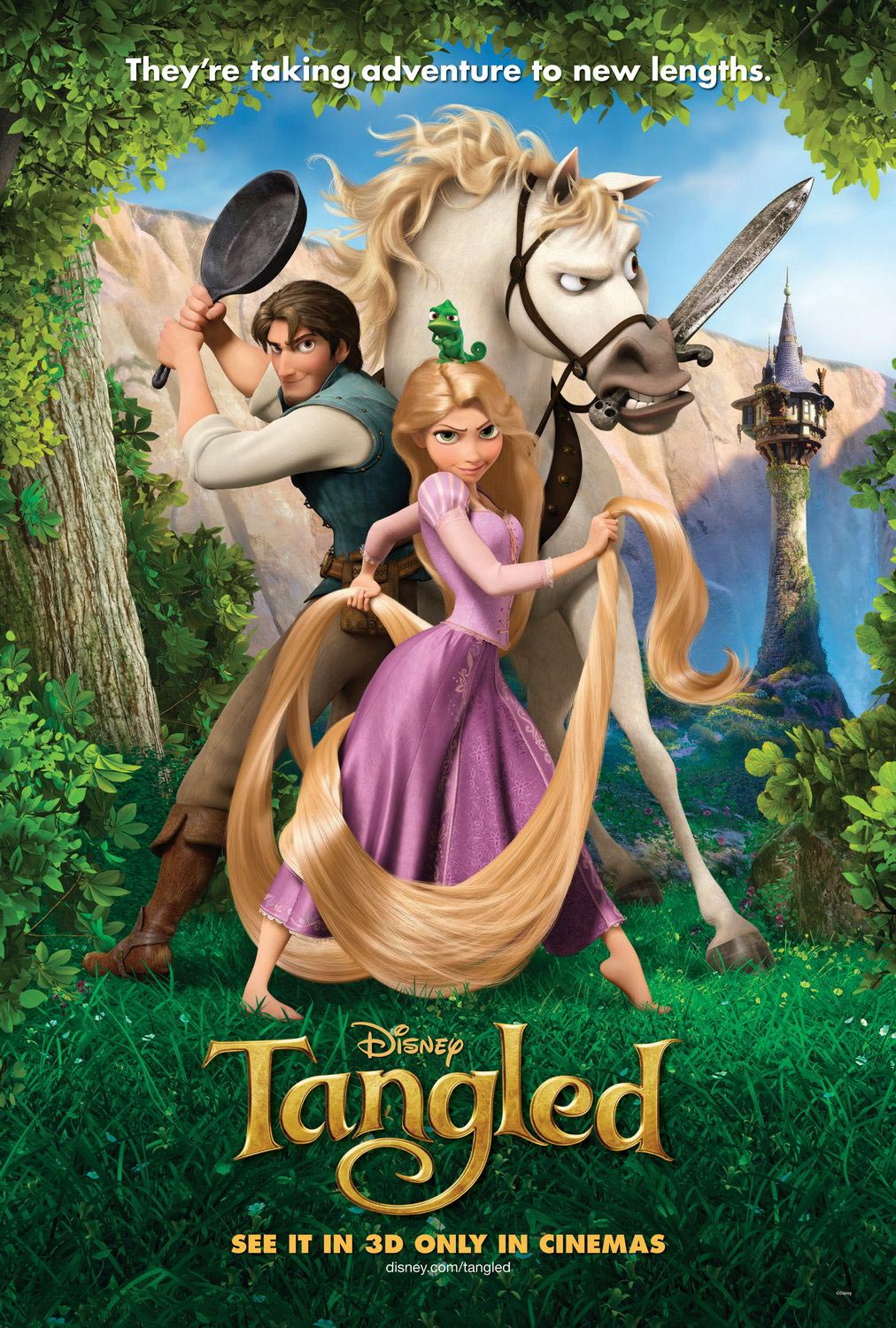 As a father, one is obligated to occasionally go to the theater to see children’s movies. The ironic thing is that it often becomes the only time that I get to go to the theater. I mean if I have a free night, I’m not going to go sit in the dark not talking to Ms. Hipster for a couple hours. I’m going to eat a good meal, drink lots of drinks and have a hearty conversation and debate with her about the fact that the most efficient meetings tend to only be scheduled for 30 minutes and last 28.

Tangled seemed like the least likely to offend when it came to a weekend jaunt to the movies. I knew it was a play on the Repunzel story, a story with which Hipster Jr. was and is familiar, so I’d hopefully be doing less “translating” during the movie. Granted, in a kid’s movie some talking is accepted, as children (along, it seems, with most women over the age of 65) have trouble following plots and need some explanation to put understanding back on the rails.

That said, it’s still a kid’s movie, so the plot has to remain relatively simple, standard and lesson-filled. This ain’t no Ponyo. In this version of the story, the Repunzel character gets this whole magic flower thing inside her when she’s an infant that makes her hair magic. This old hag figures out her hair is magic and will somehow keep her young if she can posess it. So she kidnaps Repunzel, who is the daughter of the king of the land, and locks her in a tower so she can continuously use the hair to rejuvenate her aging self. Meanwhile every year the king and queen and their happy subjects celebrate (well, not celebrate) the disappearance of the princess. Enter the rapscallion. The thief. The hooligan to come save her from the tower. The cocky douche with a heart of gold who hides behind his bravado, who has met his match in the form of this energetic dynamo.

Basically this dude, Flynn Ryder, stumbles upon the princess purely by accident and a deal is struck after she knocks his ass out. He will show her the world that she’s never seen and she’ll return the tiara that he had stolen and had in his bag when he invaded her tree tower. Let the wackiness and song commence! And God knows Disney loves those road movies (Bolt, anyone?). And they love those redemptive stories of the bad guy going straight and God knows they love those fuckin’ princesses. I don’t know if it’s wrong to cuss in the review of a kids’ movie, but I do know that all of this is kind of wallpaper. For a movie that reportedly cost $260,000,000, not a lot of it shows on screen. Sure, it’s 3D and stuff, but everything is 3D these days. And clearly they didn’t pay the script doctors to craft them something dynamic and original. They honestly fed this one into the plot-o-matic 2000 and hit enter. It’s not that the characters are terrible or the performances bad, but it just felt too predictable and too paint-by-numbers to make any kind of lasting impression. I’m sure this thing will sell a billion copies on DVD, and every little girl in the world will watch it at slumber parties and whatnot, but kids don’t know shit, do they? I mean, kids love that crap-ass Cars movie, after all.

This leads me to the overall issue with rating young peoples’ movies at all. They’re not really meant for me, so how can I give them like four or five stars? I can appreciate that some movies—even movies like this one—can be good for kids and enjoyable on some level for adults, but it doesn’t mean they’re necessarily good movies.