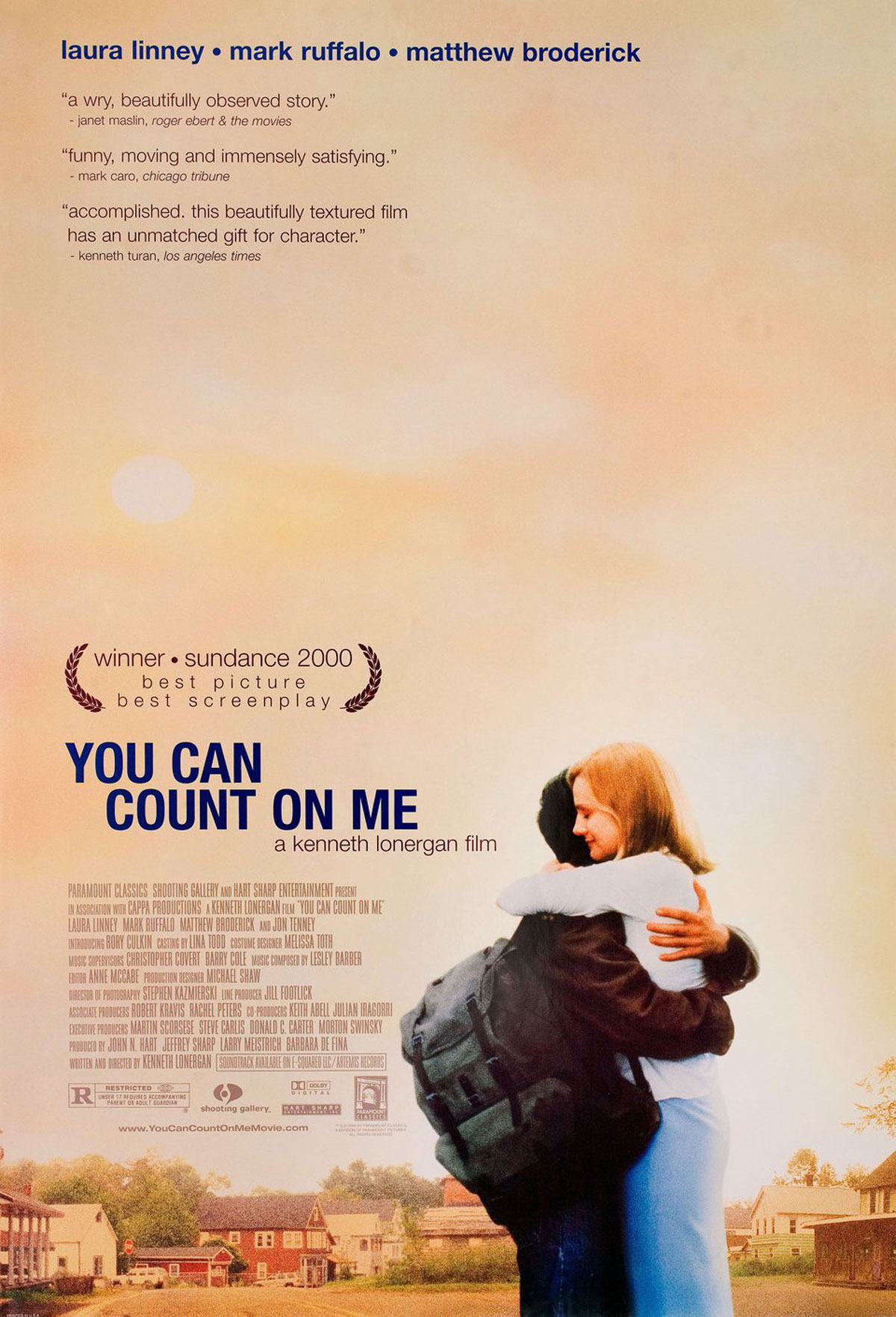 You Can Count On Me

I can’t say I was overly excited to watch this film the night I snatched it off of the video store shelf–despite it winning all those fancy film festival awards. After all, the title of the film hardly inspires anything but yawns, there’s a sappy picture of two people hugging on the cover and I think I’d been drinking (or not). So I got settled on the couch, drank four glasses of Diet Coke and prepared myself to be bored to tears by some melodramatic, humorless look at fucked up, crying people. I had an ice pick ready to go on the coffee table just in case the schmaltz got unbearable and I needed to remove my eyes from the process.

Luckily for me, the ice pick stayed on the table and I’m sitting here looking at the keys while I type (no I never took a typing class in high school, asshole.) Unlike most of the films I end up seeing on DVD, I had very little idea what this one was about. I had a vague idea that somebody would need to count on somebody else, and that two people (one blonde and one brunette) would hug at some point during the movie, but otherwise I was in the dark.

Interestingly enough, it turned out to be a story about a couple of siblings who were orphaned when they were kids, and how they grew into adults since. One, the sister, stayed in town, had a child and works at the bank. The other, the brother, is somewhat of a drifter, moving wherever there’s work, mooching money off his “responsible” sister and even serving a few months in jail at one point. There’s some discrepancy with the timeline (a pet peeve of mine), but I suppose I’ll let it go–despite the timeline making Mark Ruffalo’s character about 24 and Laura Linney’s like 28 or so (despite neither being anywhere near those ages in real life). I don’t know, I did the math in my head while watching it, and seem to recall these being the numbers… But, again, I’ll put it aside because I enjoyed the movie itself.

The relationship between the two siblings is at the center of the film. Ruffalo, who plays Terry Prescott, is a real find. This guy looks like a meeker (if there’s such a word) version of Vincent D’Onofrio, and has a quiet intensity that’s both creepy, menacing and endearing all at the same time. When we first see him, he’s a nervous wreck, uncomfortable in his own skin and full of tics and darting eyes. He can’t sit still or make any connection with other humans. At first I thought that Ruffalo just forgot about his character and settled down, but there’s an actual connection between when he starts to relax and when he meets his sister’s 8-year-old son, Rudy (played by the oft-working Rory Culkin).

Rudy is supposed to be the same age he was when his parents died in a car accident. He recognizes himself in Rory, and sees the opportunity to try to be the male role model that he never had growing up. The push and pull between the three characters is fascinating. I don’t know if it’s because I don’t have any siblings, but I hope it wouldn’t be anything like this. We see them judging each other, wanting certain things for each other, disappointing each other and ultimately understanding that they need to live their own lives. She seems perfect, but she’s not. He seems completely screwed up, but he’s not. Everything’s topsy-turvy.

The best part about the film is the writing and the acting. The two leads, Linney and Ruffalo, play off of each other wonderfully, and even Master Culkin gets in his good lines. The director/writer, Kenneth Lonergan, wrote a screenplay that reads much more like a stage play than a film. The thing I’ve noticed is that most plays have much better dialogue, and are much better character studies, than films. There’s nothing hip about this movie at all. It’s small town, nobody gets shot, nobody drives fast, and nobody even wears a leather trenchcoat. It has all the earmarks of slow cinema, but I liked it dammit.