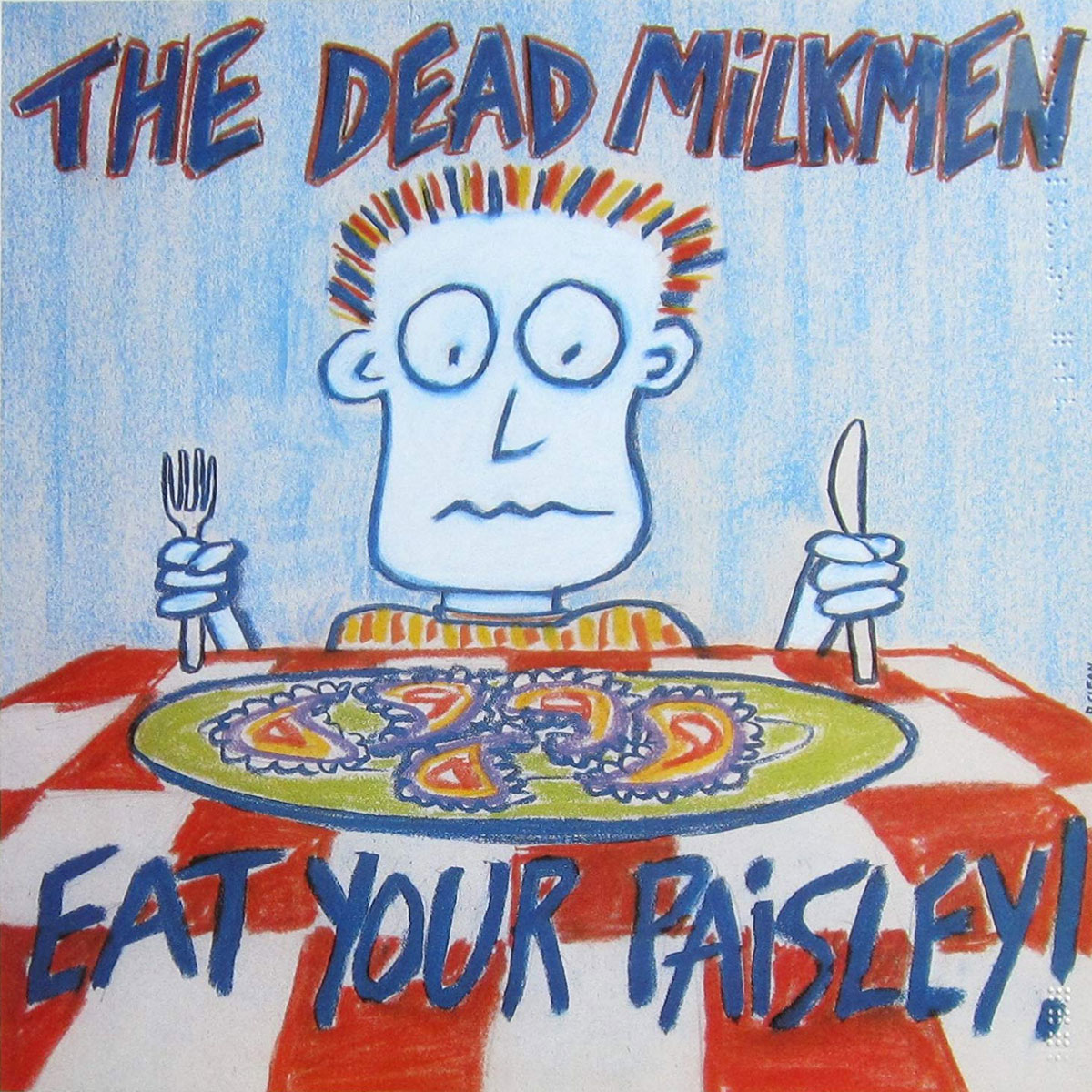 The Dead Milkmen: Eat Your Paisley!

I know this isn’t the “classic” album that Big Lizard In My Backyard is. You know, that album with “Bitcoin Camaro” on it? Wait, it’s “Bitchin’ Camaro?” Yeah, that one. No, not the one with “Punk Rock Girl,” the nominal MTV hit, on it. It’s the one in between that somehow captured my young, 1986 mind. Like to the point that was almost unhealthy. I wanted to mainstream  that jokey cowpunk right into my veins. I mean, to say this album is really good is to add one qualifier too many and is probably a little strong in the adjective as well. But, for some reason, I just loved this album. Loved it to death.

First, it was never really clear if The Dead Milkmen meant to be a real band. Sure, they played songs and stuff, but they really almost toed that Dr. Demento line in a way that was hokey at best, novelty at worst. But I think they meant their brash adolescent attitudes to be some sort of commentary on the seriousness of the punk scene that they were nominally part of. I mean, Jesus, those Philly accents alone have to be a joke. Nobody can be that Philly. It’s like they took the British thing and turned it on its ear and said, “Fuck you and your Euro accents and all those Americans imitating it, we’re gonna rock an unmistakable Mid-Atlantic twang that is so exaggerated that you can’t mistake it for anything but. Of course, as a kid growing up in California, I had no idea that’s what was going on. I just figured the guys were slow or something.

Whatever the case this was one of the seminal albums of my early teenage life, despite the fact everything you read about it says it wasn’t that great because it doesn’t have that “big” single. As if a band that received absolutely no mainstream radio played cared about that. Shouldn’t it be a cumulative thing when judging an album? Shit, they have classics (in my mind) like, “Where the Tarantula Lives,” “Beach Party Vietnam,” and “The Thing That Only Eats Hippies.” And those are just the songs that some may have heard of. It’s a 16-track album, and I remember each and every one like an old friend. Sure, the shit is kind of jokey and sophomoric, but it’s fun. It’s what punk was meant to be. It’s PiL and Butthole Surfers and NOFX and The Offspring and all that wacky stuff rolled into one. Plus, it reinforced my absolute hatred of hippies. Middle-school me approves this message.