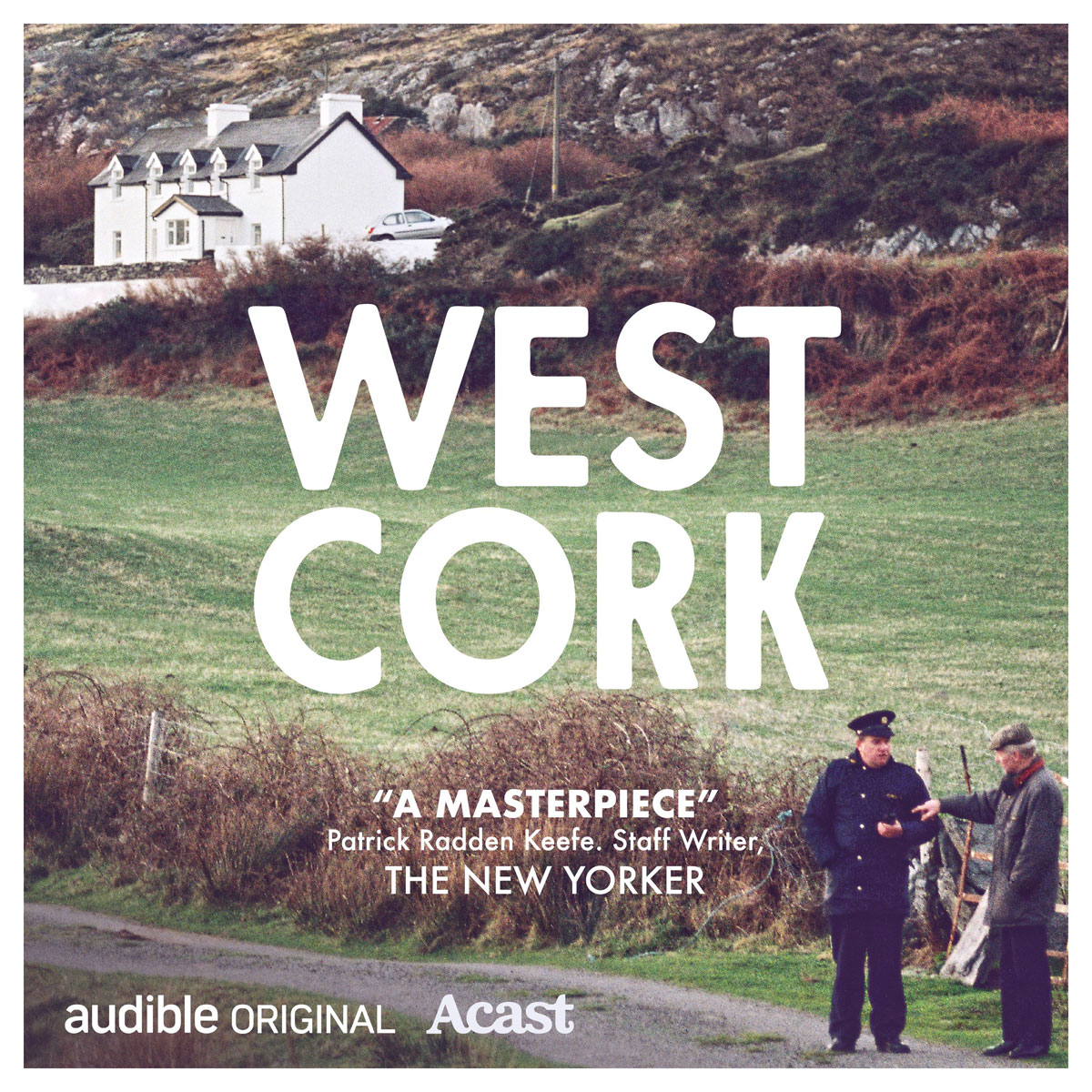 The podcast landscape is littered with these murder-in-a-small-town stories. So how does something like West Cork break through? It’s probably the Irish accents. And the prototypical sociopath at the center of the mystery. The type of man who feels oh-so-familiar after four years of one leading our country. Because even when you know and understand these people are rotten to the core, you can’t look away or avoid being sucked in by their absolute belief in themselves. Because it’s so foreign to those of us who live with lingering doubt about everything from our height to our hairline to if we should have maybe ordered the chicken and not the fish.

So when French TV producer, Sophie Toscan du Plantier, ends up dead in her West Cork garden, who else are you going to look at other than the local narcissist with a history of battery? Even if there’s very little evidence that he actually did it? Because West Cork isn’t a place where people are murdered. It’s a sleepy corner of Ireland where weirdos end up. People who are either outsider artists, or hippies or folks from more populous areas just looking to live a more solitary life. Or, like Toscan du Plantier, a “blow-in,” which is basically a person who is not from West Cork, but comes in on occasion to hang at their vacation house or play rural pioneer.

The man who would become the one and only serious suspect in the murder, Ian Bailey, was hardly a blow-in, though the locals would label him one. A British dude, he had lived in the area for about four years before the murder. He was known to folks and had — because of his eccentricity, propensity to drink way too much and the visits from the cops for beating his live-in girlfriend — garnered a reputation as a dude who might be the first one to come to mind when a woman ended up beaten to death outside her house. Again, not a thing that ever happened in this little, idyllic town. Did we mention that Bailey is a “freelance journalist?” One who just happened to be in this town where this murder reverberated across Ireland and the woman’s home country of France? A journalist whose career had started off promising, but had taken a sharp, downward turn since his original boss and co-workers in England soon realized that he’s just not a guy you can trust or rely on as a human being. And this case just so happened to drop in his lap — the man on the front line of an international story that he may just have had a hand in.

The podcast does a wonderful job of easing us into the world of West Cork. Describing a country I’ve been to a couple times, but didn’t really understand the isolation and wildness of a place like West Cork. A town of seeming eccentrics, who embrace that lifestyle, but also value their privacy and the calm that living off the grid brings. It’s low-key. Antithetical to Bailey, with his long black coat and druid staff and his poetry readings and his drinking and look-at-me attitude. The residents want to be under the radar. He is a man who craves attention. Basks in the spotlight. Feels he is meant for something larger, but is completely unwilling to put in the work to make that happen. And, through hours and hours of interviews, clearly has no qualms about living in a fantasy world that he has created in which he’s the center and side and the other side. You hear him talk — and the podcasters let him do that with little interruption — and you know him. You can hear his brain ticking. The grandiose sense of self. It’s horrifying and fascinating at the same time.

And that’s the thing about the pod. It really envelopes you in the crime and is incredibly not judgy about any of it. The hosts lay out the facts, while engrossing you in the majesty of the area. There is no side commentary or verbal eye-rolls when Bailey — through luck, police ineptitude or his own deception — manages to never get indicted for the crime. And, look, the evidence is circumstantial and/or thin, but it is 100% clear that Bailey is a creep. At the very least. There are some loose ends that never really get addressed — like why Sophie was outside in her bed clothes, but in big, lace-up boots so late at night? She didn’t know Bailey, as far as we know, so was it a crime of convenience (she was outside for some unconnected reason) or did he somehow lure her out? The guy is, by all accounts, intelligent when he wants/needs to be, but he’s also a bad drunk who didn’t sound particularly in control when he imbibed. So a spontaneous drunken plan to get a strange woman to come outside to get beaten to death doesn’t sound likely. Who knows?

I know there are a lot of these true crime pods out there. I’ve listened to a bunch. And in almost every case it feels like the producers of it are reaching for content. Or they kind of lose the thread and meander a bit. Sometimes coming back to the main line. Sometimes not. West Cork manages to keep focus and actually builds over the course of the fourteen episodes. It’s expertly done. That said, we know that we have tried to really pull focus on the dead-female-body conversation in the past couple of years. There have been so many dead bodies. So many dead female bodies. In the past we’ve really focused less on the victim than on the criminal. In fact, sometimes that dead girl or woman is barely named, or we have no idea who she was as a living human being. Because everyone knows that murderers are always more interesting than the normal folks they kill. This pod was originally released in 2018, which was probably on the cusp of that shift. So it doesn’t surprise me that it took until the finale for us to really talk and think about who Sophie Toscan du Plantier was. And that episode, I believe, was a bonus episode put out after the original run. If this were to come out in 2021, I feel like we would have focused on her much more than we did in this series. I know it’s tough with a dude like Bailey skulking around, but she turns out to be a pretty fascinating person in her own right.