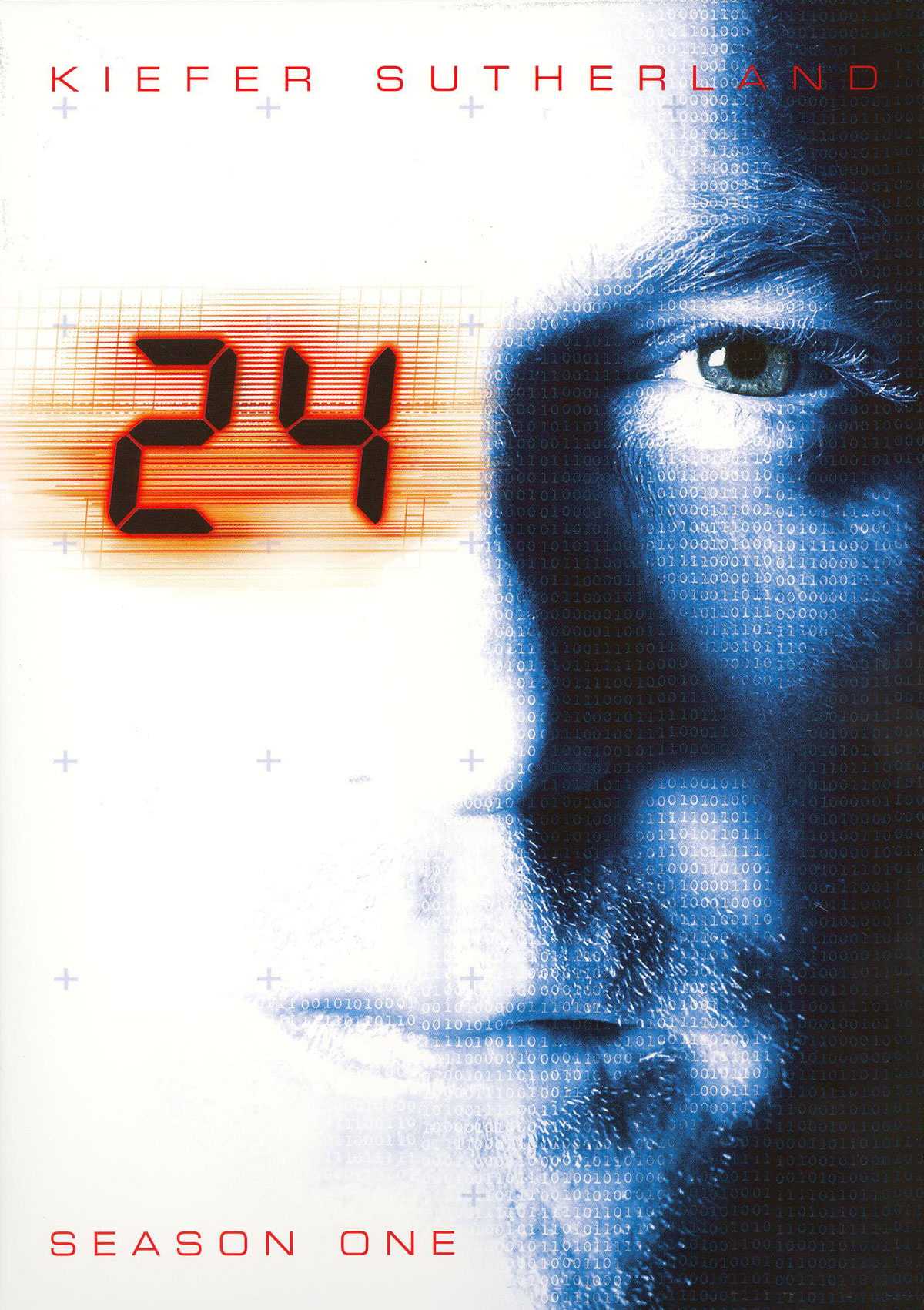 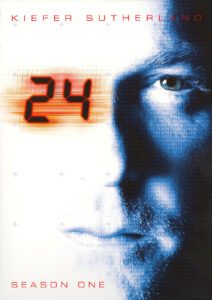 In the four seasons of 24 Jack Bauer has died twice. His wife was murdered by his future girlfriend, whom he ended up killing in cold blood. He has been a suspect in the assassination attempt of the president and a heroin addict. He has been fired by his counter terrorist unit, CTU, at least ten times, and ended at least one interrogation by beheading the interviewee. He, like the show, is completely earnest and without humor. He constantly squints, scowls and rips into subordinates and superiors. He has killed and/or disabled countless bad guys–and even some good ones. All this, and the man is strangely co-dependent, latching onto a new woman in every new season–a new woman who he will ultimately have to save from some Middle Eastern or Eastern European baddie at some point. 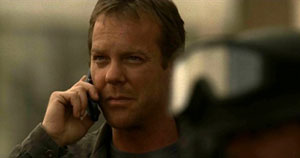 The show has utilized a grand total of about 10 locations, reusing the same hillside location several times in each season. If you had never been to Los Angeles, you’d think the whole thing was just rolling, brown hills full of shrubs. Like the locations, plots are the same every year, with little twists thrown in here and there. Inevitably Jack will be accused of something he didn’t do, and he will have to go rogue to both prove his innocence and foil the terrorist plot. Someone he loves will be kidnapped, and someone inside both CTU and the office of the President will turn out to be working in cahoots with the terrorists. How ’bout some background checks here, folks? Someone will “open a socket” and tell Jack that something he’s doing is “against protocol.”

One thing that may actually be the show’s attempt to interject a little inside humor is what seems like the never-ending battle for the upstairs, director’s office at CTU headquarters. Every season someone comes in and displaces someone else from that office, only to be supplanted by another and so on. Of course that’s probably me projecting. Despite the repetitive nature of the plotlines and unsmiling characters, the show is almost better for them. I get giddy with excitement when Jack straps on his Felix the Cat, black messenger bag, cuz I just know he’s going to kick ass. I love that, with the exception of Jack, nobody on the show is safe. They will kill off anybody. They’ve killed women and children. Hell, they’ve killed dogs! The first episode of season five alone, they killed off two major characters.

The driving force behind the absolute awesomeness of the show is Kiefer Sutherland. The man hasn’t cracked a smile in four years. It’s gotten to the point that it’s difficult to separate the actor from his character. At awards shows he seems distant, reserved, suspicious, pissed off, and just a little dangerous. Maybe he’s always been like that, but I swear he’s taken on the persona of Jack Bauer. His supporting cast is hit or miss, with frowning Chloe (Mary Lynn Rajskub from Mr. Show and The Larry Sanders Show) and lisping Edgar (Louis Lombardi from The Sopranos) almost comic relief in a sea of intensity. One of the worst performances ever caught on film was turned in by Dennis Hopper a couple seasons ago as Serbian warlord, Victor Drazen. The man almost single-handedly ruined the acting industry–it was that bad. This year they seem to have gotten it right with the diminutive Sean Astin playing the boss’ boss (and playing it completely straight), the terrific Jean Smart as the bi-polar First Lady and that chick, Connie Britton, from Spin City (the first one of his lady loves to break the 100-pound barrier) as Jack’s latest lady friend. I don’t where they dug up the greasy teenager playing her son, but he seems like another weird bargain basement choice made on a dare or as a favor to one of the show’s producers. There is a rumor that Jack’s hot-as-hell daughter, Elisha Cuthbert, is coming back after a year off. Maybe this year this uneducated nanny, who somehow became a systems analyst for the CIA with no training or experience (nepotism anybody?), will come back as like CEO of a Fortune 500 company. Who knows what will happen in the wacky world of 24? Whatever the case, and no matter how many people they kill off, this show will always be engaging and compelling. It’s one of those shows that its okay to talk through, as you spend half the time laughing out loud, smacking your head and wondering to anyone within shouting distance, “What the hell?! I can’t believe they just did that! This is the most ludicrous thing I’ve ever seen–and I love it!” 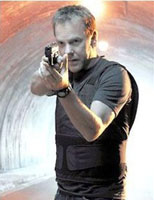 you can’t tell but i’m totally gonna shoot you.