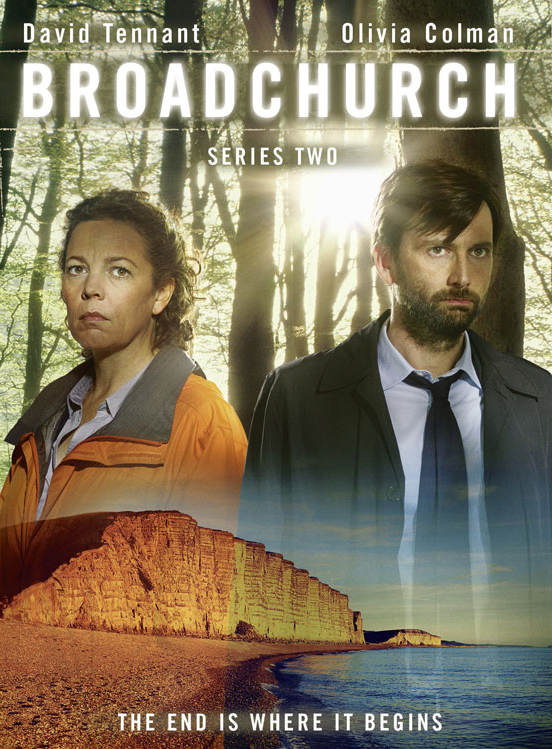 It’s impossible to not spoil season one of this show while reviewing season two. Season one is a whodunnit, involving the murder of a young boy (what else would a depressing British series be about?) at the end of which we find out just who dunnit. Season two is the ensuing trial and the impact it has on the small seaside town of Broadchurch in which the murder occurred. So, if you didn’t see season one then you should click away and go do it now!

Okay, so we know the child murderer in season one turns out to be Ellie Miller’s, one of the two detectives actually investigating the murder, husband. Talk about awkward! We know he was having some sort of inappropriate relationship with said boy (who was also his son’s good friend) and he killed the kid in a fit of jealousy and/or fear the boy would expose their relationship and get him in trouble. He confessed to all this at the end of season one. Thing is, he takes it all back in season two, lawyers up and goes to trial with a lawyer bent on getting him off at any cost. This recanting of the facts is a shock to everyone, including his wife and the boy’s parents and threatens to, once again, tear apart the town as they are put through a high-profile and emotional trial. A trial where everyone in the joint knows the accused is guilty, but the accused doesn’t seem able or willing to take responsibility and almost starts to believe his own denials. Is he traumatized or faking? We don’t really know, but the writers, who portray him mostly as a sniveling, stupid idiot, clearly don’t want us sympathizing with him too much.

So while this trial is going on (which some interesting backstory between the defense team and the prosecutor, who is an old superstar pulled out of retirement to try to get a conviction for the town and family) the other cop in the duo has an old case — thee old case — come back into his life. This is the case that has haunted him, of course. Which also involves the murder of a young person back in his old hometown. So while we litigate the known in court, the other cop tries to track down and solve the original mystery that drove him to the outer-reaches to begin with.

I really liked season one of this series. It had a little too much melodrama at points, but was well-told and the acting taught. Season two was set up interestingly, as we watch a man we clearly know is guilty try to wriggle out of his own treachery. Each character takes his or her turn questioning him as to why he would put everyone though this. He never really has a good answer, but clearly reality starts to slip away from him as he faces what it is he’s done and can’t admit to (even though he already admitted to it in season one). It seems the focus of the season is going to be on the trial, but it feels as if the producers looked at the plot playing out and realized it might be a little slow looking at the sad-sack accused husband sitting in his little glass box every episode while the other characters either wipe away tears, yell, curl up in a ball crying, or both. So they threw in the B plot of Alec Hardy’s, the other detective on the murder case, old case coming back to life. And the guy he fingered coming back into his world in order to presumably torture him. Thing is, the B plot quickly overcomes the A plot and the active investigation overtakes the more interesting psychological impact of the trial.

The acting, as is the case with most of these British dramas, is top-notch. David Tennant — who was apparently one of those Doctor Who dudes — is constantly bedraggled and put upon (and ill) and is an amazingly engaging guy despite looking as if he’s going to die just about every second of the series. You just want someone to give the guy a damn hug. And Olivia Colman (despite missing an ‘e’ from her name) is a great example of how the Brits can take an actress who looks like what she is and play a normal human being and not a model on whom they’ve thrown some baggy clothes and call her a cop in a small town. Some of the subplot around Hardy’s old case back in Sandbrook is a little convoluted and, honestly, a little silly when viewed as a whole. It’s one of the weaker parts of the show, and the actors in that subplot are pretty slappable in their tendency to play scenes in a way that is a little jarring as compared to the more subtle main plot and crop of actors. There’s mention of the Sandbrook murder case in season one and how it has negatively affected Hardy and driven him to Broadchurch to avoid the embarrassment and stress of that case, but the surprise reveal of the the whole through line of the hidden witness from the Sandbrook case actually being housed in Broadchurch the whole time came off as a little bit of an add-on to me and really felt like a forced plot device that didn’t work.

That all said, season two is certainly worth the watch. It’s not as strong as season one, and answers a bunch of open questions from the earlier episodes, but you’ll have to put up with a few eye-rolling moments, some strange diversions and a couple wtfs to get there. I wish they had just stuck with fleshing out the backstory and in-betweens from season one, along with the inner-workings of the trial and its effect on everything rather than delving back into Hardy’s old case files. They should have just left that for season three, which I understand will be coming. I already have it on my Netflix list to flag as soon as it’s in there sometime during the second or third year of the Trump* presidency.

*If you’re reading this after the election of 2016 and this hasn’t come true, I think we’ve dodged a major bullet. If it has come true, you probably won’t ever see season three because Trump apparently hates everything foreign and has probably built a virtual wall to stop you from viewing British television shows.