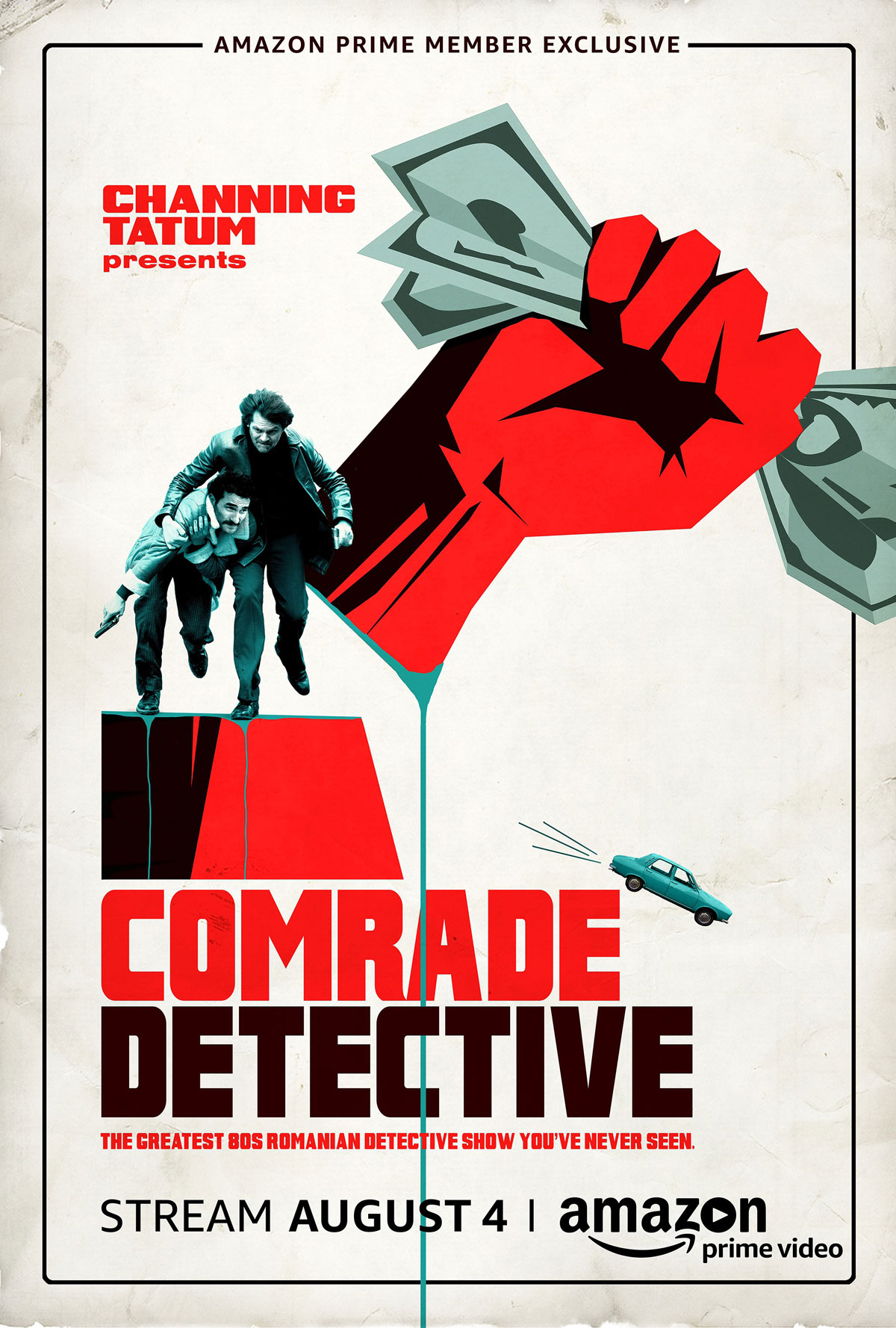 Comrade Detective is just as weird as you imagine it might be. Posed as a lost Romanian cop show from the eighties (before the fall of the iron curtain), it is “presented” by Channing Tatum and gonzo journalist, Jon Ronson. They sit in a screening room describing the provenance of the program before a couple of the episodes as if it’s a real thing. It isn’t, of course, but they kind of tongue-in-cheek sell it. They went so far as to hire an entirely Romanian cast, had them speak Romanian and had them run around the alleys and avenues of Bucharest. Of course they dressed the characters and the sets of the time, the film quality had that 80’s quality and the props and whatnot reeked of the Reagan era. To make it palatable for the American audience (again, as if this was a real thing), they overdubbed the characters’ Romanian with English, casting a bunch of known American actors/comedians for each main voice role. Yes, your friend, Channing Tatum, voices the older, tough-guy cop, Gregor Anghel, and 3rd Rock from the Sun breakout star, Joseph-Gordon-Levitt, voices the fish-out-of-water newbie, Iosif Baciu. You felt a little out of time there, didn’t you? Exactly!

So, yes, this thing is relatively high-concept in a post-modern kind of way. The murder mystery itself is completely absurd, of course, but the fun presumably isn’t in trying to figure out why the heck there’s a dude in a Reagan mask running around kind-of, sort-of trying to spread Western ideals in this communist country. It all starts with the most cliched plotlines in buddy-cop movie canon, with our main character’s partner being murdered by the aforementioned Reagan impersonator. Then this surviving veteran is saddled with some country yokel cop who is equally invested in solving the old partner’s murder. And in solving the murder they uncover the conspiracy to indoctrinate the commie-loving citizens of Romania into the world of blue jeans, sex and rock music. And this is where the show throws its comedy into it. But like not ha-ha comedy. Comedy if you find awkward commentary about distant 80’s American trends filtered through the lens of what is supposed to be communist propaganda funny. While also making fun of that same communist propaganda. Yes, it’s that snake-eating-its-own-tail weird. I mean when you’re making jokes about how Jordache dungarees (while not being able to properly pronounce “Jordache”) are the product of the whorish Americans, which will take down the iron curtain, you know you have an oddball group of writers writing for what I can only discern is a non-existent audience. Seriously, who the hell was asking for this? But, strangely, I didn’t hate it. I didn’t love it, mind you, but it’s just a little bit better than you’d think it would be.

The thing is, they don’t totally play it straight. They clearly go through all the machinations of the slightly mind-bending world of the cold war that was both terrifying at the time and oddly nostalgic in the present day, but they litter the dialogue with profanities, incorporate graphic violence and sprinkle in the nudity. It seems incongruous to me with the time and subject matter and kind of took me out of the world. The world that I’m probably not supposed to take seriously, anyway, but if you’re gonna go for it, I feel like you should go for it. Why invent this whole Romanian Film Preservation Society and the wacky backstory of this found television series only to add a disorienting layer of modern, almost Apatow-ish nonsense on top of it? The thing looks great and there is some attempt to make the characters talk a little bit like you’d imagine they’d talk, but the writers just can’t seem to help themselves — or perhaps Tatum and gang ad-libbed some of the goofiness and cussing that eighty-sixes some of the better touches. That all said, at its heart the show is relatively entertaining, but it’s clear the creators came up with this outside-the-box idea, fell in love with it and then kind of spun their wheels a bit narrative-wise once they got into laying out the plot. It goes a bit haywire at times, and really amounts to very little, but it is fun to watch our characters walk into a strange Romanian club filled with hundreds of extras with Ronnie masks on and react to their first sip of Coke and bite of a Twinkie.