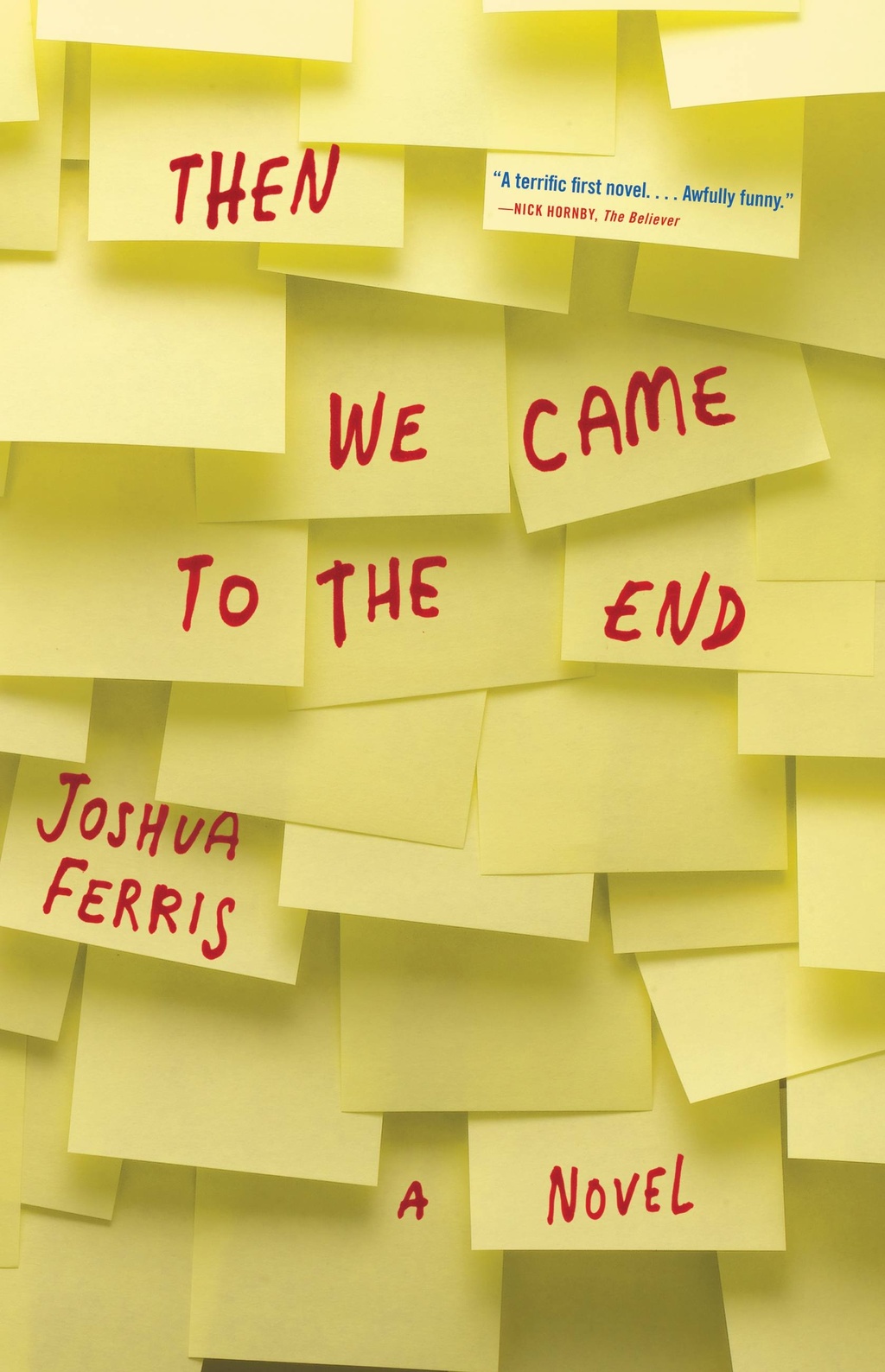 Then We Came to the End

So we all remember reading Bright Lights, Big City and its mind-bending use of the second-person narrative structure. You felt immersed in a very drugged-out kind of way. It was familiar, yet foreign. But somehow it worked perfectly for the story. And now, in this book, we have the first-person plural approach. And while it too is off-putting at first, you gotta admire a guy who’s willing to attempt it, as it’s almost completely impossible to sustain (and he does break it for sections of the book where the ubiquitous narrator is offscreen, so to speak). But it too is used to elicit a feeling. In this case it’s not the disorienting, funhouse mirror of Bright Lights, but the weird group-think thing that happens within companies, and more specifically within ad agencies. Ad agencies, which are in some regard like a mixture between a crew team and a prison.

This particular ad agency is inhabited by all sorts of characters, all of whom are on the chopping block as the world of advertising spirals the drain after the tech bubble has burst in 2001. So, imagine, if you will, that same prison where every inmate is on death row and the priest and warden walk down the row every couple of days to fetch someone from his/her cell to string ’em up. Nobody knows who’s next and everyone is on the block. Aside from the fear of firing, the other phenomena that occurs at an agency in a downturn is boredom. This boredom can fuel more paranoia in some, but in others it just brings on jevenile nonsense, mostly in the form of gossiping and finding professional ways to waste time. The author does a great job of conveying this group-boredom mentality, as teams of people constantly move from location to location in the office searching out new and better stories from and about their co-workers, new and exciting ways to torture said co-workers and new and inventive ways to throw each other under the layoff bus. It does capture that vibe pretty well. One book I almost got through, The Pale King, tried to sum up professional boredom in a more cerebral way, but being bored myself at some past jobs, this is a much more realistic attempt to bottle that experience — especially within an agency of creative people.

All that said, this approach is not without its flaws. The book, because of its first-person plural conceit, never gives us any idea about the narrator or his perspective. He is speaking for everyone, while also speaking for no one. Through his eyes we see others in his group, but we miss out on that look in the mirror that helps us understand the motivation of the narrative. And, while some of the stories he is there to witness (or is it merely the collective us, which the book suggests, and there is, in fact, no narrator acting as the hub at all) are funny and interesting — especially having a decent understanding and experience within similar atmospheres — that narrative often feels like a patchwork of these tales all loosely woven together by a group of which we are not a part. Additionally, there is some inconsistency in terms of the tone and voice. It’s not that we should shy away from dramadies, but it felt as though some of the drama was added to make this a more “serious” book and not just a light-hearted attempt at a workplace comedy. Generally child abduction, cancer and mental illness are all kind of a bummers and while he did a decent job somehow making these things part of the funny mass delusion suffered by the book’s co-workers, it delved, at times, into areas that made it feel like a different book. Again, I didn’t hate it. It just felt incongruous with the more clever parts.

I do think that anyone looking for a more modern, more realistic (but less sexy) version of Mad Men may want to pick this thing up. It certainly has some issues, but all in all it was an enjoyable and familiar read that brought back some memories and reminds me now that I should really follow up on that novel-writing class I took.